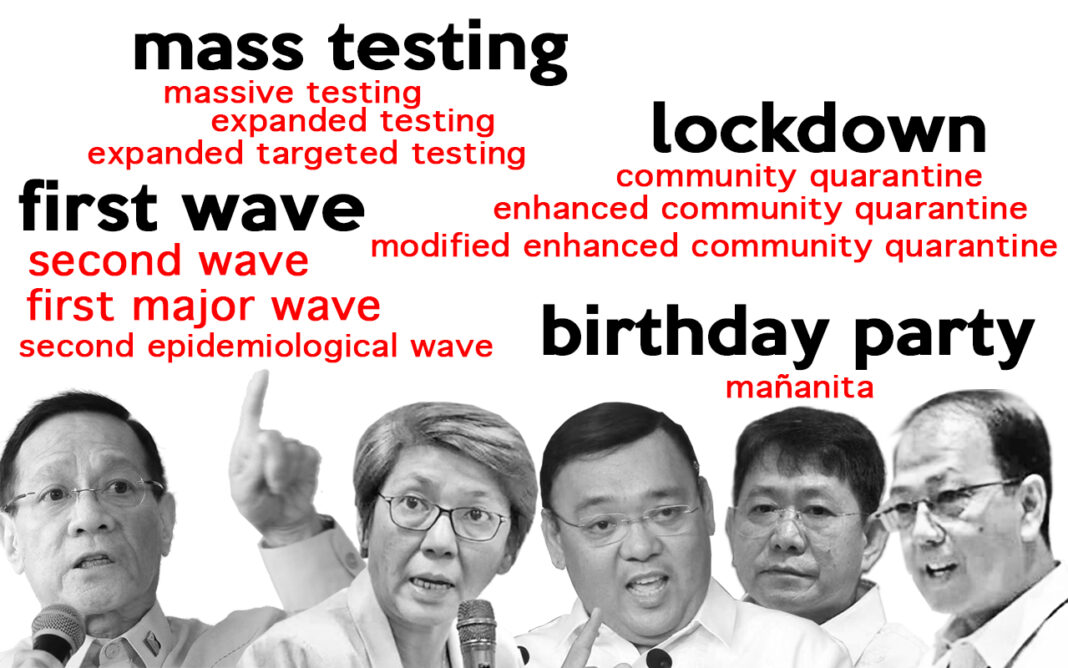 If the government has not succeeded in achieving the testing capacity it set or doing mass testing at all, they have at least widened our vocabulary and made up new words and labels for things that people can easily understand otherwise.

The words of those who speak these confounding terms bear a lot of weight given their role in the government’s pandemic response. The weight of why the public has to be put through this rigmarole is heavier, and has had the effect of confusing, frustrating and/or deceiving people.

Let’s talk a little walk down memory lane and refresh our vocabularies.

President Rodrigo Duterte announced that he has imposed ‘community quarantine’ over Metro Manila from March 15 to April 14.

[We don’t want to use lockdown because you are afraid]

But the following day, members of the Inter-Agency Task Force on Emerging Infectious Diseases (IATF) started ‘cleaning up’ after this statement of Duterte, insisting the imposition was not a lockdown. Pro-government trolls did the same, even going after media outfits that use the term lockdown and branding the use of the term as fake news.

Two days later, Duterte imposed an enhanced community quarantine or ECQ (and will go on for two months).  Department of Interior and Local Government (DILG) Secretary Eduardo Año said that the ECQ is like a total lockdown. So was the community quarantine after all a lockdown, ‘cause the step up is a total lockdown? But anyway, trolls fiercely attacking people who called the lockdown a lockdown died down on this issue after Año’s statement.

Upon the third extension of the lockdown in Metro Manila, the government placed NCR under modified ECQ or MECQ, that is in practice similar to the community quarantine in the beginning, albeit the ‘stay at home’ rule is stricter. Of course, there is also what they call the general community quarantine (GCQ) or the “new normal.” There were areas the government no longer placed in any quarantine, but their local government units wanted to be under quarantine and also to qualify for national government aid. The NTF changed the guidelines anew and placed those areas that they first decided to be no longer in quarantine in ‘modified GCQ.’

NOMENCLATURE: Words (including acronyms) can dilute. ECQ, GCQ and Modified ECQ tend to hide the fact that what is being imposed by government is a lockdown. Media are better off using "lockdown," with an explanation of some modifications. In shaping public opinion, words matter.

But, why call it a quarantine anyway? When the lockdown was first imposed, there were only 52 cases, 3 deaths and less than 1,000 tests. There was no mass testing or other medical interventions to have a scientific basis and insightful projection that should or should not warrant a lockdown decision. There is no effective isolation up to now, as only 14% of confirmed cases are confirmed admitted in the hospitals. And here we are, with 13,597 cases later and growing, and at least 857 left us (as suspect and probable cases deaths have not been counted).

The national government continues to struggle with mass testing, while it has changed at least four times how it will call the testing to be conducted in the country—from mass, massive, expanded, and expanded targeted.

For a few weeks since the start of the lockdown, the national government was firm on this: mass testing is not needed. Public clamor for mass testing was finally heeded on April 3, a few days after Duterte’s “shoot them dead” remark. Newly-appointed National Task Force COVID-19 (NTF) chief implementer Carlito Galvez, Jr. said on April 3 that “mass testing is ongoing”, the government will do “massive testing” by April 14 and the number of tests conducted leapt from 5,000 to 16,000 in a day. Department of Health (DOH) Undersecretary Maria Rosario Vergeire, who probably stated “mass testing is not needed” more times than any other spokesperson during this time, backpedaled following Galvez’ statement and said the DOH has been doing mass testing from the beginning following a risk-based protocol. A doctor who is consultant to the IATF explained that massive testing would test more than mass testing.

Nearing their April 14 mass testing promise, the government said instead they will do progressive testing with the target and capacities gradually increasing so they could do expanded testing. Adopting revised testing protocols that changed only in that it included frontliners with symptoms, they said they would do expanded targeted testing. They soon dropped any mention of mass or massive testing.

On May 18, Presidential Spokesperson Harry Roque said the government has no program for mass testing yet due to its limited resources and the private sector must shoulder this for their workers who are going back to work. This statement drew the ire of many, who thought the first month-long total lockdown extension in the whole of Luzon from April 14 to 30 was supposed to be so that government can commence mass testing on April 14. Roque later clarified his statement that the government is doing expanded targeted testing and not mass testing because they cannot test everybody. Whoever said when the public called for mass testing that they were asking for 106 million to be tested?

Around the world the term mass testing is used and a common understanding is to be able to test as many as those who needed to be tested and as many as government needs to determine their actions with regards to the COVID-19 outbreak—contacts or asymptomatic persons with contact to positive cases included hopefully. But even in the classification of COVID-19 individuals, the DOH dropped monitoring and reporting of contacts (previously PUMs), so the testing protocol is limited even as they try and try to refine the label they want to call it.

When the May 8 birthday party of National Capital Region Police Office (NCRPO) chief Major General Debold Sinas amid ban on mass gatherings was exposed through the photos posted by his own office on May 12, Año said that it was not a party, but a mañanita—a tradition in the police force to welcome their officer’s birthday. Sinas and his office may have been more forthcoming in this matter as he listed in the NCRPO website in his day-to-day accomplishments his May 8 “extraordinary birthday celebration.”

The NCRPO plays a major role in the implementation of the lockdown in Metro Manila, while the police is an attached agency of the DILG and Año himself is the vice chair of the National Task Force on COVID-19.

People were confused and angry when DOH secretary Francisco Duque III said we are already in the second wave of COVID-19 transmissions on May 20. This was followed by an explanation and reiteration from Vergeire, as the DOH has been talking of flattening the curve and delaying a third wave since May 6. This was opposed by doctors and the public who argued how can we have a second wave when we have not flattened the curve. The Executive Secretary, DILG and Duterte through his spokesperson would contradict Duque the following day and affirm we are in the first wave, and the DOH would retract his statement. A senator remarked that if what Duque said is true, then we are the only country who has identified and admitted being in the second wave and that our response was not able to prevent the second wave.

Duque would go on to explain that he meant we are still in the first major wave, that is also a second epidemiological wave. With that statement of Duque, some netizens thought that despite the DOH’s retraction, its secretary has not conceded his position that we are in the second wave.

The DOH did but his use of “first major wave”, as explained by Dr. John Wong, is another term for second wave. And for as long as he calls it the first major wave, he has not conceded. Dr. Leachon describes the 1st 3 cases as index cases, not 1st wave.

We are in the first wave.

How has the government made current interpretations and labels of their data such as ‘flattening the curve’ or ‘second wave’, when our backlog in verification of COVID-19 cases has leapt to 6,000 as of May 22? DOH reported only more than 13,000 ‘confirmed’ cases (meaning those they verified/validated), but positive cases (those who tested positive) reached more than 19,000. The DOH explained the verification is tedious because of similar names and their lack of manpower.

Testing is too low at 0.19% only of the population tested more than three months since the first COVID-19 cases in the country. We have not counted the deaths of suspects and probable cases, that has shown to be at least twice as many as confirmed deaths.

In trying to explain Duque to the public, Roque said, “terminology lang ‘yan.” If it’s a small thing or an aside, then why do they make it so difficult for people to understand what’s really going on?

He said, as did many other government officials “cleaning up” on the “second wave” blunder that day, that this incident should not distract us from the fight against COVID-19. But then again, if that statement we often hear (and will surely be repeated in the future) is to believed, why have they not even started mass testing?