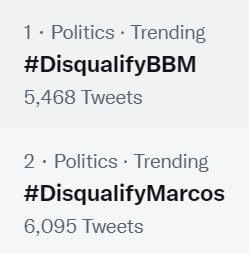 Several groups and individuals have mobilized online to call for the disqualification of Ferdinand “Bongbong” Marcos Jr. from the presidential race as the Comelec First Division opened its preliminary conference on his disqualification cases on Friday, January 7.

The cases are related to Marcos’ 1995 conviction for failing to file income tax returns (ITRs) and tax evasion during his tenure as a government official in Ilocos Norte. Marcos was initially convicted for both non-filing of ITRs and tax evasion. While the latter was reversed by the 1997 decision of the Court of Appeals (CA), the former was upheld, convicting Marcos for non-filing of ITRs.[1]

Under the Omnibus Election Code, Marcos’ conviction could permeate a crime of moral turpitude, a ground for perpetual disqualification from holding public office.[2]  In a similar manner, a mayoral candidate was disqualified[3]  by the COMELEC in Zamboanga in 2012 due to a pre-existing criminal conviction

The Campaign Against the Return of the Marcoses and Martial Law (CARMMA) reiterates its petition to disqualify Marcos from participating in the upcoming elections.

“The highest and most powerful position in the land must never again fall into the hands of a thief, liar, and convicted tax evader like Ferdinand Marcos Jr. We in the Campaign Against the Return of the Marcoses and Martial Law reiterate this stand in our petition: Marcos Jr. should be disqualified from running for president in the upcoming national elections,” said CARMMA in its official statement dated January 7.

“Today begins a long battle for integrity and justice as the Comelec’s First Division holds its preliminary conference on our petition as martial law survivors, as well on two other petitions filed by religious and youth leaders, seeking to disqualify Marcos Jr.” the group emphasized.

The martial law survivors’ group further stated that allowing Marcos to run for a national post will be a “mockery” not only to the sanctity of elections but also “to the nation’s history, democracy, and hardwon rights and freedom.”

The group also urged the Comelec to uphold truth, justice, and integrity all throughout the course of hearing Marcos’ disqualification cases.

‘An extension of Duterte’s tyrannical reign’

“On top of the late dictator’s tyranny and plunder that his son refuses to acknowledge, it’s a certainty that Marcos Jr. will continue the same brand of puppetry and fascism of Duterte,” said Pamalakaya.

They also urge the Comelec to “heed the petitioners’ clamor against the looming return of another Marcos to Malacanang.”

“…to frustrate his presidential ambition and Duterte’s de facto power extension is not only a political necessity, but moreover, it is in the highest interest of Filipinos who suffer from Duterte’s policies that starve and kill people.” the fishers’ group stated.

‘A disrespect for the election rules, laws’

Likewise, Gabriela Partylist and the Student Christian Movement of the Philippines (SCMP) amplified their calls to #DisqualifyMarcos through a social media rally.

In a tweet, the women’s national alliance has called Marcos’ presidential bid a “mockery” of the election rules. While the SCMP enumerated Marcos Jr.’s crimes during his father’s martial law.

Former Akbayan Partylist representative and professor Walden Bello also joined the online protest. Calling Marcos’ absence from the preliminary hearing as a sign of disrespect for the law.