Home CULTURE To struggle amid an unequal world: A review of Tudla Productions’ Barikada 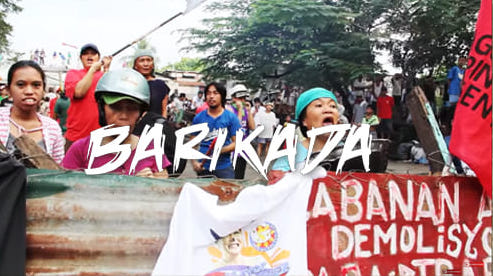 There is a lot of inequities in this world. This is because of the people who are only after their own interests. Just to get what they want, they don’t care about the people who will lose something just for their gain. The short film ‘Barikada’ produced by Tudla Productions is a film that best represents this kind of circumstances.

This film focuses on a woman named Cora, who fought against the demolition carried out by the government of Brgy. Corazon De Jesus in San Juan to protect their rights. They founded an organization named “SAMANA” containing most of the neighborhood who were eager to protect their houses. Despite the struggles they encountered and the pressure that the government brought into them, they were not shaken and even made a barricade along their streets to prevent the demolition from happening.

They were promised a relocation site that supposedly includes their basic necessities and establishments such as schools, markets and such but would definitely take them away from their means of livelihood. However, just to be eligible for this, they have to submit tons of documents and there are some restrictions as well.

This is just one example of how corrupt the government is. The scenes in the film are very well-played by the actors and actresses. The shooting location is also realistic and may attract the viewers’ attention to watch the film. The theme song associated with it is also one of the highlights as it is not just telling what the film is about but it gives a great impact if you are watching it with the theme song.

The movie does not only mirror inequalities in the country or a microcosm of it, but draws heavily from the demolition struggle of the residents of Brgy. Corazon de Jesus in San Juan City from 2010 to 2012, draws from real people and how they acted and decided amid the conflict they were faced. The short film is most likely a companion to the documentary ‘Pinaglabanan.’ The stories that the filmmakers were able to witness but were not able to document and show in the documentary most likely found their way in the narrative film ‘Barikada.’

On this day, it has been 10 years since the last demolition was attempted in the community. Because of the people’s resistance, the local politicians now know that it is not always that easy to get away with trampling the people’s rights.

It is not new to us how corrupt the government is. It is not just through this kind of situation, but in a lot of other circumstances. The film aims to show how resilient the residents of Brgy. Corazon de Jesus to protect their rights against the unfairness and greediness of the government. Sometimes, following legal guidelines won’t help solve these complications, especially for those people who aren’t really familiar with how the law works. They chose to use their strength and determination that is their only means of weapon to fight against their powerful enemy—their Mayor.

It is indeed disappointing that the ones who should be helping us to protect our rights, they’re the ones depriving us from it. Money and greed which are said to be the root of all evil seems to be real. Just to gain something, one is determined to go beyond even thinking of harming people’s lives. The film showed us that whoever it is that we are against, don’t be afraid to fight for what is right. Be it the Mayor or the highest officials, let us not be cowed. It is better to do something than just to sit back and watch the most important thing you cherish taken away from you.

The demolition struggle shown in the film proved crucial in local politics—it eventually led to the weakening of the political foothold of the dynasty in the city, where they lost in the 2019 elections for the first time in decades. They are still not able to make a comeback, as the new winners are now unchallenged in the coming elections. The new winners needed to address the issue of housing security and made promises in 2016—one that the residents of Brgy. Corazon de Jesus would surely hold them to account. Watching the film helps us realize that no matter what happens, the only person that can help you is yourself. The only person worthy of your trust is yourself. Be firm to fight for your rights and do not hesitate as long as you are on the right path.