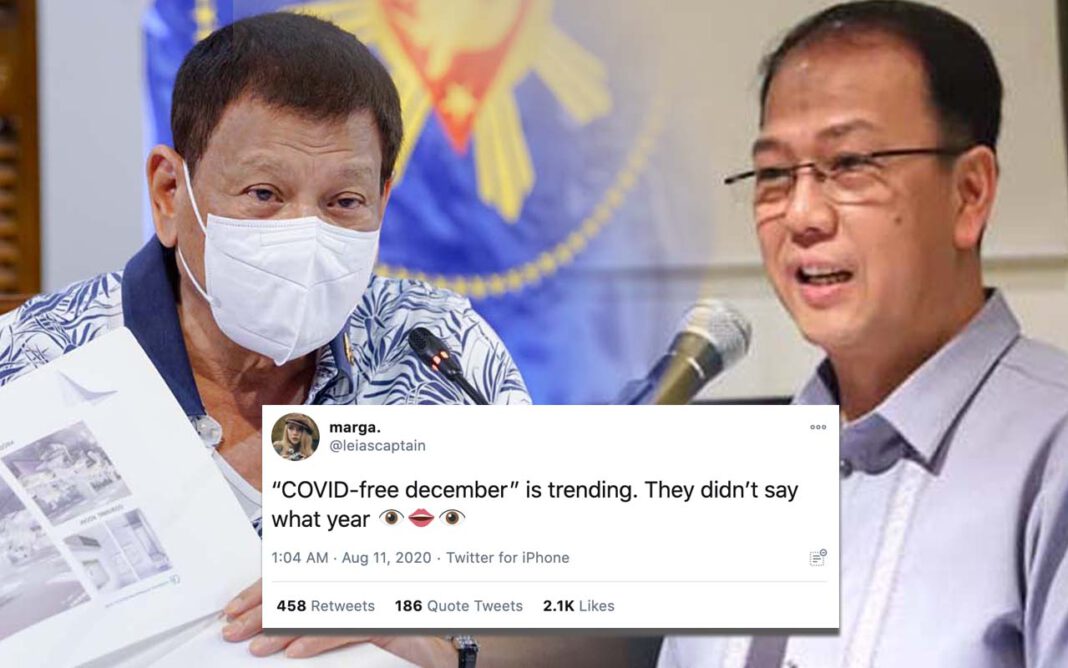 In August, President Rodrigo Duterte promised a “COVID-free December” and this even became a trending topic on Twitter, mostly containing tweets of optimism for lives to “go back to normal.” It was something people needed to hear, at a time a two-week lockdown or modified enhanced community quarantine was re-imposed on Metro Manila from August 4 to 18.

“Hintay na lang kayo. Kaunti na lang talaga [You just wait. Just a little bit more]. By December, sabi ko [I tell you] in the fullness of God’s time, hopefully we will have a COVID-free December and we can enjoy this Christmas season,” he said on August 10.

Among tweets, one netizen quipped, “They didn’t say what year.”

And that, now, has more or less become prophetic.

From a projection that the inoculation of COVID-19 vaccine will start in May 2021 and then by July, newly-appointed vaccine czar Carlito Galvez, Jr. said that the main bulk of the vaccine will realistically arrive by end of 2021. The government’s initial plan is to procure vaccine for 20 million Filipinos.

On November 5, Galvez said the timeline of the government is to start inoculation in the country by May 2021.

“Ang prediction po ng DOST [Department of Science and Technology] if everything will go well, ang mangyayari po earliest is May,” he said in an interview with ABS-CBN News Channel on November 5.

But he said that if there will be issues supply and demand, the rollout of the vaccine may be moved to the end of 2021.

On November 7, Galvez said the best case scenario for the vaccine rollout is from May to July 2021.

“Tinitingnan natin kung magkakaroon tayo ng [We’ll see if we’ll have a] best-case scenario. By May or July we will have the vaccine rollout in the Philippines,” Galvez was quoted on the sidelines of the National Capital Region Police Office’s graduation ceremony.

[Our best case scenario is by May or July 2021, there is a vaccine available through COVAX and our bilateral arrangement. But realistically speaking, the main bulk of the vaccine will arrive maybe by end of 2021 or by 2022… that is what we are seeing now because there is limited supply because the rich countries have procured most of the production.]

The COVAX Facility is a global collaboration to accelerate the development, production, and equitable access to COVID-19 tests, treatments, and vaccines. The goal of COVAX is by the end of 2021 to deliver two billion doses of safe, effective vaccines that have passed regulatory approval and/or World Health Organization prequalification.

Priorities for free COVID-19 vaccine
The government’s initial plan is to procure vaccines for 20 million Filipinos. The Philippines has a population of 100.98 million in the 2015 Census. The Census takes place every five years and has already started this year, getting delayed a bit due to the pandemic. The World Bank estimates the population in the country at 106.7 million as of 2018.

In a public address on October 14, Duterte said he wanted all Filipinos to get the vaccine, but government has yet to find the money.

“I have the money already for the vaccine but hahanap pa ako ng maraming pera because you know there are now 113 million Filipinos…And to me, ideally, all should have the vaccine without exception,” said Duterte.

Duterte said the first to get the vaccine are the poorest Filipinos in the government’s cash dole-out program Pantawid ng Pamilyang Pilipino Program or 4Ps and the soldiers and security forces, not being able to mention health workers.

In the Malacañang Palace briefing the next day, Presidential Spokesperson Harry Roque reiterated that those in the 4Ps will be first to be given the free COVID-19 vaccine, along with police and military and adding frontliners. Roque noted some may have to pay for the vaccine, especially those who can afford to pay for it.

Roque added that the budget for the 40 doses of vaccines at USD10 each for 20 million individuals, which is roughly at P2 billion.

On November 6, the Department of Health (DOH) said those who will be prioritized for the free COVID-19 vaccine from the government include:

DOH USec. Ma. Rosario Vergeire said these are according to pronouncements of Duterte and Galvez.

The P4.5 trillion proposed 2021 national budget has hurdled the Lower House of Congress and has moved on to the Senate. The House allotted P2.5 billion for COVID-19 vaccine.

Vaccine czar duties
The Inter-Agency Task Force on Emerging Infectious Diseases (IATF) resolution on October 29 ordered the creation of a COVID-19 vaccine task force designating the DOH as chair and ordered the DOH to convene the group immediately.

However, only one week after, the IATF abolished the COVID-19 Immunization Program Management Organizational Structure to be headed by DOH and Duterte appointed Galvez as vaccine czar on November 2, in between the two meetings and two resolutions of the IATF.

The IATF Resolution No. 83 released on November 5 enumerated the extensive tasks of the vaccine czar, as follows:

In a briefing, Vergeire said there will be no changes in the agency’s vaccine procurement processes, but that Galvez may add expeditious processes to make their work easier.

Vergeire also said Galvez, who has no public health or medical background, would not work alone and that a “whole-of-nation” and “whole-of-society” approach will be implemented.

Galvez is a retired army general who spent most of his career in Minadanao and was appointed by Duterte as Armed Forces of the Philippines Chief-of-Staff from April to December 2018. Upon his retirement, Duterte appointed him as Presidential Adviser on the Peace Process, replacing Jesus Dureza. Duterte then appointed him as National Task Force COVID-19 Chief Implementer in April who first took on and promised mass testing until a testing czar was appointed, falling short of testing capacity targets several times, until the government instead scaled its COVID-19 testing to what it calls expanded testing.

In a Malacañang Palace briefing on  November 3, Galvez said his appointment sought to unburden the DOH and the DOST from administrative work. He added that DOH Sec. Francisco Duque III is still primary person in charge of overseeing vaccine implementation, with the DOH Sec. being head of IATF that rolls out government COVID-19 response policies. These policies from Duque and the IATF, he said, will be implemented by him.

Galvez said he would use his being a military chief for coordination with the military and police for the use of their camps and warehouses for storage and distribution of the vaccine, where Duterte said before they would be stored and the military in charge of distribution.

IATF Resolution No. 3 also provided general principles to be adopted in relation to the DOH Omnibus Interim Guidelines On Prevention, Detection, Isolation, Treatment, and Rehabilitation Strategies for COVID-19, a memo on temporary suspension of securing license for COVID-19 testing labs using GeneExpert Technique until there is a steady supply of the cartridges used and will only continue to process applications for GeneXpert in regions with RT-PCR. The IATF resolution recommended as principle “using the right test for the right reason.”