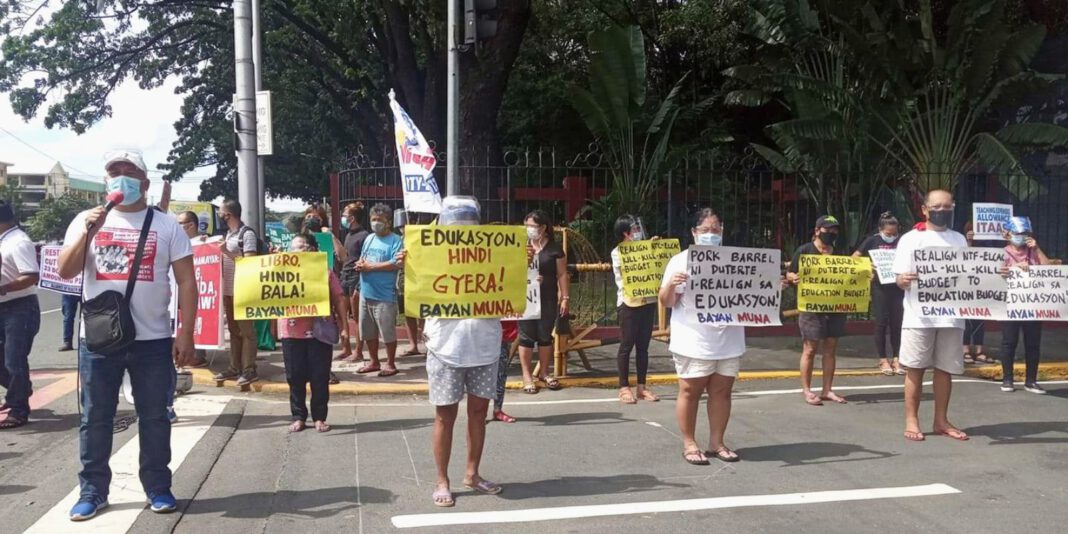 Various progressive groups trooped to the House of Representatives on October 16, the scheduled last day of deliberations for the 2021 national budget, protesting it as a “Kill, kill, kill” budget and not a pandemic response budget.

Aside from the budget being channeled to the administration’s anti-terrorism campaign given the release of the implementing rules and regulations of the controversial and much-protested ‘terror law’ with 37 petitions challenging it in the Supreme Court, groups assailed the 2021 national budget as “election budget” for those in control of it.

The bill breezed through second and third readings on the same day, as it did last year.

In the plenary, House Deputy Minority Leader Carlos Zarate of Bayan Muna partylist flagged the P4.5 trillion proposed 2021 national budget bill for allowing the President to realign savings to augment intelligence funds of departments, including the president’s own, the Office of the President.

Zarate said the provision under Section 74 of the budget bill usurps Congress’ power of the purse.

Bayan Muna partylist Representative Ferdinand Gaite said the budget is not a budget for the people and not a pandemic response budget, but a budget to fund continued militarization and fascism and to benefit a few through corruption.

Gaite assailed that P509 billion is allotted to Defense at Public Order and Safety, allocated to the Department of National Defense (DND) and Department of Interior and Local Government (DILG). He also highlighted the P19.1 billion budget of the National Task Force to End Local Communist Armed Conflict (NTF-ELCAC). Meanwhile, the Department of Social Worker and Development (DSWD) got only 171.2 billion and the Department of Health (DOH), P203.1 billion, including the P2.5 billion for Covid-19 vaccine procurement.

Gabriela Rep. Arlene Brosas criticized the spending plan is full of anomalies and pork insertions she called “multiple infra-pork slices” which she said amounts to P397 billion, bigger than the spending plan of the health department amid the Covid-19 pandemic and that there are no funds allocated to build hospitals and health facilities.

ACT Teachers Partylist Rep. France Castro lamented that there is no substantial increase in the budget of the Department of Education (DepEd) and is instead filled with budget cuts.

Castro also criticized the low allocation for production of modules, and absence of funding for internet and gadgets of teachers and students for distance learning.

Many teachers lamented having not received any assistance from the DepEd given the shift to distance learning leading to the opening of classes on October 5, spending their own money on printing, delivering modules, internet and gagdets for online classes as even the modular modality of learning requires online classes or interactions between teachers and students and their parents.

Kabataan Partylist Rep. Sarah Elago said the allocation for COVID-19 pandemic response, even for health in general, is way below internationally accepted and agreed standards.

The House of Representatives voted 257 yes, 6 no and no one abstained to approve on third and final reading the proposed P4.5 trillion national budget for 2021.

The Makabayan bloc voted ‘no’ to the proposed budget.

Newly-minted House Speaker Lord Allan Velasco said the 2021 national budget is “truly reflective and responsive to the needs of our people.”

“We have provided every representative the opportunity to raise issues, clarify any misconceptions, and recommend how we can make the budget truly responsive to our current and pressing needs and conditions,” he said.

The agencies that received the biggest allocations:

The Lower House plans to transmit their version of the budget to the Senate on October 28.