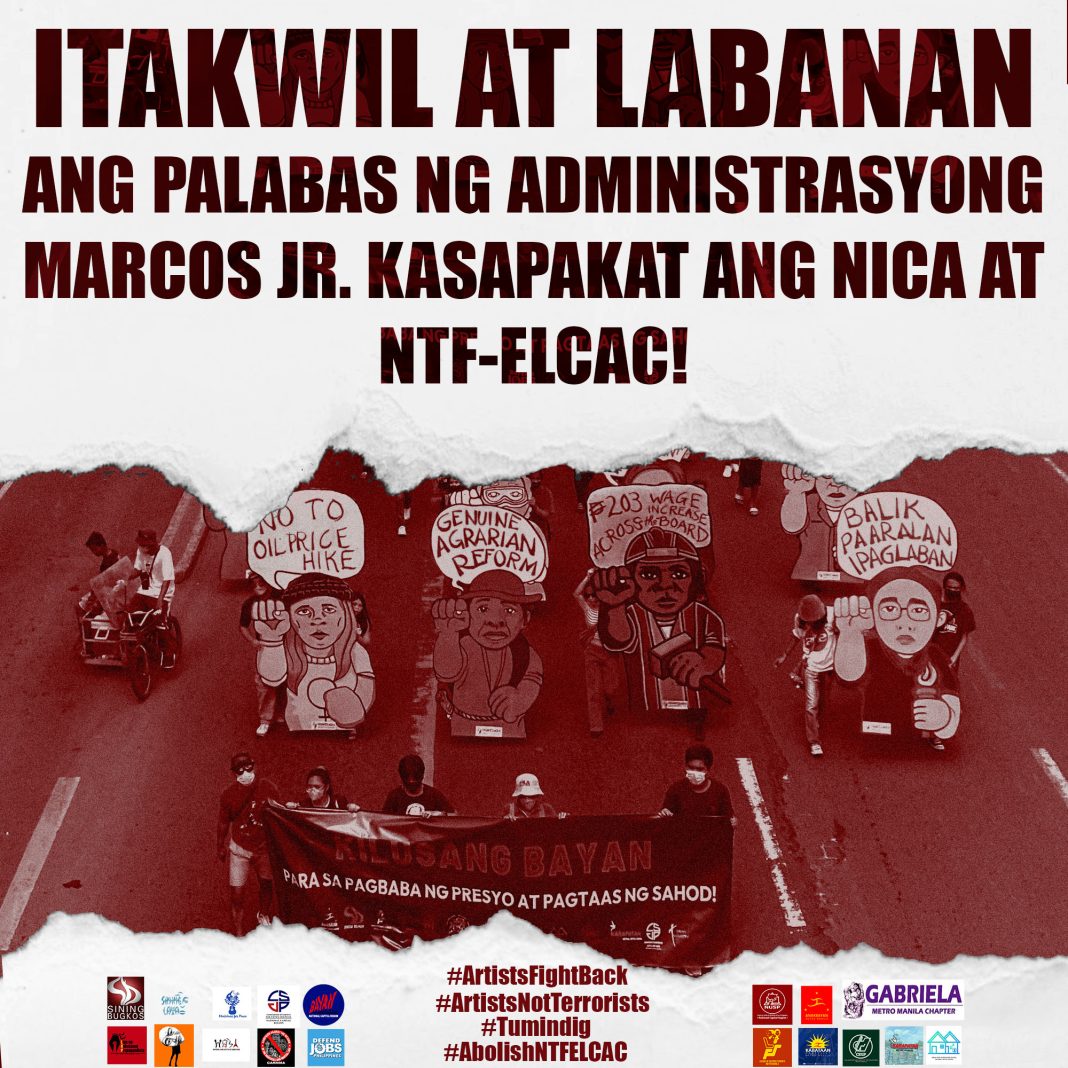 Such a program is intending to consolidate artists, directors, filmmakers, and other cultural workers to primarily uphold counter-insurgency efforts against progressive individuals and organizations, which are no longer new in NTF-ELCAC’s brand.

In a Facebook post last August 24, NTF-ELCAC and NICA has already blasted releases and invitation for art, entertainment, and culture industry involvement. It also included an invitation by the National Security Council (NSC) for an upcoming symposium set on September 7.

NSC is a collegial body supervised by the Marcos Jr. administration with its supporting members from cabinet, congress, and other government officials.

Sining Bugkos slammed Marcos Jr. which has only been promoting red scare antics akin to his ousted father Ferdinand Marcos Sr. who enacted the Martial Law in 1972. It was considered to be the gruesome era in Philippine history following exorbitant human rights violations, severe economic pains, foreign power control among others.

[As for the debt of the Marcos family: blood, wealth, and independence were deliberately stolen and extorted that they must pay]

The cultural alliance group stressed that the current administration will make use of its political powers to upheave manipulation and conditioning among the people through the use of mass media, arts and culture industry.

[The current regime will surely continue to manipulate and condition the dissemination of programs, shows, and music as it did to rig the election results this year]

It was reported that the ousted dictator’s son Marcos Jr. proclaimed the Philippine president with a casting of 31 million votes. The number was so high, even surpassing the 16 million votes got by his close ally and predecessor Rodrigo Duterte, that many critics suspected it of electoral fraud.

[The Marcos Jr. administration really wants a show. where he will make the people blind and blind]

The group noted how the Marcos Jr. administration ultimately neglected to address current socio-economic situations including the ballooning rate of inflation, high prices in oil products, food, and other basic commodities.

They stressed that the administration would even surpass the grim records of his ousted father and his predecessor, Rodrigo Duterte.

[In fact, there was no control on the ballooning inflation that hit 6% this July 2022 before Marcos Jr. seemed naïve in the serious state of the country’s economy]

Sining Bugkos also condemned the continuing suppression of academic freedom not only evident in the red-tagging among progressive student youth but also in the banning of progressive books and authors.

At least 17 books were ordered to halt publication and pull out from school libraries by the Komisyon sa Wikang Filipino due to the incident.

According to NEP, NCCA was only approved for P25.163 million, it was the biggest cut from the agency’s actual proposal of 156.283 million or an equivalent of 83.90% decrease.

[Instead of promoting distortion and wanton red tagging, the P10 billion fund should really serve for the welfare of the people, with which the impoverished due to the health crisis and the socio-economic response are the ones in need of financial aid the most]

The old version HRVRRA has provided P10 billion for reparation as retrieved from the ill-gotten wealth of the Marcoses thru Swiss bank accounts.

[Like his father, the new Marcos Jr. will never win. Rather, there is no doubt that the raging spirit of the country’s artists along with the broad masses will continue to educate, mobilize, and organize to promote the nationalistic, scientific and mass-based culture]

Read their full statement thru bit.ly/ItakwilANB.