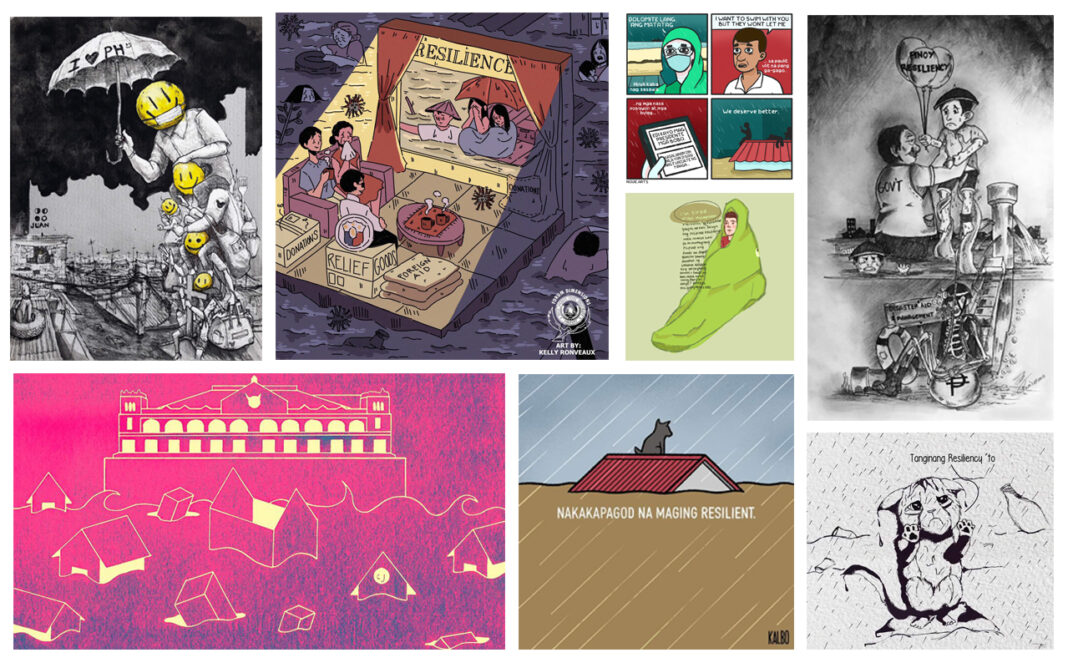 ‘Filipino resiliency’ is a concept we have known probably for as long as the Philippines has been in the Pacific Ring of Fire or typhoon belt, a large Pacific Ocean region where many of Earth’s volcanic eruptions and earthquakes occur. This fact is not not make another excuse for government accountability during disasters – it would be most unwise to use this as justification at any time, especially in modern times, as it would just expose the lack of disaster preparedness. But our location on the planet and the response (or lack thereof) of various administrations to calamities which we already know we should expect have turned these natural calamities and disasters to man-made ones and have contributed to the Filipino people’s enduring poverty, life insecurity and/or misery.

The virtue of ‘Filipino resiliency’ has been used time and again by politicians and also by ordinary citizens alike. In media and culture, it is also usually used by big broadcast media networks in news or documentaries, usually with participatory or observational modes – to champion this seeming doggedness of Filipinos to survive, to fight for life. And maybe, that is optimistic.

But it gets too romanticized and cringe-y when we hear lines like “nakakangiti pa rin sa gitna ng mahirap na sitwasyon” (able to smile in the face of adversity) usually to recap or conclude sometimes well-drawn out stories on people’s toils, be it their dispositions in life (eg a poor farmer) or a challenging situation they encountered. The famous cheesy line would then be applied to particular situations, for example a family survived a disaster “nakakangiti pa rin sa gitna ng sakuna” (able to smile amid the disaster). A person who faced immense quandary, maybe loss of jobs and some family health problems along with their house being demolished all at the same time or even just one of those, and we hear “nakakatawa pa rin sa gitna ng problema” (able to laugh in the face of problems). A family who lives in hand to mouth existence who “nakakangiti pa rin kahit wala nang makain” (able to smile despite having no food to eat)– in this case, too much injection of optimism becomes too subjective, if not physically or practically impossible. To smile despite having nothing to eat? That’s a feat. Maybe they are only smiling for the camera as people are wont to do. But the idea of “Filipino resiliency” has somehow been inculcated in our minds, ingrained in our culture, as we are wont to echo this, especially if we are not among those affected.

Four successive strong and destructive typhoons, the constant absence of the president in disaster briefings, and disaster briefings being held hours after landfall (in the case of typhoon Rolly) or as the typhoon exited the country (in the case of Ulysses) have washed bare this idea of Filipino resiliency as people call not only for government accountability, but to stop romanticizing or glorifying resiliency for so many reasons: Government evades accountability with the ‘Filipino resiliency’ card. Filipino resiliency actually meant the people survived on their own, with little or no help from the national government. Filipinos were pushed to be resilient because they are fighting for their lives. Resiliency is for those who are economically able. This discussion is long overdue.

And if artworks are being created, along with the discussion on this issue, the push for more government accountability and for societal changes so we may not have to live a lifetime tapping on our resiliency, then this is what Filipinos can truly be optimistic about.