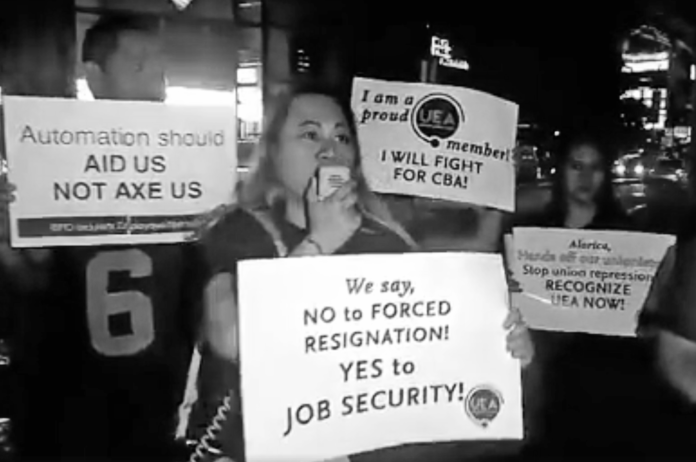 (UPDATED) The BPO Industry Employees Network (BIEN) lighted candles on Christmas Day in front of Export Bank in Makati to mourn the death 37 employees who died in the NCCC mall fire in Davao City on December 23.

Survey Sampling International (SSI), located at the 4th floor of the mall, confirmed in a statement that all 37 were their business process outsourcing (BPO) employees.

“It is with deep sadness that we confirm that 37 Research Now SSI employees were lost in the fire that struck the NCCC mall in Davao City, Philippines, where the company employs 500 in its local call center operation,” the company said.

SSI also said they arranged for counseling for its employees and would help to support funeral arrangements and  create a fund for contributions to provide further assistance to the families of the 37.

BPO employees from Unified Employees of Alorica and BIEN based in Metro Manila registered their demand for immediate, independent and thorough investigation of the fire that led to the death of 37 before Christmas. The groups also demanded justice for the victims and accountability for the tragedy.

BIEN said initial information from concerned individuals revealed that there appears to be violations of safety standards that caused the entrapment of the victims in the establishment’s third floor.

BIEN, in an earlier statement, said the incident should compel government to look into every BPO company’s compliance with occupational health and safety standards and also to safeguard BPO employees’ rights so that such incidents may be prevented.

Davao City Vice Mayor Paolo Duterte, meanwhile, offered his condolences to victims of the NCCC fire and the onslaught of Typhoon Vinta and announced his resignation today for reasons of ‘delicadeza’ in this time that he said he ‘need to protect my honor and that of my children.’

Unified Employees of Alorica (UEA) also aired out their demands for job security and end to union repression and union busting.

One worker assailed the situations of sharing of headset and diminution of salary inside the company. The allowances employees signed was for P 3,500 but they said they only received P2,900.

UEA president Sarah Prestoza said their company is still denying that they are the employer of the BPO workers.

The workers hoped that the collective bargaining agreement with the company management will push through this year where the employees would table their demand for ‘salary increase, not dimunition’ and ‘retirement fee, not termination.’

They lamented that as regular employees, they do not receive what Filipino workers and employees should receive under Philippine laws even if they are working for a company based in the United States.