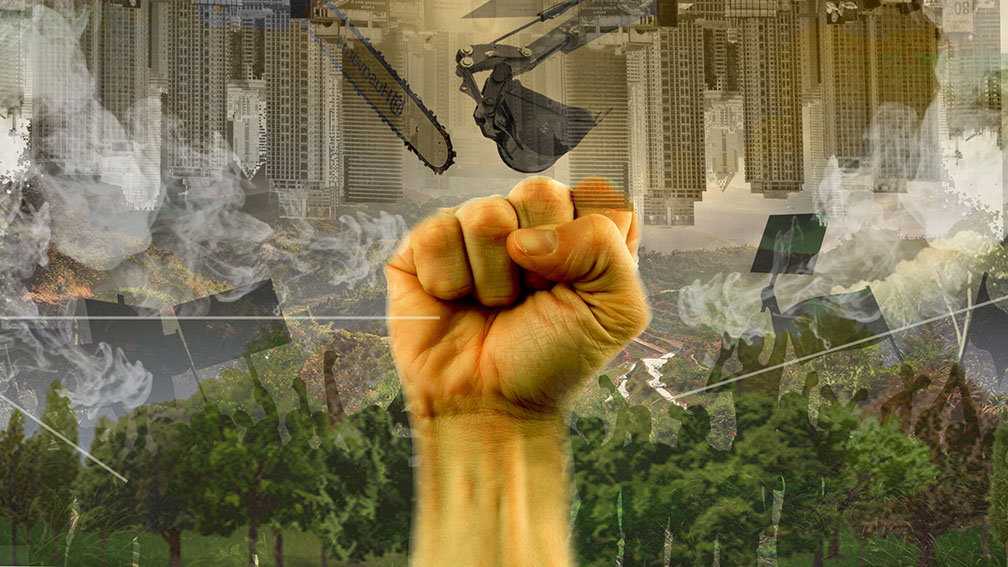 We are told that in order to appreciate nature and protect the environment, we have to go somewhere and participate in an outreach activity. It is there in the rural where we could restore forests, watersheds, and waterways. But here in the urban, we are merely incentivized to reduce carbon footprints, plant trees, and lead an eco-friendly lifestyle: buy eco-bags and manage waste efficiently.

The focus of the latter is the self since the collective burden of enhancing sustainability is outsourced to individuals. If the air is dirty or the water is polluted, then it is the responsibility of individuals to rethink and change their everyday habits. They can compensate their guilt by volunteering in a CSR-sponsored activity either in the suburbs or some popular tourism destination.

What is lost in this narrative is assigning accountability to policymakers who often conspire with big business in legitimizing the wanton plunder of our finite resources.

Indeed, citizens have a crucial role in cleaning our habitats; but it is the government which has the mandate and capability to mobilize an entire bureaucracy in order to ensure the rational usage of the commons. Government can regulate the activities of the extractive industry. State agencies can promote environment awareness through schools, media, and other opinion-making institutions.

Through innovative land use planning, policymakers can redraw the boundaries to promote social cohesion and ecological balance. Concretely, in the urban, it means making cities more livable, stimulating inclusive development, and building zones that uplift the living conditions of all.

But instead of fulfilling their duties, politicians betray their constituents by uncritically endorsing the worldview and business needs of their campaign donors. This includes dignifying the corporate spin about the supposed harm in society if public assets are not immediately handed over to the private sector.

Because of this, open spaces are targeted for commercial use, idled lands are converted into shopping enclaves, public properties are devalued and sold to private developers. Least priority is given to the building of parks and mass housing.

What narrow-minded and money-hungry politicians aspire to create is another pathetic replica of the First World. Then and now, the unquestioned indicator of progress in the urban is the skyscraper. A city is said to be booming if it has an expanding skyline dotted with towers, high-rise, and iconic buildings. Urban development is equated with malls, commercial centers, and flyovers.

Hence, the unlamented rapid privatization of public spaces; the corporatization of urban planning; and the distortion of the concept of ‘green city’. Thanks to corrupt and inept bureaucrats, urban planning is now largely assumed by corporate technocrats who buy, design, and build city blocks to maximize profit.

Meanwhile, the coercive arm of the state is deployed to clear the land, evict residents, and persuade the public that these measures are needed for the benefit of the greater good, including the protection of the environment and strengthening the climate-readiness of communities.

Believing that a democratic alternative is better compared to the business-driven greening initiative, Nilad environment network has launched the ‘green corridor’ campaign to promote the preservation and expansion of green spaces in the country’s premier urban hub.

It is touted as the people’s response to the ascendancy of the corporate sector in reshaping the cityscape with regard to enhancing the region’s green characteristics. This necessitates the formation of a broad movement composed of concerned citizens, environmentalists, activists, and civic groups which can counter the nefarious money-powered elite consensus.

Nilad’s campaign demands an inventory of green spaces, the expansion of the coastal green belt, and the enumeration of threatened wildlife habitats in Metro Manila. This can be used as reference in publishing a green map, the identification of small and large parks, and the tracing of bike lanes.

The political advocacy also involves local and national legislative lobbying. Laws need to be updated such as clarifying what it means to have an open space, green space, and green urban space.

Through local ordinances, we can determine the state of parks. Are parks expanding? Are they open to the general public? Policymakers have to understand that parks are more than just decorations or an optional feature of urban planning that can raise the land value of an open space. Green parks are actually essential to improving the overall health of individuals in a modernizing society. More importantly, parks boost democracy by facilitating the interaction of citizens from all walks of life. Today, as private developers gain tighter control over a rising number of parks and open spaces in the urban, the opportunity to exercise dissent and political action in public areas is getting more restricted.

Also needed is a comprehensive inventory of trees in Metro Manila. Some cities such as San Juan are mobilizing volunteers in order to count and specify the number of trees in every barangay. But the absence of a region-wide inventory of trees and a systematic accounting of tree planting programs make it easy for PPP contractors to cut trees and reduce the size of parks without generating public backlash.

On the part of Nilad, it will crowdsource the monitoring of parks and even the tagging of trees through social media. Decentralized greenwalks will be organized to evaluate the accessibility and maintenance of parks.

‘Green corridor’ is inevitably a political movement that will directly engage legislators, policymakers, and urban planners. It seeks to intervene in the ongoing conversation dominated by big business perspectives about the planning of the future of cities. It is an education campaign that aims to raise public consciousness and vigilance about some large-scale projects like the Manila Bay reclamation that threaten to destroy the biodiversity in the region. Finally, it upholds the principle that the people themselves are ready to decide and design the way we live and how we ought to live instead of simply delegating these issues to so-called experts and tycoons. Simply put, in greening the city, we envision a space where both rich and poor can inhabit in order to do business, create art, make love, enjoy nature, and practice politics.