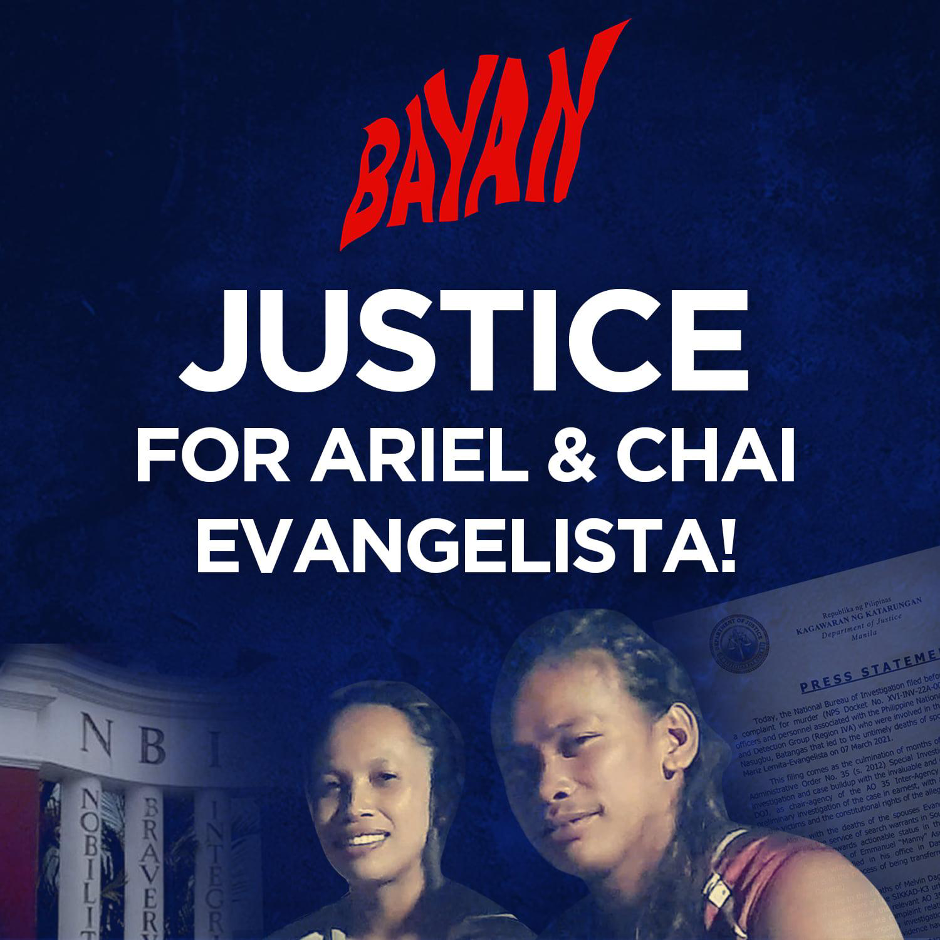 Bagong Alyansang Makabayan (BAYAN) expressed their support on the murder complaints filed by the National Bureau of Investigation (NBI) against 17 individuals who took part in the raid that led to the killings of environmental activists Ariel and Chai Evangelista.

In a statement, BAYAN lamented the deaths of the Evangelista couple, along with seven others, who were murdered in what is known as the “Bloody Sunday” killings of activists in Calabarzon on March 7 last year. The Evangelista couple were survived by their 10-year-old son who was also present at the time of their killings.

“The killings of the Evangelista couple, in the presence of their child who only managed to hide, was such a heinous crime,” BAYAN stated.

“The filing of this latest criminal complaint should serve as a warning to law enforcers who will allow themselves to be used for extrajudicial killings and the weaponization of search warrants. There will be a time of reckoning,” the group asserted.

These were the second and third murder cases against the individuals involved in the Bloody Sunday massacre. The first was filed in December last year against the personnel involved in the death of BAYAN Cavite coordinator Emmanuel “Manny” Asuncion.

‘Not an isolated case’

“The killings in Batangas and Cavite were not isolated cases. They were part of a region-wide operation that targeted unarmed activists,” said BAYAN.

Along with the two Evangelista, seven others were also killed while six were arrested during the raid.

Among those killed are the following:

BAYAN expressed their hopes for the filing of murder complaints against the people involved in the killings of other Bloody Sunday victims.

They also urge the authorities to expose the “real masterminds” behind the killings, along with the executives and judges responsible for the issuance of the search warrants used for the raids.