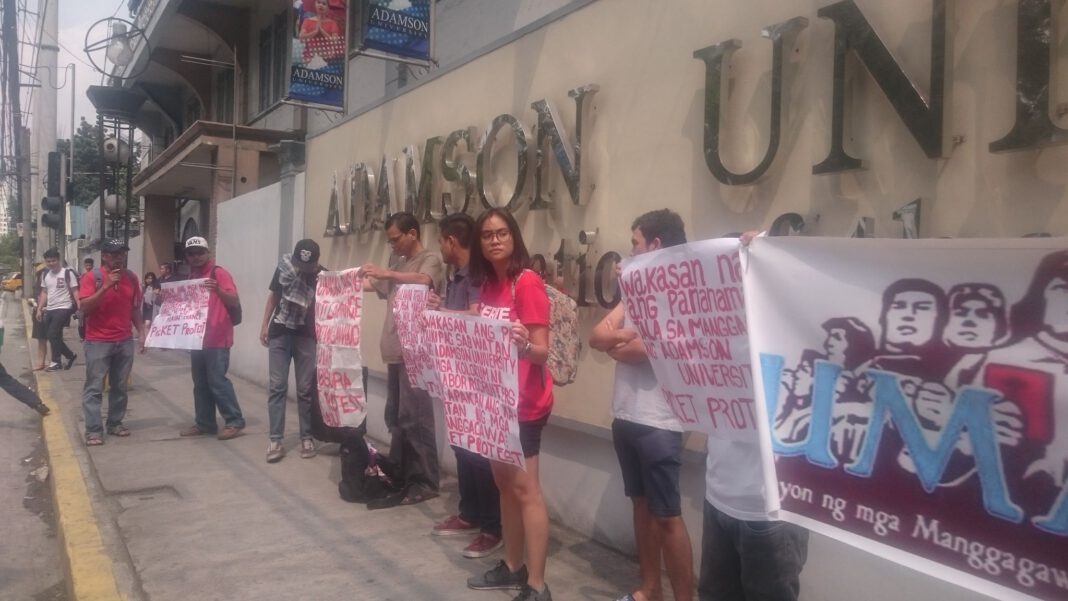 “We find it unfair that we pay our dues properly but our school administration does not do the same for its workers,” said Joshua Reggio Bustamante, a student of Adamson University (AdU) and a member of Anakbayan.

AdU students expressed their support to dismissed workers of their school still entangled in a labor battle with the school administration. They have recently spearheaded the signing of a manifesto of unity between the workers and students. They led a signature campaign among the students, professors and instructors, and other staff of AdU, asking to end the unjust employment conditions in the school.

He said that the way AdU administration handled the employees is contradictory to the institution’s “education with a heart” and “service for the poor.”

“Work is tantamout to life. If you remove a worker from a job, it is almost you are depriving them of the right to live because the workers will lose the means to eat and provide the basic necessities,” said Bustamante.

AdU terminated 12 workers from Facility Maintenance under the Physical Facility and General Service Office on January 15 and only informed them the day before to no longer report for work.

Students supporting the dismissed workers is asking the school administration to give back to the workers their jobs and end labor contractualization in the school.

Bustamante lamented that he and his fellow students will become workers and employees themselves and hoped that they would not have to become contractual workers, especially given the promise of President Rodrigo Duterte to end contractualization this year.

Workers from the Unyon ng mga Manggagawa ng Adamson Univerity (UMAdU) sued the AdU administration after it terminated 12 workers from their jobs in the university “without clear and just reasons.”

“We worked until the 14th of January. We did not have any idea that we will be terminated. Our supervisor informed us that on the following day, on the 15th, we are already discharged from work,” he relayed.

Abalos is a father of four, two of them are already studying.

He related that the letter of discharge for the 12 terminated laborers was submitted to AdU’s Human Resource Development and Management Office (HRDMO) on January 10, and the employees listed did not have knowledge about it.

“In law, there must be a 30-day notice before they remove us from our jobs, and for us to at least know why we got terminated,” Abalos added.

According to Abalos, the AdU administration already expressed its plan of discharging workers on November 2016, saying that electricians will be the first ones to be dismissed. This motivated the utility and maintenance workers of Adamson to create the UMAdU.

On January 11, the union was officially recognized by Department of Labor and Employment (DOLE) as a “legitimate labor organization.”

Abalos believed that the creation and recognition of their union is the underlying reason for their termination. He reasoned that, under normal circumstances, it is unlikely for them to be removed since they are in the middle of the school year with still lots of work to do. That the union’s officers including Abalos himself and their president Israel Fababier were included on the list of the dismissed workers also pushed Abalos to believe that the school administration is trying to weaken or break up the union.

Abalos said that their fight is not only for their families, but also for other workers and future workers to not have to suffer what they have had to suffer.

The AdU administration snobbed the first hearing on the cases of union busting, illegal dismissal and unfair labor practices saying that they did not receive the letter from the union. Abalos said that that is hard for him to believe because they delivered the letter directly to the office of Fr. Marcelo V. Manimtim, C.M., president of Adamson University.

Only on the second hearing of the case in February 1, 2017, when DOLE asked AdU administration to attend the hearing, did they come. The lawyers that represented the AdU said that workers do not know the labor code so they refused to talk to the the members of UMAdU, and asked for the union’s attorney. But the union maintained that they have sufficient knowledge about their rights and the law.

Photos by Agatha Rabino of The Manila Collegian and UMAdU Caritha FB Page.