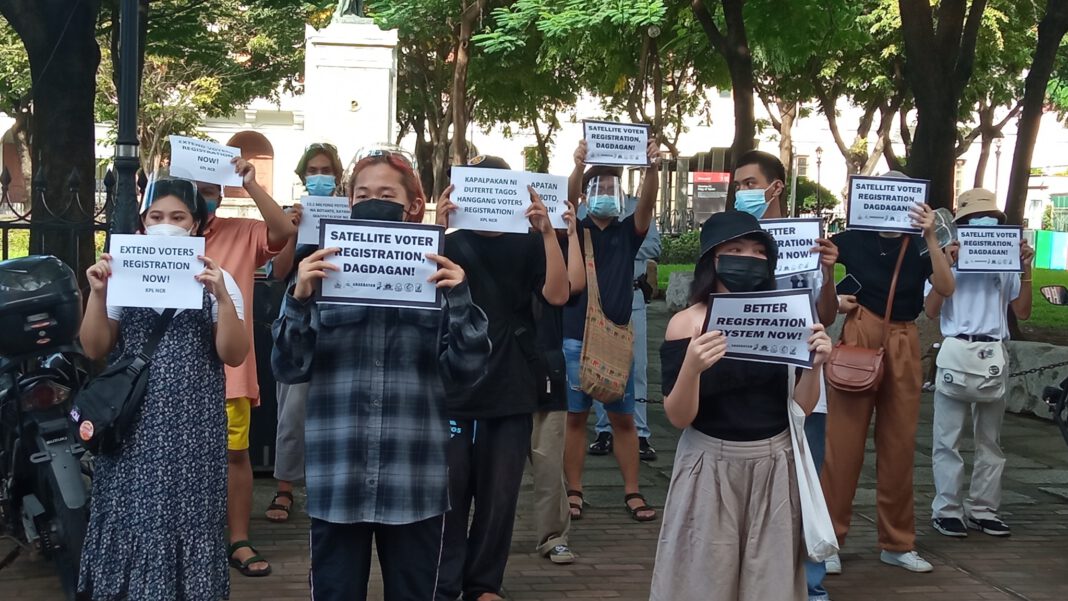 Kabataan Partylist (KPL) National Capital Region (NCR) joined by other youth formations trooped to the Commission on Elections office in Intramuros, Manila to demand ‘comprehensive, accessible, and efficient’ mechanisms to ease the registration process for millions of potential voters now that the poll body has granted the public call for voters’ registration extension.

During the extension period, the voters’ registration will only be on weekdays from 8 am to 5 pm, and on October 30, which is a Saturday.

The registration for overseas voters was also extended from October 1 to 14.

Tinaya said that the one-month extension would only be substantial should these issues that the people face upon registration be addressed by COMELEC.

On June 15, the poll body introduced a Mobile Registration Form App. However, the group said the use and access of had very restrictive and limited means.

The COMELEC identified pilot areas with poor internet connection which will be prioritized and accommodated to utilize the app by encouraging users to visit their local COMELEC offices to ask for a copy of the app. This will then be sent either via Bluetooth or via SHAREit.

While users need not have an internet connection, they were asked to fill out the form for a QR code which has to be presented to the local COMELEC office. Tinaya decried that even with the use of the app, needing the physical presence of the voter meant the registration process was only partly digitized but was even more complicated especially for the poor.

[If the COMELEC’s process for accommodating voters remains the same, the one-month extension will prove insufficient to register 13.1 million more potential voters.]

Last September 11, COMELEC Spokesperson James Jimenez said that the poll body has been processing over 25,000 registrants on a daily basis.

KPL NCR said that with that number, only 575,000 or 4.39% out of the 13.1 million remaining potential voters could be registered despite the approved extension of registration, or maybe even less if registration issues remain unsolved.

The COMELEC said over 63.36 million Filipinos may vote in the May 2022 elections as of September 11, with over five million new registrants.

Since June 2021, the poll body said they will increase the number of registration centers. COMELEC Deputy Executive Director for Operations Teopisto Elnas Jr. said that there were only 18,945 satellite registration offices or at least 35.75% against the 52,842 sites established last 2019 midterm elections because of pandemic restrictions.

Two voters interviewed by Manila Today who lined up at 3 am in a mall in Manila expressed dismay at the congestion, long queues, and pre-dawn cut-offs. Only one of them was allowed to register as a voter that they said depended on the IDs and other requirements they presented.

Both shared they tried four times but were met with cut-offs at around 3 to 4 am, prompting them to line up before 3 am on the day Manila Today interviewed them.

[The system is not organized, especially in the queue. They don’t have a number system for those who lined up and they accommodate only 300 despite more than a thousand who were on the queue.]

Another queue awaits the applicant selected among the 300 in the actual registration inside the mall.

[After that, you will go to the mall to wait for the actual registration. There were only 10 who assist in the registration that’s why the process is slow.]

It took almost a whole day to finish the registration.

[Our countrymen should not be disenfranchised and not be able to vote because of logistical constraints that are possible to be addressed by the government.]

Manuel urged COMELEC to not limit its goal despite reaching the target number of voters for the May 2022 elections.

[Don’t be satisfied with reaching the target of new voters, but as many as possible should be accommodated because elections are part of our democratic exercise and maximum participation should be the goal.]