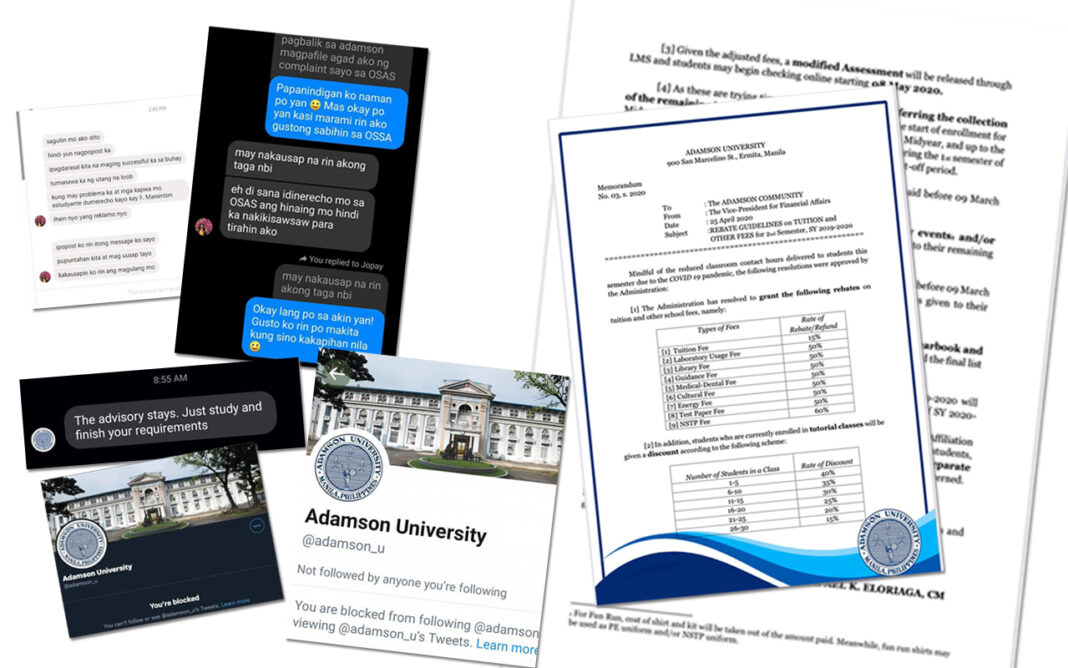 Organizations from Adamson University have been receiving reports from students that they were blocked by the university’s Twitter and Facebook accounts after relaying their concerns via the school’s social media platforms. Comments from their Facebook page were also deleted when they posted their sentiments about the refund on tuition, continuation of online activities and other requirements the students need to comply.

Students expressed disagreement about the university’s refund and rebate scheme at the face of the pandemic and the cancellation of physical classes and posted their opinions on their personal accounts and commenting on the said post. The following day, the campus answered these by blocking and restricting the students from commenting.

The university’s Vice President for Financial Affairs announced on April 27 the scheme for refunds, rebates or discounts for undergraduate students that the university will follow. Students will get 15% refund or rebate on tuition, 50% on other fees, and 60% on NSTP fee. Students in tutorial classes will get 15 to 40% discount; the bigger the class, the smaller the rate.

The students protested that the refund or rebate rate the school is offering is “too low” and “unfair.” Students also questioned why payment of remaining balance is only deferred until the next term the students enroll, but not waived despite classes only being held in the school facilities for six weeks.

There are also no guidelines on the refund or rebate for Senior High School students yet, and the university replied that they will make a separate announcement for that. Graduate students also asked whether they will receive refunds or rebates.

This and others were among several reactions from students to one of the replies from the university’s social media account, such as: “The advisory stays. Just study and finish your requirements.”

Students also took to the reviews section of the university’s Facebook page with one review saying “Lacks compassion, instead of listening to the complaints and concerns of the students, they block them instead to maintain its good publicity. They treat education as if it is some kind of business. They don’t even allow students to take exams if they cannot settle their payables on time.”

Another recent review said “Lacks compassion towards students. Negative comments are not welcomed. They would choose to block students who are expressing their frustrations rather than engaging in a healthy argument. Some employees are treating critical students awfully.”

Members from AUSG received a lot of messages of concern from students. But according to them, they are also being harassed by one of the staff from the Adamson by threatening them with disciplinary cases once the staff returns to school or that the staff has “spoken to someone from the NBI.”

The students posted screenshots of these messages on their personal accounts to expose the student repression by the member of the administration of the school.

“I will always stand by what I believe is right,” said another AUSG member who was “harassed by one of the university’s finance office staff.”

The student, who is a student assistant, and was told to resign from this part-time job. The student was also reminded that she enjoyed almost free tuition and allowances from the school, and told the student outright “wala kang utang na loob” and “tumanaw ka ng utang na loob.”

The National Union of Students of the Philippines (NUSP) Metro Manila slammed the “student repression” in the university.

“The students democratic rights are not surrendered in exchange of any scholarship program. The allowances and grants received by student assistants are the compensations for the work rendered to the school,” said NUSP Metro Manila in a statement.