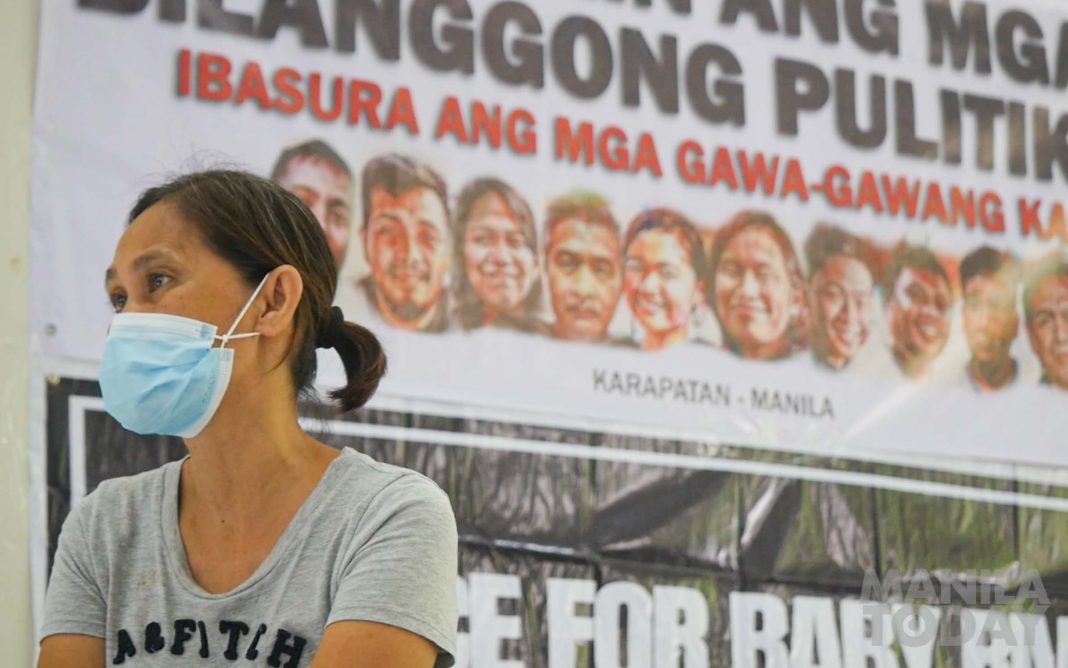 [I believe that an activist is not a terrorist]

Reina, Alma Moran, and Ram Carlo Bautista, or collectively known as Tondo 3, were arrested via a raid crackdown last November 5 2019 in BAYAN Manila headquarters in Tondo. It was the third in a series of police raid operations in Metro Manila since the arrest of activist couple Cora Agovida and Michael Tan Bartolome on October 31 and to Esterlita Suaybaguio on August 26.

They have all been served with the search warrant issued by Quezon City Judge Cecilyn Burgos-Villavert that many human rights groups chided her factory of fabricated warrants only to weaponize law enforcement.

It must be noted that the above-mentioned activists were accused of such claims that they were in a gun-running syndicate amid the alleged firearm and explosive possession. However, the cases of Agovida, Bartolome, and Suaybaguio were dismissed because of “fishing expeditions” and material inconsistencies among police narratives not to mention the unlawful execution of an arrest.

A sigh of relief, still a continuing battle

[There had been so much time wasted that we could have spent with Baby River or with my daughter. Imagine my life in such misery?]

Nanay Marites also recalled the time when wrote a handwritten letter to the Supreme Court and attend mobilization protests to campaign for Ina’s immediate release.

[I started going to the Supreme Court, when Ina had only been in jail for six months. I presented a handwritten letter asking for Ina to be released so that we can take care of her as though might get infected due to COVID-10. She was already pregnant at that time]

Nanay Marites lamented how the year 2020 had been really tough for her, especially going through the pandemic crisis as well as the situation of her daughter and grandchild battling for justice and human rights cause.

[In the two years that my daughter was in prison, and here we all are, little by little. it has been proven that she is really innocent. It hurts me so much to be separated from her. Last 2020, I wonder why that happened? That instead of being happy because she was pregnant, that I would be having my grandchild, however, she was in jail. It has been very painful,”

And to Nanay Marites, the Court of Appeals decision granting the certiorari petition by Tondo 3 had been a breath of relief.

[This is the moment that we may be able to see and embrace her. What happened to her was painful, but the fight continued]

Nanay Marites then thanked the CA alongside the constant support the Nasino family received from individuals, rights advocates and groups like KAPATID, Karapatan, and the likes.

[You have not closed your eyes to the truth. Despite the numerous petitions we submitted that took days, weeks, even years that should have been passed, Ina and rest who were arrested unlawfully, arrested for a crime they did not even commit]

Ina is an activist, I support her

[I know that Ina is an activist, and I support her]

Nanay Marites have always known Ina to be courageous, a fighter, and a rights worker.

Ina was once a student-leader in her school at Eulogio “Amang” Rodriguez Institute of Science and Technology (EARIST) where she helped organized student mass actions and forged alliances and organization formations like Musicians For Peace where she became part of its executive committee.

Nanay Marites shared how their life in a poor community in Pandacan shaped Ina’s character to become driven and struggle for the rights of marginalized and dirt-poor settlers in Manila. And from there she actively campaigned and participated in organizations like Manila Urban Poor Network (MUPN) and Kalipunan ng Damayang Mahihirap (KADAMAY) Manila.

National Capital Region formations of KARAPATAN and Bagong Alyansang Makabayan (BAYAN) led a press conference of which Nanay Marites along with Pia Moran, a mother to Alma, was present in the event last September 8 at the Iglesia Filipina Independiente Church in Taft Ave, Manila.

The same groups also held a Black Friday Protest the day after at the Sto. Niño de Tondo Church.

[They were suppressed because of their political stance. In such an abuse of power resulted in the death of Ina’s daughter]

Lucillo then lambasted Manila City Judge Marivic Balisi-Umali who issued the separation order of Ina and baby River. She also emphasized how the justice system had been tormenting against activists like Tondo 3 in addition to a child who had to succumb to ailment in between the narratives of political persecutions.

[It is proven that the slowness of the justice system in the country has been used several times by those in power to suppress and deny human rights to innocent individuals or organizations, whether they are activists or not]

She further called on for Manila Regional Trial Court Branch 47 Judge Paulino Gallegos to immediately release the Tondo 3 following the appellate court decision which probed on the apparent irregularities in the application and implementation of the Villavert warrants executed against them.

“These apparent irregularities in the application and implementation of the subject search warrants are more than enough to debunk the presumption of regularity of performance of official duties,” the CA noted.