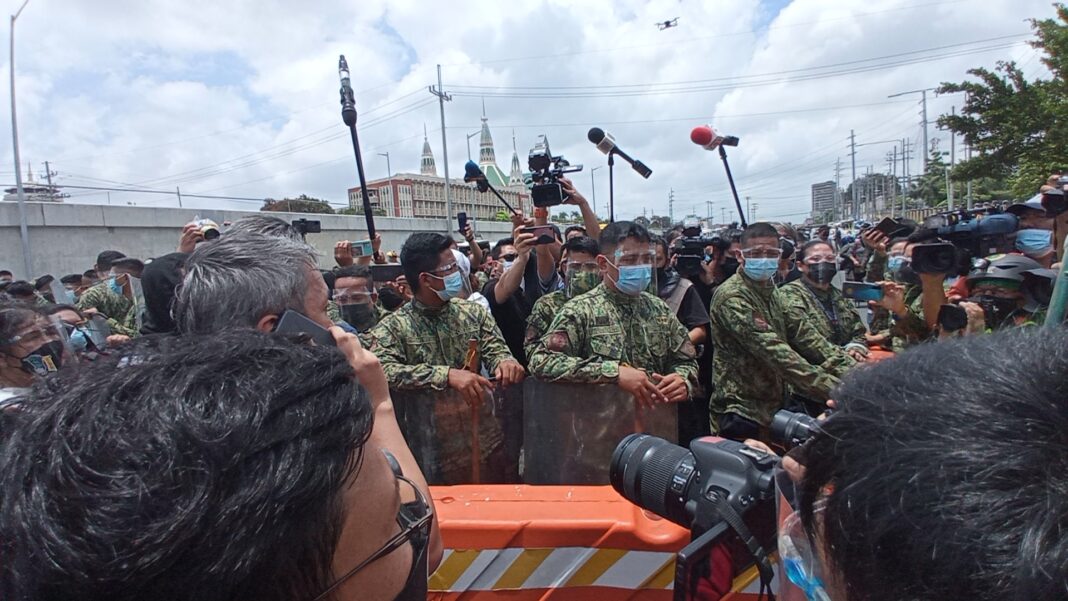 Around 51 police officers from Police Station 3 in Talipapa, Novaliches of the Quezon City Police District (QCPD) who were deployed to secure President Rodrigo Duterte’s last State of the Nation Address (SONA) were found positive for COVID-19.

QCPD Director Brig. Gen. Antonio Yarra announced this on July 28, two days after the SONA, explaining that the 51 police officers underwent routine swab tests by the local government on July 23, three days before the SONA. The results came out only the day after the SONA.

They were among the 118 from the Talipapa Station deployed to “different points” during the SONA.

Yarra was asked whether the police officers who tested positive were deployed at the SONA protest, where around 3,000 attended.

As various sectors prepare for the protest in light of the sixth and last SONA of Duterte, the Department of Health (DOH) reminded protesters and others on the ground, such as police officers to watch out for symptoms such as fever, cough, fatigue, loss of taste and smell, among others.

“As of this time we cannot conclude yet na ‘yung deployment nila as the source of this transmission of COVID-19. So we are clarifying that,” Yarra noted.

What is clear is that the 51 police officers who eventually tested positive were deployed despite pending test results.

“The officers at SONA should not have been deployed and should have waited for the results of the test before they were fielded,” DOH Usec. Maria Rosaro Vergeire said.

A day after the announcement from Yarra, the commander of Police Station 3 in Quezon City was relieved over the deployment of cops with pending COVID-19 test results.

“In view of the apparent breach of protocol when most of these PNP personnel were deployed for SONA duties even if they were still waiting for their RT-PCR results, I have already ordered the administrative relief of the Station Commander, Police Station 3 of the QCPD, for command responsibility,” he said.

The DOH on Thursday (July 29) has recorded 97 new cases of the highly transmissible Delta coronavirus variant to raise the country’s count to 216. Among these, 88 are local, six are returning Filipinos from overseas, and three are still up for confirmation, as per the DOH.

Health officials said 94 cases of Delta variant have effectively been tagged as recovered and three have died. The number of fatalities remained at 8, while there are also 16 active cases.

On July 16, the DOH said that it found 16 infections caused by the Delta variant, first detected in India.

Five of them were returning OFWs from United Arab Emirates, Qatar, and Great Britain between April and June, according to Vergeire. The other 11 were locally acquired cases, including five in a cluster of cases from Cagayan de Oro City. Most of them were unvaccinated. One patient had died.