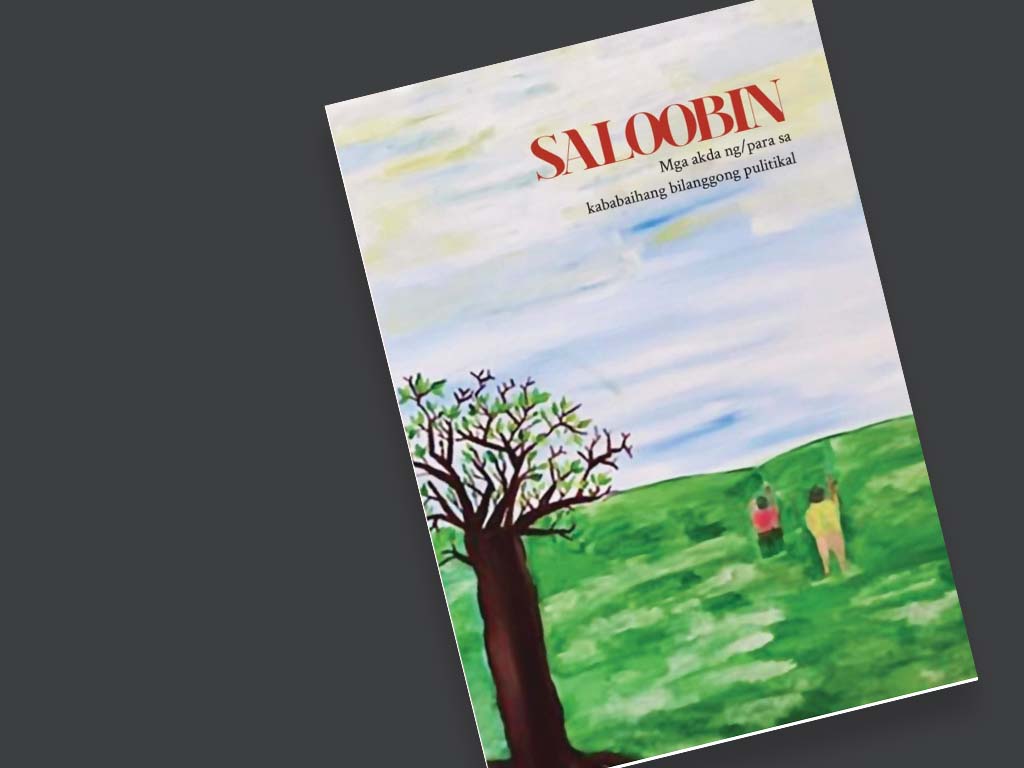 There are now 715 political prisoners in the Philippines of whom 132 or around 18.5 percent are women.

Stories of these women political prisoners are some of those recounted in the literary folio and the book launch of “SaLoobin: Mga Akda ng/para sa Kababaihang Bilanggong Pulitikal.” The work is published by political prisoners’ kin group Kapatid and feminist publishing house Gantala Press.

The book launch was held on July 18, observed internationally as Nelson Mandela Day. Mandela was himself a pollical prisoner detained for 27 years.

The book is an almost women-only written collection of poems, stories, songs, and essays of political prisoners but also their supporters from outside the walls of the prison.

The book’s title is derived from Alma Moran’s essay in Filipino “Sa(Loob)in” which begins and ends with “Hindi laging hari ang dilim” [darkness does not always prevail]. Moran was arrested with Reina Mae Nasino and Ram Carlo Bautista in a midnight police raid on the strength of warrants issued by Quezon City Executive Judge Cecilyn Burgos-Villavert at the BAYAN Manila office in Tondo on November 5, 2019. Their trial continues.

Political prisoners, also called prisoners of conscience—imprisoned for their political activities, their affiliation, or beliefs but usually slapped with common crimes—are languishing in the overcrowded jails in the country during the COVID-19 pandemic.

The first contribution in the book is the poem by Nasino, titled “Pangugulila” and spoke of her longing for baby River. Her baby died a month after being separated from her, against pleas to allow them to be together so the mother can nurture the baby. Baby River was born on July 1 last year, underweight and with yellow skin discoloration, said to be signs of Nasino’s difficult pregnancy in jail and lack of prenatal care.

Cora Agovida wrote poems for the folio. One was on the happy reunion with her husband who like herself was busy doing work among the people as activists, but turned out to be their last time together following their arrest. Another was a poem on how her children were exposed to the police raid and arrest. She was arrested with husband Michael Tan Bartolome and their two children — 10 and 2-year old — at their Manila home on search warrants for firearms and explosives again issued by Villavert. The children were later released to relatives. They are also still on trial.

Amanda Lacaba Echanis, peasant organizer and daughter of slain activist Randall Echanis, wrote three poems for the collection. “Sa Sinapupunan ng Digmaan” [in the womb of revolution] talks of her arrest with her baby. The poem “Ama” [father] reveals her longing for her father. The poem “Ang Kulay Pula” [The color red] is about red-tagging. She was arrested on the usual illegal possession of firearms and explosives case with her 1-month old baby in Baggao, Cagayan on December 2, 2020. It was only four months after her father was slain in Quezon City, during curfew hours and lockdown and no perpetrators have been brought to justice to date.

One of those currently detained is a journalist.

In the book, Frenchie Mae Cumpio wrote an open letter titled “Love means fighting back”, tackling her choice of work and giving words of encouragement to her family, friends, and supporters.

The detained journalist is Frenchie Mae Cumpio, journalist and Executive Director of alternative media outfit Eastern Vista that is based in Tacloban—the area ravaged by typhoon Yolanda (Haiyan) in 2013. She was arrested and detained since February 7, 2020 following a police raid on their office via search warrant for firearms and what many decried as planted evidence. She experienced surveillance and harassment days before her arrest. Her trial continues and she has been detained for 17 months now.

She is the second of three women journalists jailed so far during the administration of President Rodrigo Duterte. Two others have been released.

The first is Anne Krueger of alternative media outfit Panghimutad, raided by police in a similar fashion and whose search warrant only bore “yellow house” instead of a specific address mandated by the Constitution. She was among more than 50 activists, workers, peasant women arrested from October 30 to 31 in simultaneous police raids in search of guns and explosives. The warrants in Bacolod City and Escalante were also issued by Villavert, hailing all the way from Quezon City. She was detained for 11 days, one of those days in the infamous overcrowded city jails in the country before she was allowed to post bail. Her trial continues.

The third is Lady Ann Salem, one of the now-called Human Rights Day 7, arrested on December 10, 2020. It was also the last day of the 16 days of activism against gender-based violence. She was arrested in similar fashion and charges as Cumpio and Krueger. The search warrant issued against her was also by Villavert.

Lady Ann Salem contributed the story of the first two weeks of her incarceration. She wrote of her much-dreaded transfer to the Philippines’ infamously over-congested and dilapidated city jails.

The book is available at the online shopping app Shopee or Gantala Press’ online store.

Ben&Ben x SB19’s ‘Kapangyarihan’ establishes the truth: power is within the hands of masses