Home FEATURES The Women of the First Quarter Storm of 1970: Women “Fully Engaged... 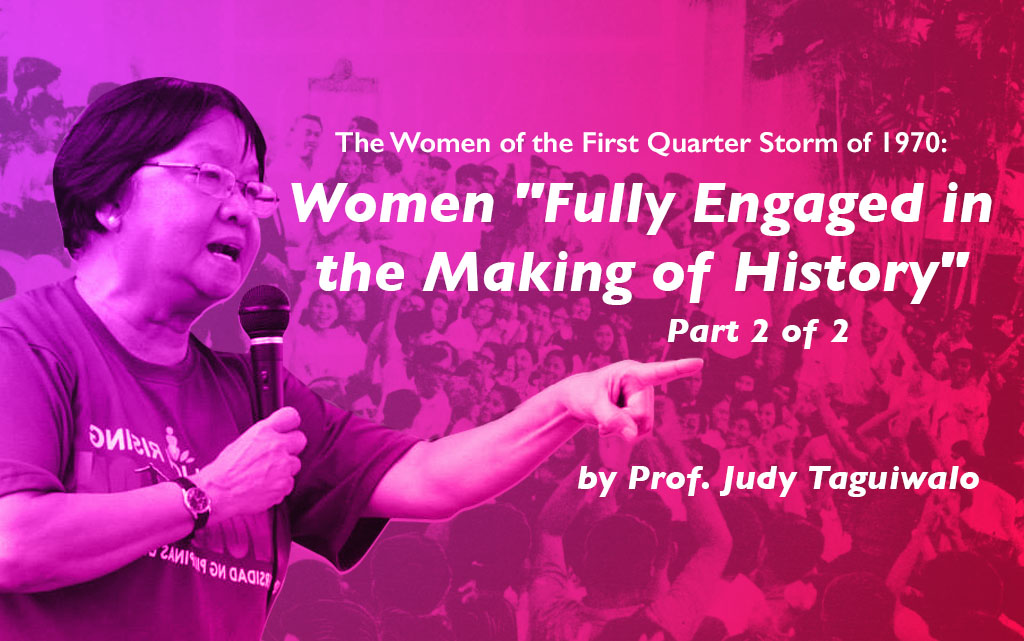 This article was formerly presented by Prof. Judy Taguiwalo to the Filipino-Canadian Youth Alliance Conference at Vancouver, Canada in November 24-25, 2005.

MAKIBAKA became one of the youth organizations espousing and propagating an anti-imperialist, anti-feudal and anti-fascist line in what was then called the “Second Propaganda Movement” recognizing its links with the “First Propaganda Movement” which was the precursor of the founding of the Katipunan and the 1896 Philippine revolution. MAKIBAKA’s uniqueness was in its efforts to elaborate on the general statements that working class women suffer double oppression as members of their class and as women and that women can perform general and specific tasks in the movement.

“Women comprise more than half of the oppressed Filipino people and thus share with men a common burden of social and economic exploitation. In addition to class oppression, however, women suffer male oppression. This second type of oppression is justified by a feudal conservatism which relegates women to the category of domestic chattel, and by a decadent bourgeois misrepresentation of women as mere pleasurable objects.

…Notwithstanding this doubly oppressive condition, however, women comprise one of the most conservative sectors of Philippine society.

“Women comprise more than half of the oppressed Filipino people and thus share with men a common burden of social and economic exploitation.”

Conservative wives and mothers perform the very important social task of perpetuating the values of the old corrupt order. … (T)hey produce nice little girls who never dare to question what anyone in authority says, who themselves believe that women should be seen, not heard, in short, …nice little girls who will be exactly like their mothers: quiet, obedient, passive and suffering their husbands’ philandering and saintly acquiescence to the status quo.”

Laurie continued with an elaboration of what liberation of women meant:

“It means first of all that since the exploitation of women both as members of the oppressed class and as a social group rests on an economic base, liberation entails a restructuring of the economic system and from there the superstructure which is built on. Liberation cannot consist merely of a “change of heart” in either the exploiter or exploited, a turnabout of values. Nor can liberation start from such a “change of heart”; rather it is change in the material conditions which will bring about a ‘change of heart’.

Nor can liberation start from such a “change of heart”; rather it is change in the material conditions which will bring about a ‘change of heart’.

Second, the broad masses of the Filipino people must first be liberated before any sector, such a women, can be liberated. The primary exploitative relation, that between the American imperialists and the landlord-comprador-bureaucrat capitalist allies on the one hand and the Filipino masses on the other, must first of all be destroyed. Only then can new energies be released which will set into motion the social forces necessary for the elimination of other exploitative relations and the construction of a truly, just, equalitarian society.

Third, the liberation of women will not be a boon granted to them by their male liberators; women must seize their freedom, women must fight for it, must smash their prison walls themselves. Otherwise, they will once more be beholden to men, captive to a new set of obligations. Moreover as Frantz Fanon has argued so well, it is only action, usually violent action which is liberating. (ibid:66-67)”

Third, the liberation of women will not be a boon granted to them by their male liberators; women must seize their freedom, women must fight for it, must smash their prison walls themselves.

Jose Ma. Sison’s message to the First National Congress of MAKIBAKA in 1972 forwarded the analysis of the specific character and source of women’s oppression in the Philippines and the current central task of the women’s liberation movement

“In a semi-colonial and semi-feudal country like the Philippines, it is inevitable that women like men suffer from the three systems of authority, such as political authority, clan authority and religious authority. In addition however, women suffer from the authority of the husband or what we may call “male authority”. These four authorities that women have to contend with can easily be seen as expressions of the feudal-patriarchal ideology and system. Though in urban areas, there seems to be blatant reign of bourgeois ideas and values, perceived in their most decadent forms as bred by a cultural imperialism; the feudal-patriarchal ideology and system persists as a countrywide base for prejudices against women. Decades of modern imperialist culture lay over centuries of feudal patriarchalism in our history.

…..It is extremely important for the Women’s Liberation Movement to grasp the line that political authority is the backbone of all the other systems of authority. By overturning that authority, we begin to overturn all the other systems. Political struggle, participating vigorously in the national democratic revolution now, is therefore the key link to the great cause of women’s liberation. The Women’s Liberation movement is basically a political struggle, with a revolutionary mass character. The political authority of foreign imperialism, domestic feudalism and bureaucrat capitalism must be overthrown if Filipino women are to be liberated and achieve equality of the sexes.”

It is extremely important for the Women’s Liberation Movement to grasp the line that political authority is the backbone of all the other systems of authority.

The New Filipina “Engaged in the Making of History”

For many young women activists of the FQS, membership in MAKIBAKA and other youth organizations brought home the point raised by Jose Ma. Sison particularly the point that “political struggle, participating vigorously in the national democratic revolution now, is therefore the key link to the great cause of women’s liberation.” We experienced the liberating effects of political participation as we went beyond women’s place and roles traditionally upheld in Philippine society.

The new woman, the new Filipina, is first and foremost a militant.

Ma. Lorena Barros, in “Liberated Women II” described the new Filipina emerging from her participation in the national struggle:

…The new woman, the new Filipina, is first and foremost a militant…

…The new Filipina is one who can stay whole days and nights with striking workers, learning from them the social realities which her bourgeois education has kept from her….. She is a woman who has discovered the exalting realm of responsibility, a woman fully engaged in the making of history…No longer is she a woman- for- marriage, but more and more a woman- for-action.

To be a militant meant embracing nationalism beyond the externals of wearing the barong tagalog or dancing the tinikling but embracing nationalism as the continuation of the historic struggle of our Filipino forefathers and foremothers for national independence. It meant studying and understanding the roots of the problems in Philippine society and choosing radical change as the means to resolve these problems. This meant participation in collective actions to bring about changes in Philippine society.

Clearly, the woman militant, the new Filipina’s ultimate destination was not as “ilaw ng tahanan”, but as an equal of men in the struggle to end foreign and feudal exploitation and oppression. By opting to be part of the national democratic struggle, the women activists of the FQS of 1970 became, as Laurie put it, “engaged in the making of history”.

Clearly, the woman militant, the new Filipina’s ultimate destination was not as “ilaw ng tahanan”, but as an equal of men in the struggle to end foreign and feudal exploitation and oppression.

MAKIBAKA provided the woman’s voice and viewpoint in the rallies and demonstrations from 1970 until the declaration of martial rule in September 1972. Members marched, acted as marshalls during demonstrations, painted steamers and wrote placards, operated the mimeograph machines, organized chapters, led mass meetings, joined workers’ strikes and learned from the farmers. It began work with mothers in a number of urban poor communites in Manila and set up day care centers and conducted mother’s classes on child care practices. It continued to articulate the progressive women’s opposition to activities such as beauty contests and fashion shows that degrade women.

Resurrecting the past to give it contemporary relevance was also an agenda of the militant women’s movement. It was the Makibaka women in Iloilo who in 1972 prior to the declaration of martial rule, went to Pototan, the hometown of Teresa Magbanua, the Ilongga generala of the 1896 Revolution, and revived interest in the heroine to such a degree that the main street of the town was renamed after Henerala Isay1.

The declaration of martial law in September 21, 1972 ended the growing open protest movement in the cities. Progressive organizations, including MAKIBAKA, were declared illegal and their members were arrested or went underground to participate in other forms of organizations and other forms of struggles.

The existence of the pre-martial law MAKIBAKA was brief-only two and a half years since its founding in April 1970 to its illegalization in September 1972. But its impact on the women’s movement in the Philippines continues to be felt.

Reviews of the women’s movement in the Philippines cannot but cite the significance of MAKIBAKA2.

More importantly, its core message of women’s liberation as inextricably linked with national and class liberation remains alive in the analysis and demands of the legal but militant women’s movement in the Philippines represented by GABRIELA.

I would like to believe that MAKIBAKA’s story as I am retelling it now will be something you, Filipino Canadian youth would “reflect on and give new form” as you yourselves become or are engaged in “making history.”

1 I was part of the group women activists who went to Pototan, Iloilo in 1972 and talked to the descendants of Henerala Isay.

Most photos used were lifted from the “Serve the People” Exhibit of UP Aperture, a photojournalism organization at the University of Philippines Diliman.