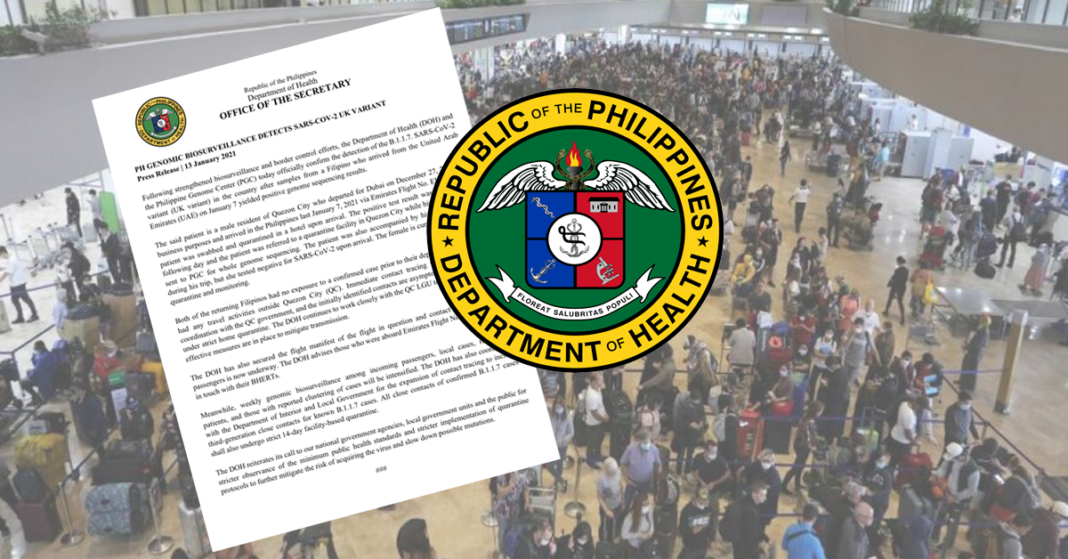 It took six days before a confirmation of detecting the new COVID-19 variant, which originated in the United Kingdom, in the Philippines have reported.

According to Centers for Disease Control and Prevention (CDC), the newly emerged variant was first detected in September 2020 and appeared to “spread more easily and quickly” than other variants.

Who tested positive for the new variant?

The health department along with the Philippine Genome Center detected the B.1.1.7. SARS-CoV-2 variant, or the UK variant, in samples from a 29-year old Filipino who returned home from United Arab Emirates on January 7 this year yielded positive genome sequencing results.

According to the DOH report, the patient is a male resident of Quezon City who fled to Dubai on December 27 for business purposes through Emirates Flight No. EK 332.

The said patient was accompanied by his female partner during the trip. Furthermore, both were tested for COVID-19 and quarantined in a hotel upon arrival. A day after, the male patient tested positive while his partner tested negative. Still, the latter is under a strict quarantine and monitoring.

“Both of the returning Filipinos had no exposure to a confirmed case prior to their departure to Dubai nor had any travel activities outside Quezon City,” the DOH said.

In London last November, around a quarter of cases were the initial reports of UK COVID-19 variant detection. It reached nearly two-thirds of cases in mid-December.

“Immediate contact tracing was done in close coordination with the QC government, and the initially identified contacts are asymptomatic and currently under strict home quarantine,” the health department affirmed.

None of the mentioned individuals have exhibited symptoms, reported by DOH.

Meanwhile, contact tracing of other passengers of Emirates Flight No. EK 332 is now being sought. The aboard individuals were advised to get in touch with their respective barangay health response teams.

Further, the local government of QC said that the patient’s immediate household contacts have also been brought to an isolation facility for testing.

“We have to remain cautious and vigilant to avert the spread of this new variant. What is important is we take care of the resident, and make sure we don’t sow panic in the community,” Mayor Joy Belmonte said.

With the recent incidents regarding COVID-19, the DOH affirmed to have calibrated their monitoring strategy upon conducting a biogenomic surveillance by collecting samples among individuals who will undergo genome sequencing.

This process analyzes a particular sample of the virus in comparison to the other cases and assess whether the two has new variant development.

The expert affirmed that the current reproduction rate of COVID-19 cases in the Philippines is on 1.1, which means that 20,00 cases during the first weeks will be about 32,000 cases in the last weeks.

He furthered that death rates due to COVID-19 would balloon up to 684 rather than 74 prior to the new variant.

Meanwhile, the expert affirmed that there is no evidence of the new variant to cause a more severe illness or higher risk of death, the sheer number of COVID-19 cases would overwhelm the healthcare system therefore reducing its capacity to treat patients.

“This can become very serious, very dangerous if the variant (from the UK) becomes the dominant strain but we should also remember that it’s within our power to control this through our own behavior,” Dr. Wong asserted.

Meanwhile, the Philippines have breached the 492,700 mark with 1,453 new cases as of January 13. Of the total cases, 397 are among the recoveries and 146 were the reported fatalities.