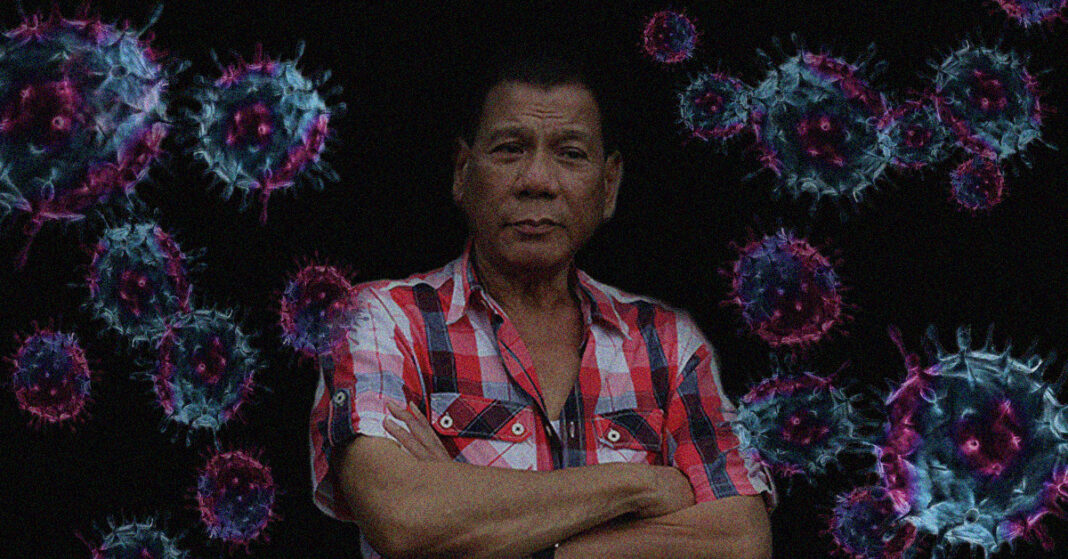 The President of this country is the chief executive that implements, respects, and abides with the law of this nation. However, the COVID-19 pandemic has only given President Rodrigo Duterte to stretch his powers that are beyond the provisions of the law.

The hottest issue is the administration of the vaccines to Presidential Security Group (PSG) in which the defense secretary Delfin Lorenzana, Jr. admitted that such vaccines are “smuggled.”

“The COVID-19 vaccines used by members of the Presidential Security Group (PSG) are indeed smuggled as it was unauthorized, but the intention behind the act is “justified” as it is meant to protect President Rodrigo Duterte,” said Lorenzana in a report from Rappler.

Dr. Eric Domingo, Director General of Food and Drug Administration (FDA) claimed that the administration of vaccines to soldiers and senior government officials is definitely “illegal.”

Civic leader Teresita Ang-See furthered that “thousands of Chinese nationals in the country have already been vaccinated against COVID-19.” Ang-See earlier revealed that “over 100,000 Chinese workers, including those in the Philippine Offshore Gaming Operator (POGO) industry, have already received shots despite the absence of regulatory approval,” as reported by CNN Philippines.

The “vaccines” administered by unidentified “doctors” should be a grieve concern among Filipino people as this will deprive the people who needed the most especially the vulnerable and elderly. When the government implemented the strict lockdown in March 2020, the clamor of the people is mass testing. However, Duterte and his cohorts shrugged off these calls; quoting Roque’s earliest remarks affirming that the government cannot provide “mass testing” for the whole Filipino population despite the fact that the critics deemed for testing to those who are in dire need such as the front line workers, vulnerable, among others.

Needless to say, it took 10 months before Duterte admitted to the public that mass testing is necessary.

As other countries have an ongoing administration and procurement of vaccines, Filipinos mused, “sana all” as if to say the actions done by other countries is the same for the Philippines. Though this was only the beginning of the rising agitation after Duterte revealed that the PSG had already received shots of vaccines.

A question was then posed by the people, “what is really the government’s vaccination plan against COVID-19?”

On the other hand, the Senate scheduled a hearing on “government’s vaccination plan against COVID-19” on January 11 this year. In the hearing, a plan to summon the PSG was prevented by the President himself who invoked the “executive privilege” provided by the Executive Order 464.

Executive Order 464 was issued by former President Gloria Macapagal-Arroyo on September 28, 2005 with a tile:  “Ensuring observance of the principle of separation of powers, adherence to the rule on executive privilege and respect for the rights of public officials appearing in legislative inquiries in aid of legislation under the constitution, and for other purposes.”

In this order, section 22, Article VI of the Philippine Constitution was cited “that heads of departments may, with the prior consent of the President, appear before and be heard by either House of Congress on any matter pertaining to their departments and, when the security of the State or the public interest so requires and the President so states in writing, such appearance shall be conducted in executive session.”

However, in 2010, the Executive Order 464 was already revoked except “the right of the President to forbid executive officials from attending the question hour of the Senate and the House of Representatives, as well as the right to request for a closed-door session if the information involved matters of national security.” This was a Supreme Court (SC) decision when EO 464 was raised by the Senate before the SC to question its legality as it curtailed Congress’ powers to investigate irregularities involving the executive branch.

This executive privilege was invoked by President Duterte and he warned of “trouble should lawmakers force the PSG to appear before the Senate hearing.”

Invoking this executive privilege is a strong manifestation that the Duterte will use his powers to protect not the Filipino people but his interests and of his privileged officials. President Duterte would not hesitate to violate the Philippine constitution just to protect his government to fall down.

The “government’s vaccination plan against COVID-19” is very important because the people’s interest and welfare are at stake. This country has already been dominated by the “privileged few” but the people who needed the vaccines most are the health care responders, the workers that will help recover the Philippine economy alongside the communities that are vulnerable of the infection. Thus, their call is “mass vaccines.”

Indeed, the Philippines is the home of valiant and militant people. They will not standing idle, in the days to come, they will remain shouting for social justice and concrete change.