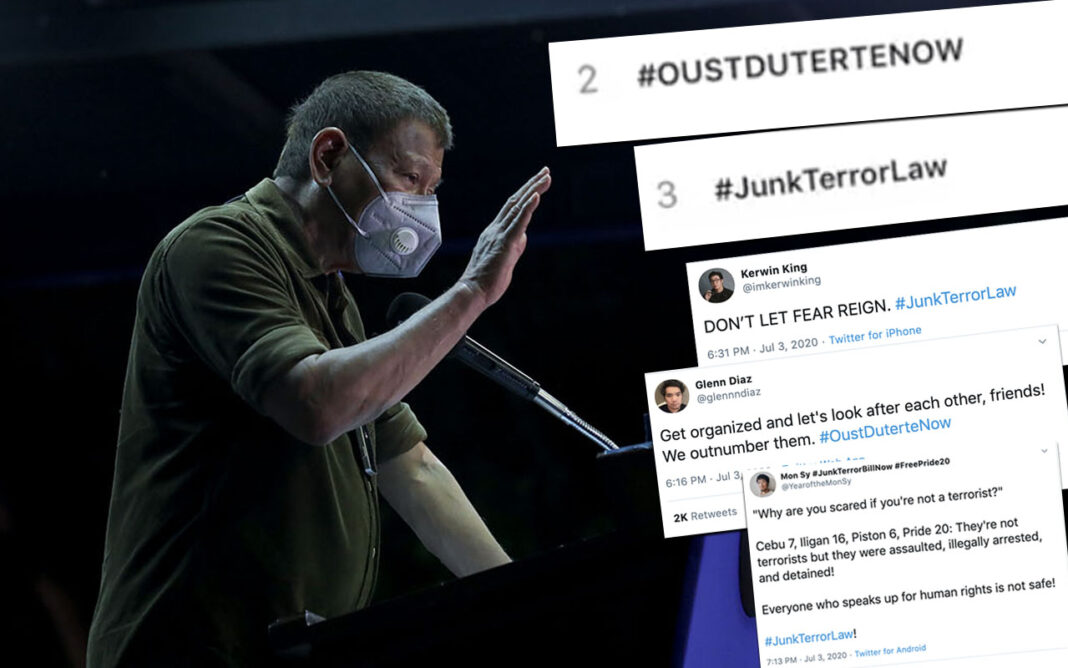 At 6pm on July 3, news broke on the ‘terror bill’ being signed into law by President Rodrigo Duterte and almost instantly, #JunkTerrorLaw and #OUSTDUTERTENOW became trending topics.

Republic Act No 11479 or the Anti-Terrorism Act of 2020 came to be despite massive opposition from all quarters of Philippine society since it was being railroaded in Congress by end of May. The bill would have lapsed into law by July 9, or 30 days after it was transmitted to the president from Congress. The opposition to the bill saw the first physical protest rallies even before the lockdown was eased to a general community quarantine in Metro Manila by June 1.

The public dubbed the measure as ‘terror bill’ for various provisions they found unconstitutional and violative of human rights, as well as seen to target government critics and dissenters and not only actual terrorists.

"Why are you scared if you're not a terrorist?"

Cebu 7, Iligan 16, Piston 6, Pride 20: They're not terrorists but they were assaulted, illegally arrested, and detained!

Everyone who speaks up for human rights is not safe!#JunkTerrorLaw!

Our fundamental rights are at stake now that President Duterte signed the anti-terror bill into law, July 3. Ever since Congress drafted the bill, the public has relentlessly expressed their fear of the massive human rights abuses the bill may bring in its wake. #JunkTerrorLaw pic.twitter.com/KqPaDay3G5

We are in the middle of a pandemic and a health crisis, but the priority of this government? They are flattening the curve of dissent.#OUSTDUTERTENOW #JunkTerrorLaw#FreeMassTestingNow pic.twitter.com/goVHPUR689

We are saddened by the signing Terror Bill that will silenced our fellow Filipino in calling out the government from their wrongdoings and mistreatments. #OUSTDUTERTENOW#VetoTerrorBilllNow
#JunkTerrorLaw pic.twitter.com/rnixdOKsBT

Major TV and radio broadcaster still off the air

Laban is our response. Fight tyranny.#JunkTerrorLaw

Today is a very very dark day for democracy in the Philippines.#OUSTDUTERTENOW#VetoTerrorBilllNow

WILL TWEET THIS AS LONG AS IT IS NEEDED. #VetoTerrorBillNow#OUSTDUTERTENOW pic.twitter.com/Hy7lXLlHHe

other asian countries turning covid free and returning back to their normal lives and this is what the philippine government is doing? no. WE WON’T BE SILENCED. #OUSTDUTERTENOW#VetoTerrorBilllNow

Get organized and let's look after each other, friends! We outnumber them. #OustDuterteNow

They really continued to prioritize signing this bill over the lives of the Filipinos being lost in a pandemic. You have every reason to be mad and every right to criticize this government's incompetence.#OUSTDUTERTENOW#VetoTerrorBilllNow

The cowardly fascist terrorist Rodrigo Duterte signed the Anti-Terrorism Act on a Friday, knowing full well that various groups are ready to file petitions to challenge the law before the Supreme Court and that courts are not open during Saturdays. #OustDuterteNow

A signed copy of the law was posted at the Official Gazette at around 10am on July 3.