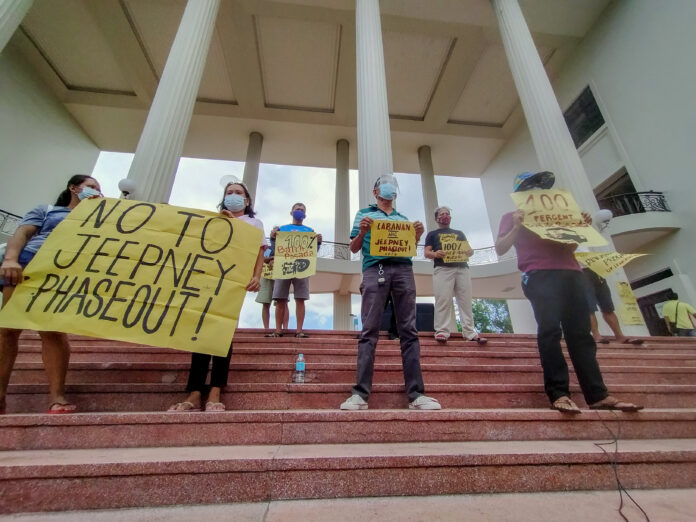 In a press conference held at the Quezon Hall of University of the Philippines Diliman, various transport groups unite and reiterated the call to junk government’s Public Utility Vehicle Modernization Program.

The PUV Modernization Program was launched as early as 2017 by the Department of Transportation. It was met by staunch resistance by transport groups nationwide as it would mean death to jeepney drivers and operators.

From 2017 to 2019, jeepney strikes were spearheaded by progressive groups to oppose the phaseout of jeepneys.

However, the Coronavirus pandemic provided the perfect backdrop for government to continue the modernization program. Public transportation was halted and jeepney drivers were amongst the hardest hit by the lockdown. Many jeepney drivers turned to begging for alms just to survive.

Last September 2020, The LTFRB  opened jeepney routes but many others were left behind

The UP Jeepney drivers were allowed to ply their routes but their livelihood is severely hampered by the government’s policies.

Magallanes explained informal workers such as barkers and vendors will also be affected by the jeepney phaseout as their livelihood is also interconnected with the jeepney sector.

No to Phaseout, Yes to Modernization

Efren De Luna of ACTO (Alliance of Concerned Transport Organization) clarified that jeepney modernization should not be made at the expense of jeepney drivers and operators.

According to De Luna, the evolution of the jeepney itself is the product of modernization. He explained that the jeepney was an innovation of Filipinos to fill the need for an effective mass transport system.. The jeeps were originally surplus vehicles after World War 2. Filipinos modified these to accommodate more passengers as the transportation infrastructure expanded in the metropolis.. However, this is all about to change with the influx of E-Jeeps.

Under the jeepney modernization, the vehicles to be used are exorbitantly priced, costing up to P1.9M to  P2.4M each.

Youth in solidarity with drivers

Engels Caballero of SIKHAY, a progressive youth organization based in Marikina, said that the jeepney transport sector is a public service.

He added that students and jeepney drivers both suffer from government neglect.

Clara Senga of League of Filipino Students encouraged the youth to unite with jeepney drivers.

On February 01, 2021, progressive groups will be holding a protest caravan against the Jeepney phaseout