Home NEWS Three women and a minor arrested after dispute with guards, police in... 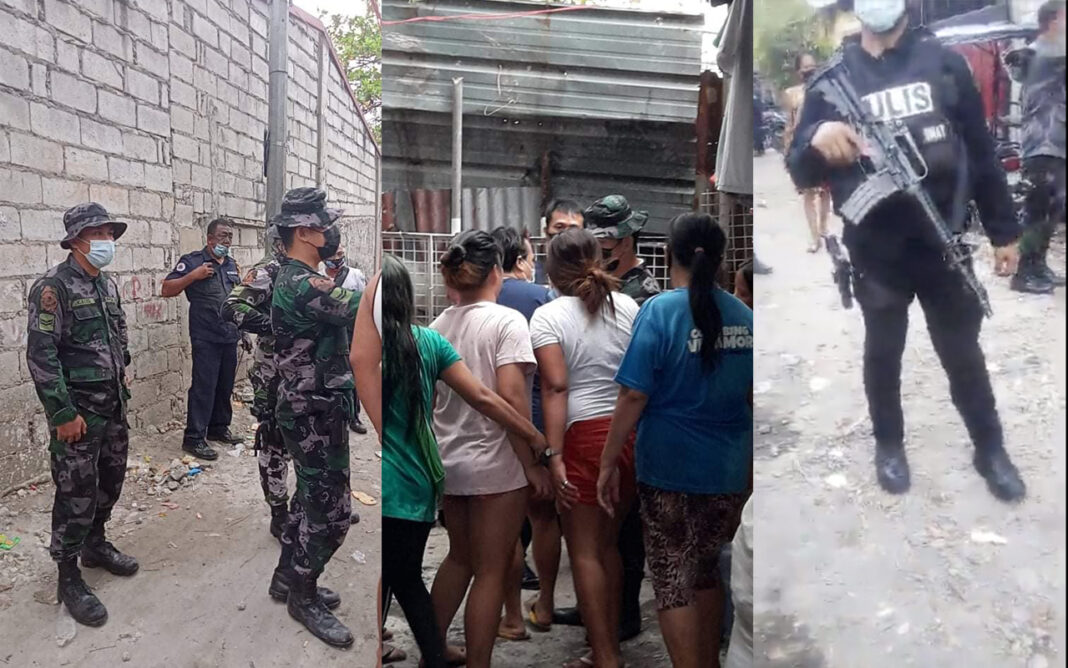 Three women and a minor were arrested following a heated exchange between the residents of Nagkakaisang Residente ng Maysapang Homeowners Association (NRMHOA) and police elements police along with the security guards from Jericko Security Agency of R-II Builders on November 26 in Maysapang, Brgy. Ususan, Taguig City.

The incident started when guards and policed entered the community. Guards accused a resident of threatening them with a bolo knife days before, and the police used the information to go to the community and search the houses without a warrant, residents said. The guards also tried to dismantle a gate in the community amid protest of residents. Guards then grabbed some residents, including minors, that residents tried to pry from the guards. A warning shot was fired.

Canoos was then released after confirmation that she was a minor, while the other three are currently detained in Taguig City Police Station.

According to NRMHOA board member Girly Caduco, the commotion began around 11:00 am when the guards forcibly entered and surveyed the area in Pascual Compound.

The said compound included in the area of Maysapang which was ravaged by fire last November 1 due to an explosion of a defective liquefied petroleum gas (LPG) affecting at least 19 families. Eight houses completely burned.

Threats of land-grabbing, eviction, demolition, along with series of harassment and physical violence have been experienced by the residents of Maysapang since 2015.

Since the fire incident in Pascual Compound, the guards kept on returning to take pictures, and this has since created unrest in the area. Residents said that the guards even forcibly remove the tent and other materials that they use for roofing from rain and other weather confitions

By the time the guards arrived along with some police personnel, the guards were carrying a hammer and immediately went inside the compound to detach the metal gate which was intended for security and protection of residents amid the COVID-19 pandemic.

The police then barged inside three houses without even presenting a search warrant upon the residents’ inquiry, said Caduco.

[They were looking for a man selling coconuts since the other day.]

Caduco said the guards have shown a picture of the man to the police, alleging that the man was threatening them with a bolo knife. The police used the picture as evidence prior to their search conduct without the basis of search and arrest warrant.

The residents argued that the authorities were not able to present any legal documents such as any court order to remove their personal propery such as the gate and the illegal search among the three houses in the compound.

The man whom the guards were looking for is the husband of one of the detained individuals, Olacao.

The residents decried allegations the guards against her Olacao’s husband.

A warning shot intensified the heightened commotion, according to the residents. Live videos of the encounter were uploaded in NRMHOA’s Facebook account.

Among the arrested individuals was a 16-year-old minor, Shynie Rose Canoos, who sustained some injuries during the heated tension in Maysapang.

Canoos lamented the various physical harm inflicted by the guards and the police.

In one of the recorded video footage the residents recorded, a minor was being choked by the police whom they called Dugong. When asked what led to that incident, the minor said that he only stood between the police trying to arrest his brother.

Because of the series of harassment marred with physical violence sustained by several residents of Pascual Compound in Maysapang, the police requested for them to report it to the barangay, but prior to this was a scene with several police reading them their Miranda rights.

There were already blotter cases filed by the residents to the barangay hall in Ususan against the guards from Jericko Security Agency in view of the harassments and chaos they instigated.

The women were instead blamed and scolded upon reaching police station in Ususan.

Meanwhile, the women were all dumbfounded upon finding out that they were being charged over allegations of direct assault, unjust vexation, and public scandal while they were probed in the police station.

At first, Canoos said that the police officers did not believe she was only a 16-year old minor. She was included among the women who have been taken of their mugshots in view of the presented charges.

The three were immediately turned in to get their medical and went to the Taguig Police Station where they have been handcuffed. Canoos, on the other hand, stayed in the Southern Police District waiting for her legal papers confirming that she was in fact a minor.

Caduco affirmed that several residents of NRMHOA have long been settling in the area of Maysapang since 1986.

Aside from the harassment, R-II builders through the guards from Jericko Security Agency prohibit the entering of materials the residents are to use for housing repair and developments.

Furthermore, the residents believed that the fire incident prompted R-II Builders to take opportunity prior to the loss of their houses and properties.

On November 2013, R-II Builders/MGS Consortium won the lease sales in a bidding put up by the Bases Conversion and Development Authority (BCDA) which included the 5.2 hectares of Brgy. Ususan in Taguig City.

Of the 5.2 hectares that the BCDA put up for lease, the 3.7 hectares lived more than 500 families of Maysapang.

Last 2004, the local government of Taguig City issued the Resolution 107 series of 2004 supporting the demand of Maysapang residents to acquire the land.

The NRMHOA also found out from the Department of Environment and Natural Resources that the area of which the residents are settling is comprised in the Executive Order (EO) No. 465 released on October 3, 2005 declaring that the portions of property the BCDA owns is intended as socialized housing sites.

On the other hand, according to Caduco, the residents of Maysapang should not be blamed as though they have only learned the violence from authorities reinforcing their power through the use of force.