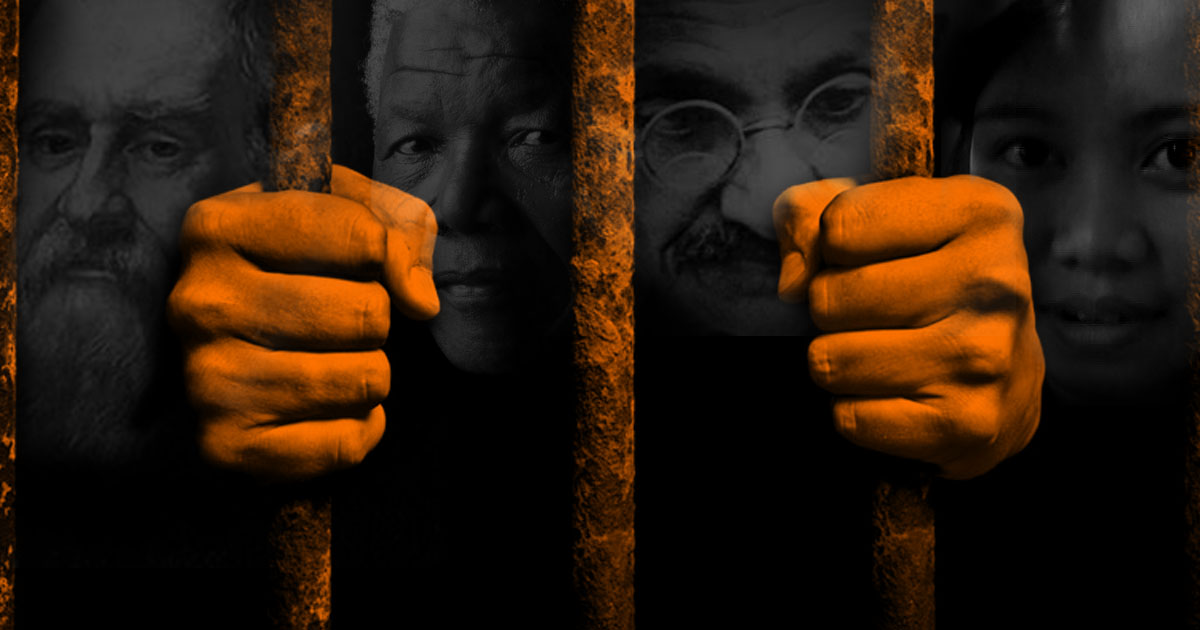 The first century once saw a man shake the foundations of religious belief and the dominant social order.  For questioning the teachings of the high church of the Pharisees and Sadducees at the time, the same man would end up persecuted, mocked, and nailed to a cross. He would one day be iconized in modern Judeo-Christian religion for countless generations as Jesus, or known to believers as the Son of God.

Jesus is only one of the numerous iconic victims of state fascism. For his opposing political and religious views, he later paid the price as the elites and the powerful church orders unleashed their vengeance.

But stories of repression aren’t mere tales shelved in history text books. To this day, countless persecutions abound and more evidently seen in the field of conflicting politics.

A history of repression of innovation, dissent

History apparently has stood witness to a longstanding culture of repression, one that persecuted revolutionary thinkers and movers.

Astronomer and physicist Galileo Galillei for instance was charged with heresay, and later on imprisoned for supporting the Copernican theory, the idea that the earth revolved around the sun, contrary to the dominant belief that planets including the sun revolved around the earth.

The great Albert Einstein himself, together with numerous intellectuals suffered persecution via burning of their treasured books because their ideas did not favor then German ruler Adolf Hitler who was bashing non-German intellectualism and Jewish ideas. Hitler and his Nazi army would suffer complete defeat from the people of the USSR despite many books failing to recognize this.

Religious and political figure Mahatma Gandhi was likewise sentenced to jail numerous times for his non-violent activism against social injustice, unjust taxation, and for boycotting the British socioeconomic dictates in India. The people rallied behind Gandhi’s ideas for these changes to happen in one of the most populous countries of the world, while the oppressors from the past to present now use Gandhi as a symbol of pacifism.

Political activist Nelson Mandela, on the other hand, faced lifetime imprisonment for opposing racial discrimination and apartheid in South Africa. Mandela would later become president of the former White colony through the popular support of the people.

Political imprisonment is one of the many forms of fascism instigated by the modern dominant political order. A political prisoner can be described as someone who is imprisoned for his political activities, either for criticizing the government, or for opposing its policies or programs.

In the Philippines, several victims of political imprisonment include activists advocating for basic human rights, with causes spanning from land reform, food security, better working conditions, down to human rights, housing, education, social services, and lasting peace for the country.

During Martial Law (from 1972 until arguably the fall of president-turned-dictator Ferdinand Marcos in 1986), for instance, human rights watch group Karapatan cites that over 120,000 people were imprisoned for opposing the long-standing dictatorship.

More recently, Maricon Montajes, a film student of the University of the Philippines-Diliman, and a staunch advocate of student rights, who later on decided to live among peasants in their communities to understand and document their plight, ended up being arrested for illegal possession of firearms and ammunitions, illegal possession of explosives, and a violation of the omnibus election code. She is currently detained at the Batangas City Provincial Jail, recorded as the youngest political prisoner.

Montajes is only one of hundreds of political prisoners. Karapatan tallies a total of 525 political prisoners as of June 30, 2016. Of the number 117 are considered sickly, 47 are aged, and 129 already facing more than a decade behind bars. To keep them shut, most political prisoners are accused of heinous crimes or non-bailable criminal charges such as illegal possession of firearms, robbery, murder, arson, and kidnapping.

In this post-Martial Law era, that political prisoners suffer in illegal detention through trumped-up charges, nameless or alias warrants and other evasions of due process is abominable.

This also begs the question, despite their valid beliefs and the freedoms (press, expression, political beliefs, assembly, organization, etc.) restored in the ‘restoration of democracy’ in 1986, why do political prisoners face years – or lifetime – behind bars?

Karapatan says the phenomenon of political prisoners in the country must be viewed in the context of an armed conflict and the struggle for better socio-economic conditions.

According to the website of the National Democratic Front of the Philippines (NDFP), the united front organization of revolutionary groups, their political activities and advocacies are in line with the pursuit of “national freedom” and the “democratic rights of the people.”

The NDFP points out that among their socio-economic programs include implementing genuine land reform and national industrialization, adopting “comprehensive and progressive social policies,” promoting democratic rights and a nationalist culture, “upholding the rights of the Bangsa Moro and the Cordillera peoples and other indigenous peoples to self-determination and democracy,” emancipation of women, and an independent and peaceful foreign policy, to name a few.

It is in this line with these pro-people advocacies of political prisoners that rights groups like Karapatan are continuously advocating for their release. Groups are vigilantly calling on the granting of a general amnesty without having to comply to terms and conditions, and with the outlook that all charges will be dropped.

The makers and making of history

Various progressive groups laud the recent release of NDFP consultants including Communist Party of the Philippines leaders Benito and Wilma Tiamzon alongside the 17 others as a genuine step in the pursuance the peace talks. But they stressed that the next round of talks pose yet bigger challenges, as social, economic reforms, political, and constitutional reforms, are up in line at the negotiating table and if agreed, actually meant a change in the status quo. A cordial atmosphere was observed in the resumption of the formal talks between the Government of the Philippines and the NDFP in August, with both peace panels agreeing on all six point in their agenda. If these reforms long-needed by the Filipino people would be agreed next, the following steps towards changing the system might not be as peaceful or formal a transition as the talks, considering other powerful forces at play and deep-seated influences of this old, moribund order.

Varying opinions and views will always be present in a society. And fascism and political repression is the option of a sitting government whenever pressed by the people to make further advancements towards social justice and social change and whenever the government in power is opposed to changing the status quo. The case with today’s administration is looking a lot different. But, as history has proven, it is the people who make history happen—this is actually the third lesson.