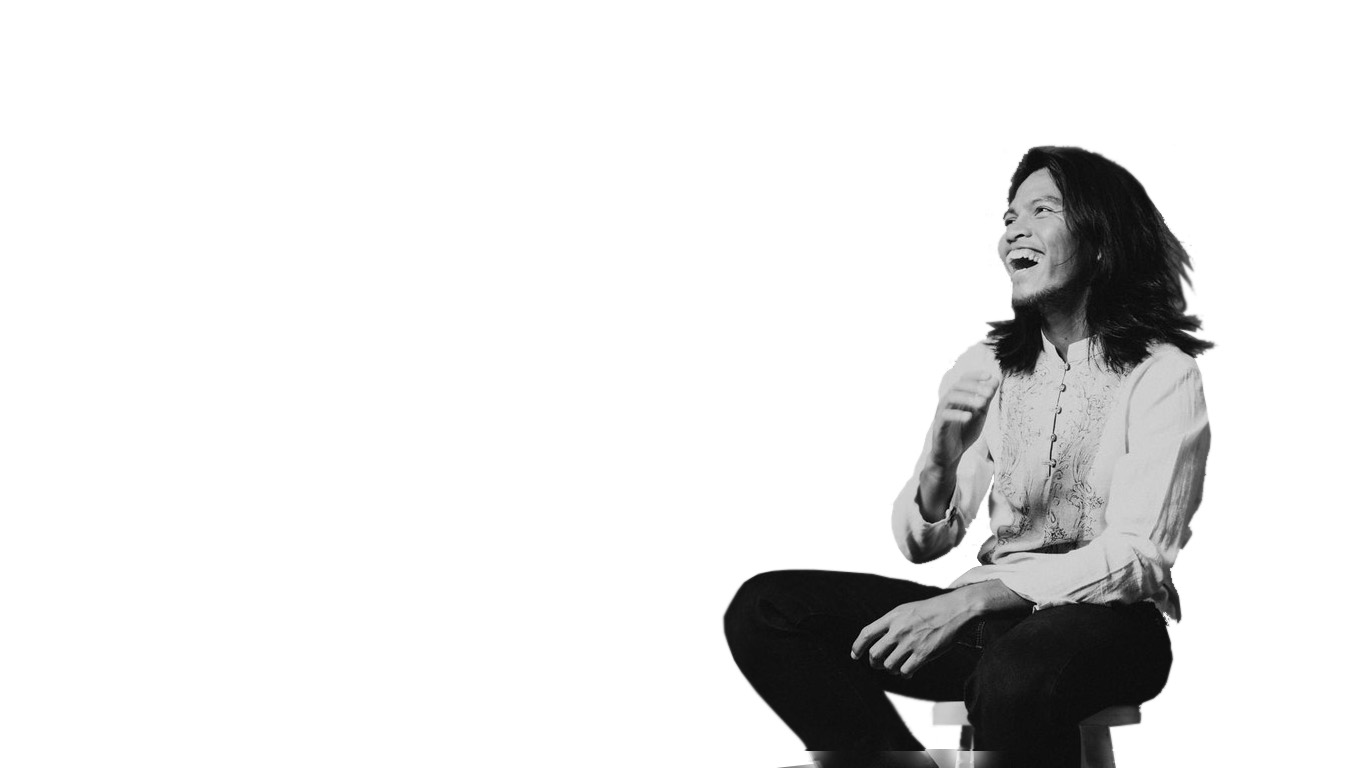 The beginning of the twenty-first century in the Philippines saw an overwhelming enthusiasm for acoustic guitar music. Radio stations, TV programs, cafés, pubs, and restaurants exhausted the audience/listeners with acoustic music. Immediately talents like Paolo Santos, Nyoy Volante, Jimmy Bondoc, and the acoustic group MYMP rose to fame. Their acoustic repertoire of romantic songs, mainly a deafening series of covers, was the staple diet of radio stations and local musicians. It seemed as though the official musical establishment in the Philippines at that time had declared a Martial Law of acoustic genre in the auditory domain that it was almost impossible to hear a song that was not an acoustic version of the original.

But resistance to the tyranny of acoustic guitar music was equally significant if not more dramatic, represented by bands which embody the New Rock in OPM: bands like Slapshock, Bamboo, Urbandub, Imago, Barbie’s Cradle, the ever evolving Rivermaya, Sandwich, and, perhaps the most interesting of them all, Up Dharma Down. 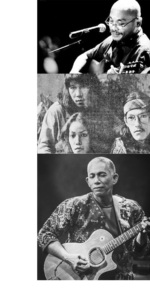 There is a robust and lively tradition of acoustic music in the country being for the most part an artistic product of folk artists. The pioneers of folk music–Asin, Buklod, Joey Ayala, Freddie Aguilar, Gary Granada and others– introduced in OPM a distinct Filipino acoustic sound. Moreover, they have given music a strong social aspect which stressed on social change and concern for the environment. Folk artists in the Philippines are, borrowing the French philosopher Sarte’s term, engaged musicians. By all accounts, folk music in the Philippines is decisively an artistic ally of the political left. (The fate of Freddie Aguilar is somewhat a digression from the self-appointed task of folk musicianship. His nasty attempt to run for office and his outright support for the current oppressive regime is a complete betrayal of the sentimental humanism of his art.)

But for all its musical and artistic integrity, folk music’s affair with political activism has made its appeal marginal in the wider music scene, although its moral influence is unquestionable. As is the case there is an unfair publicity and poor diffusion of folk music in the mainstream media only compensated by a handful of events and areas where one can attend to hear and see it live. Compared to the popularity and omnipresence of acoustic mainstream championed by acoustic talents who major in cover songs and their moderately interesting originals, folk music is peripheral. This is sad, for it inhibits and limits the range of our musical experience. And this situation applies to other musical genres which are deprived of broader public reach, like jazz, classical music, and world music (traditional music of other countries). For this reason one doesn’t regret the existence of Youtube and other online music outlets for their capacity to expose listeners, especially the younger generation, to other musical forms and genres.

We live in a time of cacophonous, ostentatious, market-driven talent shows (which are no different from beauty pageants) designed to appeal to lowest common denominator levels of taste, intelligence, and attention span. They are carefully engineered to banalize the artistic potential of aspiring talents, smooth away their particularities by integrating them into a fixed image, morbidly branding them in a way that is acceptable and familiar to the public. The public, on the other hand, is meant to be “entertained” rather than be exalted, challenged, and nourished by musical experience. What happens is that our musical landscape is infected by a monopolizing brand of sound and style which spills over to the lower ladder of the music scene–the social media music industry. Market influence engulfs everything.

This doesn’t mean one cannot find serious talents inside and outside the radar of the official musical establishment. On the contrary, there are noticeable talents everywhere: the problem is they fail to become artists. For instance, in the acoustic domain, many are skillful, many have the voice; they are tantalizing, entertaining, they are sensational, they are cute; but they don’t have significantly new or striking to offer musically, artistically. Moreover, very few challenges us, very few exalt us, very few enrich us. Among that very few Bullet Dumas is the most convincing, the most exciting, the most subtle representative. 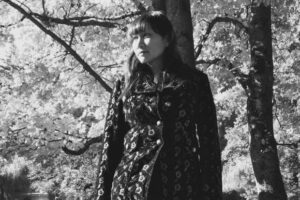 In the last twenty years of lively, relentless but undramatic acoustic production–with the sole exception of the amazing Cynthia Alexander who’s on a level of her own–there has never been a musician who went much beyond anyone else in exploring, with magnificent results, the range and capacity of composition in acoustic guitar music than Bullet Dumas. And he is alone in this. He is giving acoustic guitar music a new and decisively challenging fulfillment.

Dumas is introducing an exhilarating style and invention in acoustic genre we haven’t heard for a very long time. In this period of preposterous talent shows and self-indulging social media videos, the appearance of Bullet Dumas in the music scene is both illuminating and challenging moment to music lovers and to music itself. Here’s why:

Rhythm is fundamental in Dumas’ style. His use of rhythmic nuance as a basic structural device for his compositions is one of the challenging aspects of his music. There is in Dumas’ rhythmic pulse a strong sense of joy. Rarely do we find a singer/songwriter/guitarist who can strum the guitar with such tremendous joy as in the songs from his EP–Pssst and Ninuno, and all the songs in his superb latest album Usisa. There is robust swinging in his right hand, the strumming hand, which produces a mixture of orchestral thickness and percussive effect in his instrument and endows his songs, originally composed solely for guitar and voice, their inevitable fulness and stridency. Unlike many of the pop songs composed on the acoustic guitar which proceed on predictable, worn-out rhythmic patterns, a Dumas song is rhythmically demanding not only of their technical aspect but of their inherent energy and joy. He can turn simple chord progressions–as in the minor chord progressions in the songs Halata and Usisa–into exciting, audacious and intelligent compositions.

Parallel to his energetic rhythm is his rebellious melodies. His songs are built on melodies distinctly the singer’s own. One listens to any one of his songs and is struck by its unusual melody. This is the common criticism of the people I’ve asked about his music. This is understandable. For a long time, acoustic OPM has remained stale, redundant, immature, often dominated by exasperating remakes of hit songs of the past, and the musical mannerism that prevails in OPM, in acoustic guitar music to say the least, has succeeded in establishing a kind of status quo in our auditory experience and an unimaginative approach to songwriting that to encounter music of a Bullet Dumas for the first time inspires a slight resistance, a kind of dissonance in our hearing. Because we are in the presence of a songwriter who takes melodic experimentation seriously.

His songs are an aesthetic rebellion against the unrefined and static sonorities of commercial music. He brings forth not only novelty in songwriting but also a radical approach to singing. He is one of the handful of singers today who truly feels secure and comfortable with his singing, one who trusts his voice and intonation which is sometimes interpreted by listeners as crude and odd. Precisely because his voice is crude and odd that make his music engaging and unique. This makes him a sophisticated singer. Although there are more technically gifted and better trained singers than him, his ability to command a unique singing style out of an awesome range of musical influences is what ultimately separates him from the rest. 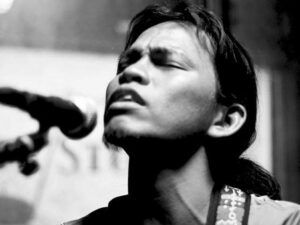 His capacity as a lyricist too is something to be reckoned with. As all artists are also creatures of their environment, a strong social and political conviction animates some of his songs. In this, he continues the political musicality of folk tradition. But, as with other great folk musicians, he never loses sight of musicality as a more engaging influence than the political aspect. His ability to transform sentimental clichés of love in songwriting into creatively awkward and original love songs: songs like Hain Ka, Put to Waste, and Pre- / -Post have poetic quality in them. One never gets bored and sentimental when listening to his love songs.

As music lovers we are grateful for Bullet Dumas and for his music. As an artist Dumas challenges our musical complacency, expands our musical taste, he is taking our ears to places they haven’t been. He takes risks: for this he is a role model for other artists. His love for experimentation and his inventiveness; his respect for the imagination and his courage to give it concrete musical realization is something truly admirable especially in our time of triumphant market values in which the commercialization of art and the ubiquitous commodification of culture dominates our cultural life. He refuses to give in to what is fashionable, to what is acclaimed, to the parochialism rampant in the music industry, rather he enlarges the possibilities for music and musicians alike, and heightens our pleasure as listeners. By fulfilling his potential Bullet Dumas makes music that challenges, excites and nourishes us. Listening to him makes us a little more intelligent listeners.

Carlo Rey Lacsamana is a Filipino, born and raised in Manila, Philippines. Since 2005, he has been living and working in the Tuscan town of Lucca, Italy. Follow him on Instagram.