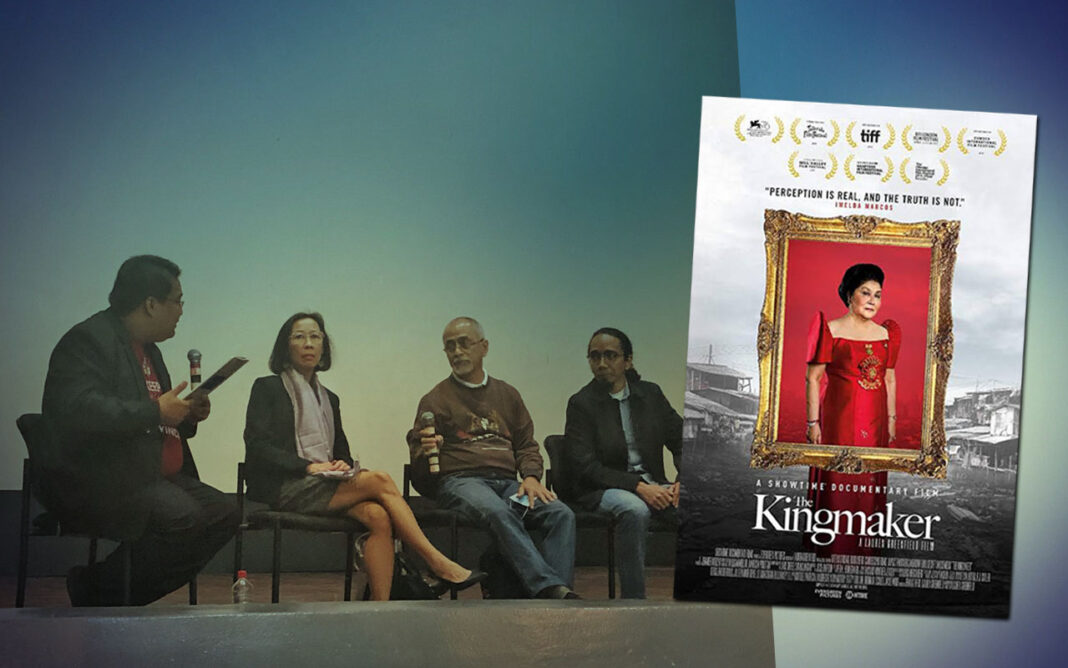 The UP Film Institute (UPFI) held the screening of The Kingmaker at the Cine Adarna on January 29, the same date as the Cultural Center of the Philippines (CCP). It was the film’s premiere in the country.

The Kingmaker is a documentary by Lauren Greenfield about Philippines’ former First Lady Imelda Marcos. It had its world premiere at the Venice Film Festival in August 2019.

The film drew great interest locally when the CCP announced the Philippine premiere of the documentary following the much-criticized lavish dinner the CCP threw for Marcos to ‘honor’ her as the CCP’s founding chair on January 15. The lavish dinner drew flak on social media, many calling it in bad taste for holding it during the Taal volcano eruptions that displaced thousands and amid news on those affected asking for food and water on the streets whenever relief goods run out or did not arrive. Others were angered with the government cultural agency wanting to ‘honor a convicted human rights violator and plunderer.’

The CCP announcing the Philippine premiere of the documentary right after the lavish dinner was curious to say the least. From reviews of the film in its screenings outside the country, the film is not about to flatter Mrs. Marcos. Tickets were sold out. A screening in UPFI was set and tickets were sold out as well.

“The UPFI is not screening The Kingmaker simply to make a partisan, anti-Marcos statement. Thought it must not be mistaken for anything else, we are certain what the Marcoses had done to our people. They had plundered us, silenced us, taken away our liberties and continue to do so in our national mind today flaunting their impunity, calling lies the truth, trying to make fools of us all,” said UPFI Director Patrick Campos in his speech during the premiere.

Campos said the purpose of the screening in keeping with the mandate of the Film Center of creating public forum.

“Did the Marcoses plunder the nation? Did they perpetuate abuse of power? Did they commit human rights violations to silence their opponents? Did they go unpunished for their crimes? Do they continue to exercise influence in Philippine politics today? And by extension we can ask, why have our screenings for example in the Film Institute about Martial Law have been red-tagged? Who are being appointed to state cultural agencies? Why have our prize-winning filmmakers turned to being propagandists? Why is CCP throwing filthy, lavish dinners for Imelda as if they still owe her something?” Campos enumerated some questions the film and/or the audiences would answer after seeing The Kingmaker.

But contradicting Marcos in her philosophy of “perception is everything, truth is nothing” in the purpose and act of screening the film itself, Campos said “A screening such as this one is but one way of revealing how perception is indeed created and engineered and how truth which we must all try to uncover, stand for and fight for is everything. In our coming together in this room to watch a film is a political act, which anticipates a next step we must all decide to take once we leave the theater. Never forget, never again.”

Coming out of the theater becomes a reunion for many people – finding themselves to be from the same circles of organizations, political inclinations or academic community – or it maybe usually what a screening in UP is like especially when a controversial film was screened. Also present were some of those whom Greenfield referred to as “truth tellers” in her film, like Pete Lacaba who saw the film on its premiere at the UPFI.

The other part about coming out of the theater after seeing a film as hyped as this one is hearing the burst of initial reactions.

There has always been a sort of fixation in seeing a film on Imelda. We are almost anxious to hear what conceit she will say, what extravagance will she show, and she will not disappoint to our horror. We possibly almost always want to see or hear what she will let slip or admit about the crimes her family committed – and she never did. They never did. Never did even acknowledge much more apologize.

“The most compelling part for me is seeing how Imelda treats her servants and the film was able to show that, despite possibly not meaning to put her in a bad light. She broke a frame and a servant picked up the shards of glasses with bare hands and she went on with the interview as if nothing happened. When she wanted to show the camera something, she makes a servant hold it up like she is an easel,” said Ariel, a musician.

Ariel disdained how Imelda is naturally unkind to the poor yet she talks about being a mother to the people.

“Imelda has an amnesia about the ugly things in her life – and with that, she is consistent with her slogan of only recognizing ‘the beautiful’ and to that we can agree, but definitely what she says is not the true and the good,” said Sarah, a journalist.

Sarah said Imelda’s amnesia is also consistent with the way she tries to erase in her mind and everyone else’s the gross human rights violations during her husband’s reign.

“How the film connects the Marcos regime to the present day must be emphasized – and it’s not just a pattern. Duterte’s links to the Marcoses, the campaign money, the burial of the dictator in the Heroes’ Cemetery. The same gross human rights record, cronyism and patronage, the use of perception through bombardment of fake news and trolls,” said Karen, a video journalist.

Karen said it was like seeing Duterte taking a page from Marcos’ book and trying to outdo the former dictator.

“The people’s struggle is absent in the film, it was like the Marcoses versus the rival political family or faction in government. It would have been more compelling and gut-wrenching to see and hear that than some known people who at one time have been in government, the same government that is still corrupt to the core after the Marcoses left and now that they are trying to return,” said Krystel, a photographer and youth activist.

“The filmmaker’s access to Imelda and the Marcos family is something. It showed a lot of behind the scenes stuff with the family, though we loathe to look at them,” said Revy, a film student.

A taped interview with Greenfield was shown at the end of the film and right before the panel discussion. Greenfield cannot be present in the premiere, so the video allowed the filmmaker to share about her documentary.

The filmmaker shared that the idea for the film came from an article she read about how Marcos depopulated an island of its indigenous people to bring animals from Africa – despite there being a ban on removing these animals from their homeland and because of Marcos’ idea of creating a ‘paradise.’

“I started with this story of extravagance thinking it was going to be a historic story and it just came to be rushing to the present. As the story evolved and as Bongbong Marcos ran for vice president and this is actually a comeback story. I started following the comeback and that turned out to be much more relevant, resonant story than staying with the animal island which became really a metaphor,” said Greenfield.

It took her five years to create the film, reading books and watching films on the Marcoses, recording 80 interviews that was mostly for her information and did not end up in the film, shot 500 hours of footage and went through 500 hours more of footage of historical archives.

“I felt my responsibility was truth and journalistic accuracy and every time Imelda Marcos said something that did not align with historical accounts or first person witnesses, I needed to also get that point of view. Sometimes it’s by a person, sometimes it’s by archival footage where we can see what actually happened and I think that these other voices become extremely compelling,” Greenfield shared about her process.

She referred to a part in the film where she saw and recorded how the Marcos reign was being taught in basic education as a mind-blowing experience.

“I had heard from some of the activists and some people commenting on the popularity of Bongbong Marcos campaign. Young people do not remember what happened before 1986 and Martial law was not rigorously taught in school and was not taught enough. And when they come out with many positive attributes, many which echo the false narratives the Marcoses were saying, either Imelda to me in person or what had been on social media. It was stunning and scary to hear these accounts,” said Greenfield.

She underscored the importance of teaching history derived from this experience.

The panel discussion that came after the video focused on answering the question – or because it was a recurring comment or question in the open forum – where did we go wrong that we have allowed or afforded the Marcoses even a chance at a comeback?

Bonifacio Ilagan, a Martial Law survivor and activist, instead wanted to focus on what we can do now as an answer.

[Let us join organizations that chant ‘serve the people’ and ‘struggle, do not be afraid.’ As long as there are youth who will strengthen the mass movement, our movement will never be defeated.]

[When I joined I was not advised it would take us into old age. It will take time, but there is no other path but this. Let us use our critical faculties, continue to refresh history, join the mass movement.]

The UPFI held the screening of The Kingmaker to commemorate the 50th anniversary of the First Quarter Storm (FQS), a series of protests led by youth groups in the first three months of 1970 against the worsening corruption in government and price hikes. Marcos will declare Martial Law after two years, citing quelling the growing communist insurgency as the reason. The youth of that period, along with the rest of the nation, would rise up and overthrow the dictator in the 1986 People Power.