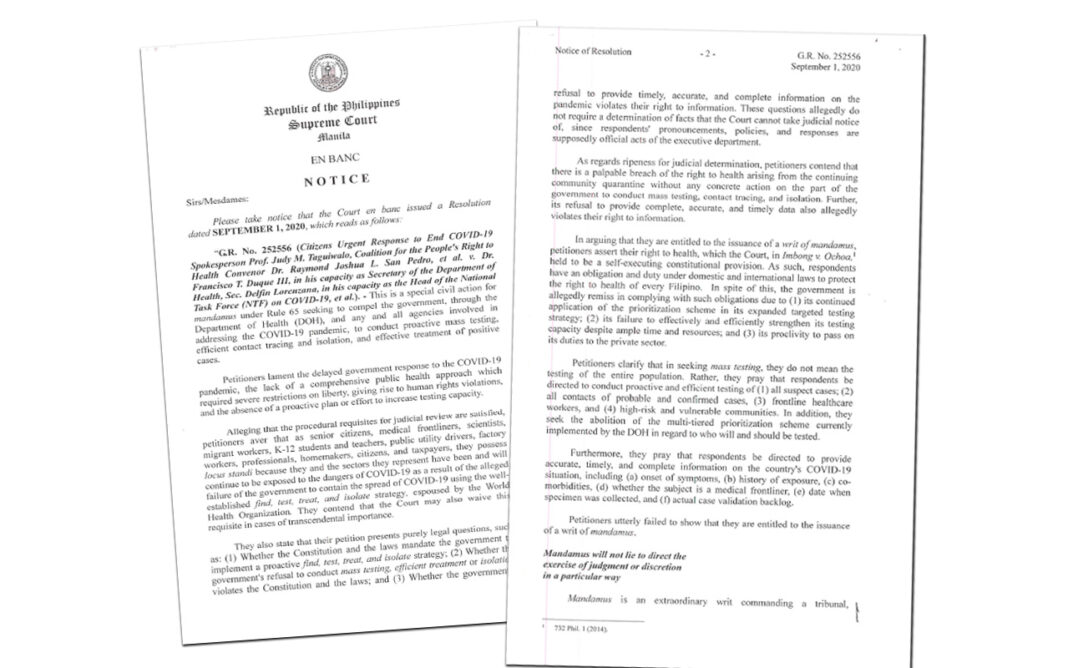 The Supreme Court (SC) en banc rejected a petition demanding the Duterte government to conduct mass testing amid the COVID-19 pandemic, stressing “The job of the Court is to say what the law is, not dictate how another branch of government should do its job.”

The resolution notice was released on September 1 but received only after a 15-day interval by the petitioners.

Upon rejecting the plea, the SC further noted that the petitioners have failed to compromise with the necessary administrative remedies as they could resort to consult the Health, Interior and other departments, even the Office of the President prior to their appeal for writ of mandamus.

The writ of mandamus is a unique order by which it is issued by the judge compelling a tribunal, corporation, board, officer or person to execute a legal duty as regards upholding the law or correcting an abuse of discretion.

“While the Constitution enjoins respondents to protect the right to health, mandamus will not lie to compel them to exercise said protection in a certain way or to a certain degree,” the SC reasoned.

“Without a demonstration that an official in the executive branch failed to perform a mandatory, non-discretionary duty, courts have no authority to issue a writ of mandamus, no matter how dire the emergency,” it added.

Associate Justice Marvic Leonen stated that the SC should have at least get a comment from the government in lieu of the petition and adjudicate cases if the ruling had “a significant impact on social, political and economic life of the nation.”

“That alone should have prompted this Court to at least require respondents to file a comment without necessarily giving due course to the Petition. A comment would have given a fuller exposition of the constitutional issues raised, this time from respondents’ view,” Leonen added.

Leonen emphasized that the petitioners’ plea for “accurate and timely information” regarding COVID-19 pandemic involves matters of public concern and interest. Furthermore, the said plea relied on the laws in view of the guidelines set by World Health Organization along with the constitutional right to health.

“The Department of Health’s obligations set by the law and the International Health Regulations are the same ones that petitioners raise in this case. Without the effective response system that complies with the World Health Organization’s recommendations, petitioners allege that respondents deny them their right to health,” Leonen said.

This is the 5th time that the SC has dismissed a petition without requiring respondents to comment. In recent months, the High Court previously junked pleas seeking to compel the Office of the President to disclose President Rodrigo Duterte’s health records, challenge to the Bayanihan to Heal As One Act and to the quarantine measures the government put in place.

People’s rights “up in the air”

In a press statement released by National Union of Peoples’ Lawyers (NUPL) which represented Taguiwalo’s group in their petition on September 16, the union stressed that the high tribunal’s dismissal “leaves the people’s right to health and to information up in the air” in times when proactive mass testing and effective contact tracing is in need to address COVID-19 pandemic.

“For the half year that we have been placed under quarantine, we have not seen significant improvements in mass testing, contract tracing and isolation. Confirmed cases of COVID-19 are spiking once again while our medical frontliners and resources continue to be exhausted,” NUPL affirmed.

NUPL blasted the Duterte government in view of its heavily dependence to China[1] since then, hoping that it will prioritize the Philippines soon as it develops the vaccine.

“The government is counting not on itself and what it can do to arrest the health crisis once and for all, but on coronavirus vaccines from other countries that have yet to come,” NUPL added.