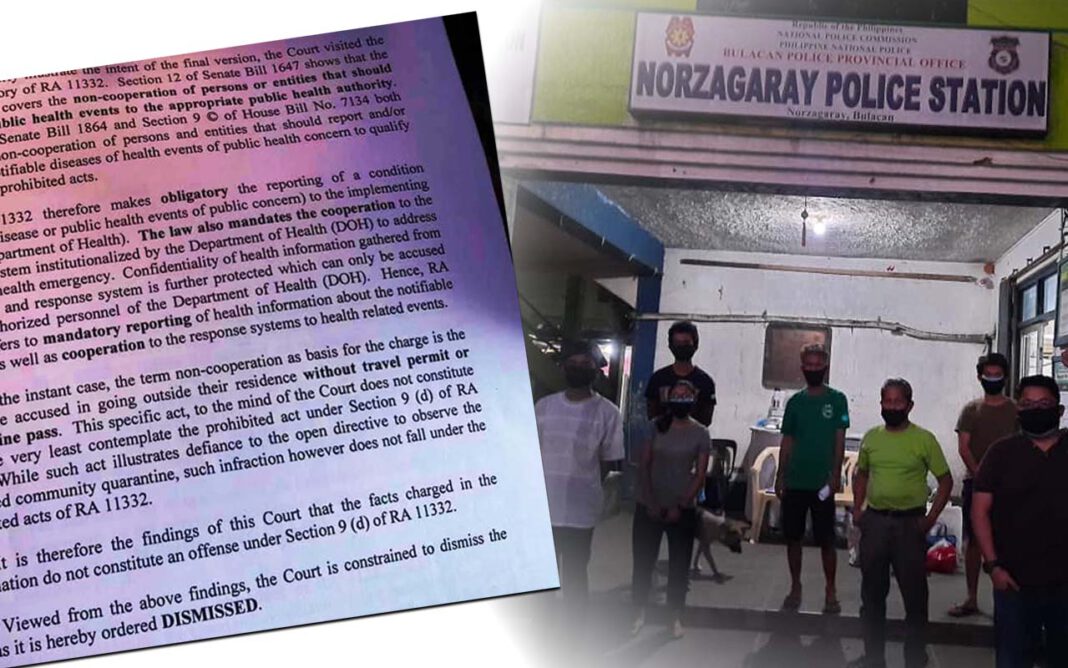 The case against Anakpawis relief volunteers citing violation against Republic Act (RA) 11332 was dismissed by the judge of the Municipal Trial Court of Norzagaray, Bulacan.

Former Anakpawis Partylist representative Ariel “Ka Ayik” Casilao and six volunteers for the Tulong Anakpawis – Sagip Kanayunan were arrested and detained while on their way to a relief mission on April 19.

Anakpawis said that the dismissal of the cases exposes the abuses of elements of the police, when they apprehended the six volunteers who were on their way to the community of peasant beneficiaries. Casilao who came to their aid was also arrested and detained. They were held for three days, waiting for charges to be filed against them and were released after posting P40,000 each as bail.

The group asserted that the dismissal of the case also exposes the abuses of police during the lockdown.

The Philippine National Police (PNP) charged Casilao and the volunteers with violating Section 9 of the RA 11332 or the Mandatory Reporting of Notifiable Diseases and Health Events of Public Health Concern Act, one of a few laws that the government cited for which the public would be held liable if they violate the lockdown guidelines of the Inter-Agency Task Force on Emerging Infectious Diseases (IATF).

The dismissed charges that police said were violated in the law were: “(a) Unauthorized disclosure of private and confidential information pertaining to a patient’s medical condition or treatment; (b) Tampering of records or intentionally providing misinformation; (c) Non-operation of the disease surveillance and response systems; (d) Non-cooperation of persons and entities that should report and/or respond to notifiable diseases or health events of public concern; and (e) Non-cooperation of the person or entities identified as having the notifiable disease, or affected by the health event of public concern.”

“We are vindicated. We asserted then that we did not violate any law, and it was a relief mission.  It was a failure of judgment by the police to apprehend the volunteers, which was followed by the filing of a garbage case to the court,” said Casilao in a press statement.

There are still pending cases that the relief workers will face, including inciting to sedition and usurpation of authority.

“They did so because along with the relief packs were newsletters critical of the government, and because many, as courtesy, still address me as a congressman,” he said.

During the time of their arrest, the group said they have provided relief packs to 2,000 families from different communities in Cavite, Bulacan, Rizal, Batangas, Isabela, Cagayan and Sorsogon, mostly those who were not able to receive aid from the government. The sources of the relief packs are mainly from donations.

No basis for arrests and detention

The National Union of Peoples’ Lawyers (NUPL) have explained how the basis of many of the arrests was “violation of quarantine rules” which they said is in reality not a legal basis because the so called “quarantine rules” are ill-defined and do not contain provisions for arrests and detention.

NUPL said that Executive Order 112 and IATF Resolution 30 or what they sometimes refer to as “ECQ rules” do not provide for the arrest of supposed violators probably because the IATF and the Executive know that they cannot promulgate penal laws since such power belongs to Congress.

The Bayanihan to Heal as One Act, RA 11332 and Disobedience to a Person in Authority under Art. 151 of the Revised Penal Code were then used by police as basis of arrests.

The group averred that all these laws, however, cannot be used to arrest, much less, detain alleged offenders.

On April 19, at around 10:15 a.m., the said relief volunteers were apprehended at the checkpoint in the boundaries of San Jose Del Monte City and Norzagaray in Bulacan. They were on a humanitarian relief mission scheduled to deliver relief packs to a farming community of Sitio Kalye Onse, Barangay Bigte in Norzagaray. Despite having a food pass from the Bureau of Fisheries and Aquatic Resources valid until June 30 and volunteers wearing face masks and observing physical distancing inside the vehicle, the police illegally apprehended them and took them to Norzagaray police station for questioning.

Around 12:30p.m., the relief volunteers were allowed to leave the police station after Anakpawis vice president Ariel Casilao negotiated with Norzagaray police chief Lt. Col. Jaime Quicho. They agreed that the goods will be turned over to the barangay for distribution to the beneficiaries. However, after a few minutes, the relief volunteers were called back to the police station.

More than a day passed before charges were brought upon the relief volunteers and they would be detained for three days. They have not rested since before the relief mission when they packed the relief goods.

Anakpawis assailed then how Department of Interior and Local Government (DILG) Undersecretary Jonathan Malaya said that the food pass was ‘unauthorized’, in effect justifying the ‘illegal’ arrest of relief volunteers. 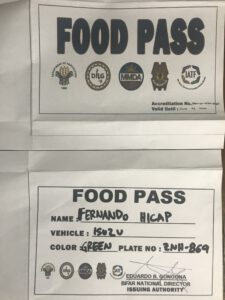 PAMALAKAYA National Chairperson Fernando Hicap said that his group has applied and acquired the food pass in April 17. The food pass has accreditation number BFAR-00-2020-22169 and validity period until June 30, 2020, and was signed by BFAR Director and Agriculture Undersecretary Eduardo Gongona. It was used for the relief efforts of Tulong Anakpawis and Sagip Kanayunan, as PAMALAKAYA is one their lead organizations.

On April 25, after another president’s press briefing that focused on New Peoples’ Army and less about how exactly the P352 billion budget on the pandemic was utilized, the National Task Force to End Local Communist Armed Conflict (NTF-ELCAC) released a list of the organizations “referred to by Duterte.” 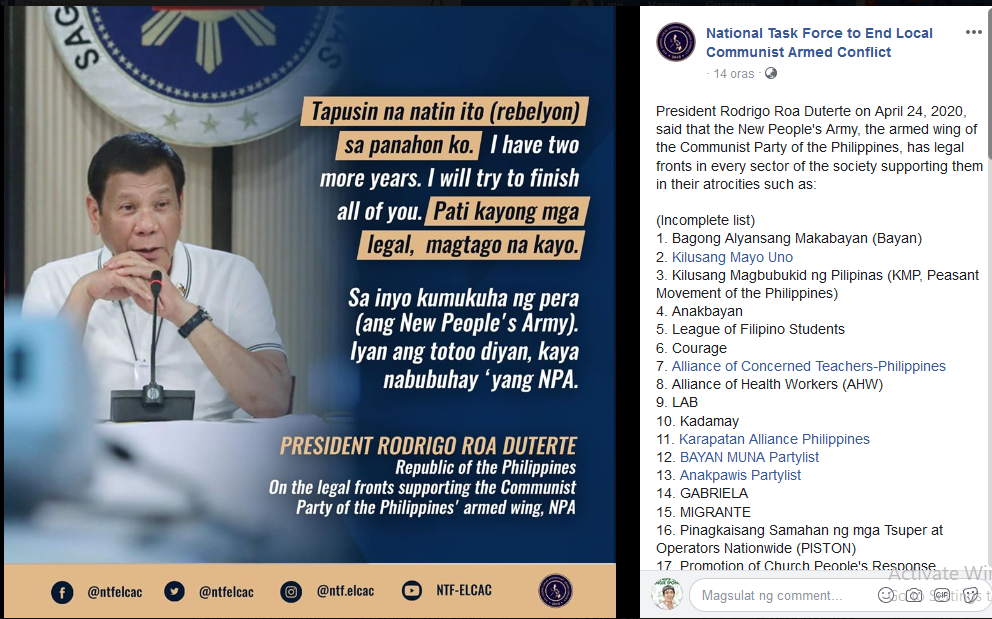