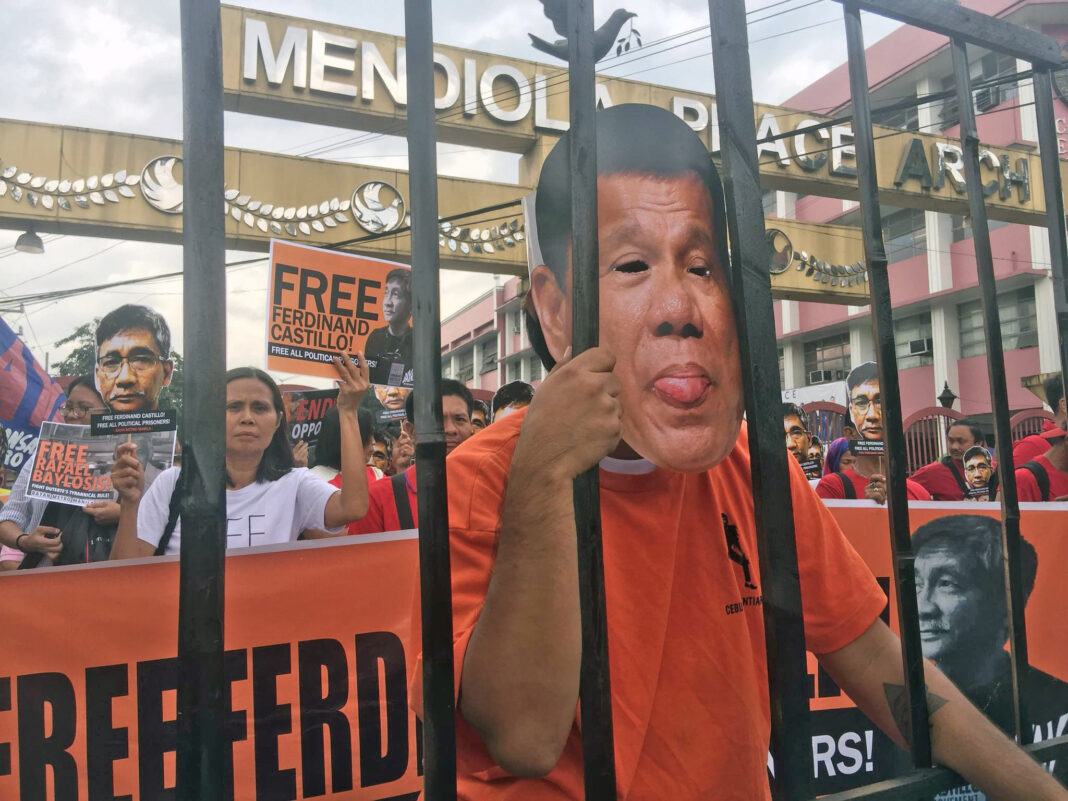 A year after his arrest, families and colleagues of Bagong Alyansang Makabayan (Bayan) Metro Manila campaign officer and National Democratic Front of the Philippines (NDFP) consultant Ferdinand Castillo marched to Mendiola today to reiterate their call for his immediate release. They also condemned the administration’s attack on activists and government critics.

According to human rights group Karapatan, there are almost 486 political prisoners in the country. Of the 486, 145 were arrested under President Rodrigo Duterte and six are peace consultants and persons protected by the Joint Agreement on Security and Immunity Guarantees (JASIG).

Bayan Metro Manila said that, like Baylosis, Castillo was illegally arrested and detained on trumped-up charges. Castillo was arrested on February 12 last year in Sta. Quiteria, Caloocan City by the Central Intelligence Detection Group (CIDG) who identified him as a drug pusher to bystanders to make his arrest appear as a drug bust and accused him to be in possession of a gun. Baylosis was arrested in Katipunan Avenue, Quezon City without an outstanding warrant and charged with carrying a gun on his waist in broad daylight, only for the police charge to reflect a day later to said Baylosis was also in possession of a grenade, making the case non-bailable.

Castillo was detained for a time in Camp Crame, accused as a member of the New People’s Army and falsely charged with murder and rebellion. He was transferred to the Special Intensive Care Area (SICA) 1  in Camp Bagong Diwa along with other political prisoners.

“His year of incarceration meant a year of injustice for him and for the rest of the political prisoners. It also speaks of President Duterte’s record of violating human rights of people and insincerity in the peace talks,” said Nona Andaya-Castillo, wife of Ferdinand Castillo.

Castillo was the first to be arrested after Duterte halted the peace talks with the National Democratic Front (NDFP) and lifted the unilateral ceasefire with the New People’s Army (NPA) in February last year. When the peace talks resumed in April, government negotiators promised to uphold their commitment to release political prisoners, Castillo included, as a goodwill measure and in adherence to JASIG.

Those policies included red tagging of activists, critics and community leaders, affirming US directives categorizing New People’s Army (NPA) and the Communist Party of the Philippines (CPP) as terrorist groups accompanied by a shoot-to-kill order and bombing communities in Mindanao under Martial Law.

Protesters today would join the rally on February 24, commemorating the first People Power that overthrew the Marcos dictatorship.