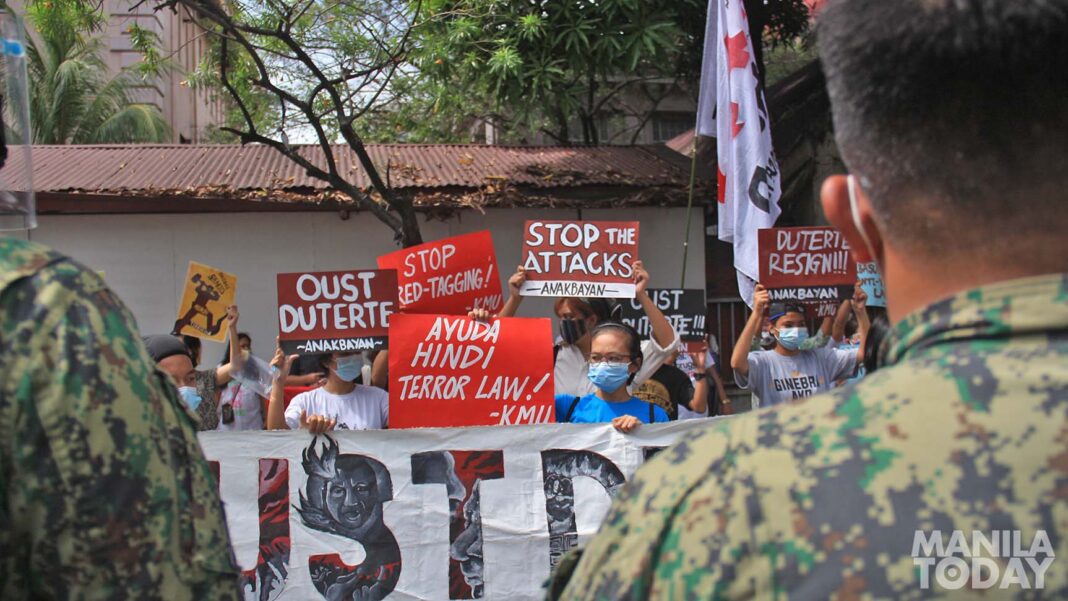 In the first year of the enactment of the Anti-Terrorism Act of 2020 (ATL), also referred as ‘terror law’ by its critics, various groups protested in front of Supreme Court (SC) to condemn the law “amid escalating human rights violations.”

There are 37 petitions against the law filed at the SC since last year, that now awaits the resolution after oral arguments ended on May 17.

Rights group Karapatan has documented 25 incidents of massacres under the Duterte administration, resulting in the killing of 121 individuals. The latest of these is the Lianga 2 massacre, where three Lumad-Manobo were killed and two of them allegedly raped, including a 12 year old student.

Kilusang Mayo Uno spokesperson Jerome Adonis called for an investigation on ongoing the arrests of activists based on fabricated warrants while also red-tagging them as members of the New People’s Army (NPA). Some, like the nine in “Bloody Sunday” exactly four months ago, were killed for allegedly “fighting back” (nanlaban), an oft-used police explanation for casualties in the bloody war on drugs.

Kabataan Partylist Metro Manila organizer Donald Navayra affirmed that the weaponization of the law against government dissenters through laws like ATL served to suppress the youth in voicing out their freedom of speech. Navayra shared an incident in University of Caloocan City where a student had been expelled due to his affiliation to the National Union of Students of the Philippines.

Protesters tore a big image of the ‘terror law’ as they called on the Supreme Court to strike down the law.

No temporary restraining order has been granted so far, as most if not all petitions demanded such relief, leaving the law in effect. The implementing rules and regulations of the law drafted by the Department of Justice was approved by the Anti-Terrorism Council on October 14.