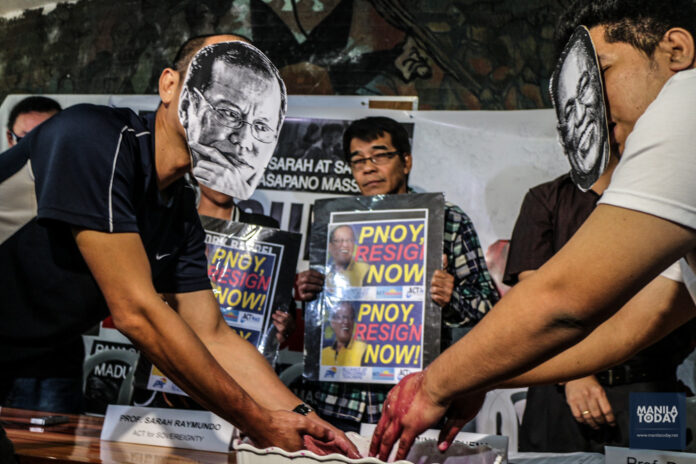 On February 11, teachers from the University of the Philippines (UP) Diliman called for the resignation of President Noynoy Aquino III over the issues of Mamapasano clash and rampant corruption hounding his presidency. They were joined by members of the Alliance of Concerned Teachers (ACT), composed of teachers in secondary and tertiary levels serving in Metro Manila.

On January 25, 44 elite commandos of the PNP Special Action Force were killed in an operation to purportedly serve a warrant of arrest to Malaysian bomber Zukilfi bin Adhir, alias ‘Marwan’ and Filipino counterpart Basit Usman in Mamasapano, Maguindanao. Marwan and Usman has a combined $6 million bounty on their heads, issued by the government of the United States of America (US).

Civilians were also amongst the casualties reported, with at least two confirmed dead in the aftermath of the police operation. An eight-year old child, Sarah Panangulon, died after sustaining gunshot wounds after PNP-SAF forces allegedly fired indiscriminately at their family’s hut. Badrudin Langalan, a farmer from Barangay Tukanalipao, was found hogtied and dead at the wooden bridge near the site of the battle.

The clandestine operation, dubbed “Operation Wolverine,” was allegedly instigated by the US government with the cooperation of top-level Filipino officials including President Aquino and suspended PNP chief Alan Purisima. Senator Miriam Defensor-Santiago, in the Senate hearing on Mamasapano clash on February 12, said that it could not only be Napenas, who is at the moment taking responsibility for the whole encounter, who knew and went ahead with the operation. Santiago pointed that President Aquino also knew and is responsible, since it has been established that all other officials in the chain-of-command between the two have been left in the dark.

The teachers and professors also raised the issue of the unconstitutionality of the Disbursement Acceleration Program (DAP) as a ground for the president’s removal from office. DAP was affirmed as unconstitutional by the Supreme Court last February 3, effectively junking the motion for reconsideration filed by President Aquino’s lawyers via the Office of the Solicitor General.

According to the group, the call for Aquino’s resignation is a continuation of last year’s decision of various teachers’ groups to file an impeachment complaint against Aquino on the issue of the DAP.

According to Professor Sarah Raymundo of ACT, the US must also be implicated in what transpired in Mamasapano.

“US Imperialism is a global bully that exports its skewed notion of ‘peace’ and ‘democracy’ around the world,” she stressed.

“US military forces, through the Joint Special Operations Task Force-Philippines set up base at Camp Navarro in Zamboanga way back in 2002 to fight terrorism,” Raymundo added.

In a news report by media outfit Pinoy Weekly, an eyewitness related that an American soldier was amongst those killed in the Mamasapano clash.

Back in 2009, former Philippine Navy Lieutenant Senior Grade Nancy Gadian, in a signed affidavit with the Philippine Senate, exposed direct military involvement of US troops in combat operations in the Philippines. The affidavit also contained detailed information regarding permanent structures built by the American military forces in Camp Navarro, which is prohibited by the Philippine constitution.

“We hold President Aquino directly responsible for the botched operation, and for being a loyal puppet of the US-led war on terror,” said ACT President Benjie Valbuena.

“When we call for Aquino’s ouster, it doesn’t automatically mean that we want Binay as replacement,” said Professor Gerry Lanuza of Congress of Teachers for Nationalism and Democracy (CONTEND).

Vice President Jejomar Binay is widely seen as the top contender in the upcoming 2016 elections, also enjoying higher satisfaction ratings than the President since they sat in office. His ratings started to dip since the Philippine Senate hearings on his alleged corruption cases in Makati last year. The hearings were currently running for more than five months, until it was cancelled on the day of the arrival of the bodies of the #Fallen44. Those present in the hearing said that the hearings were cancelled “because national television networks will not televise the hearings.” Binay is currently facing corruption charges in Makati.

“We need a transition council that is comprised of civil society groups. Individuals with high moral integrity will be selected to form the body. This council will create an independent truth commission and hold Aquino accountable,” Lanuza stressed .

In her blog, Bagong Alyansang Makabayan (BAYAN) Chairperson Dr. Carol Araullo explained that after the resignation or removal of the president from office, the alternative transition council shall immediately work on the stabilization of the general economic and political situation of the country.

“The transition council is a formation…that will institute political and constitutional changes that will result in good governance, a just and lasting peace and the promotion of national interests amidst a foreign policy of friendship and non-interference in the affairs of other countries,” Dr. Araullo wrote.