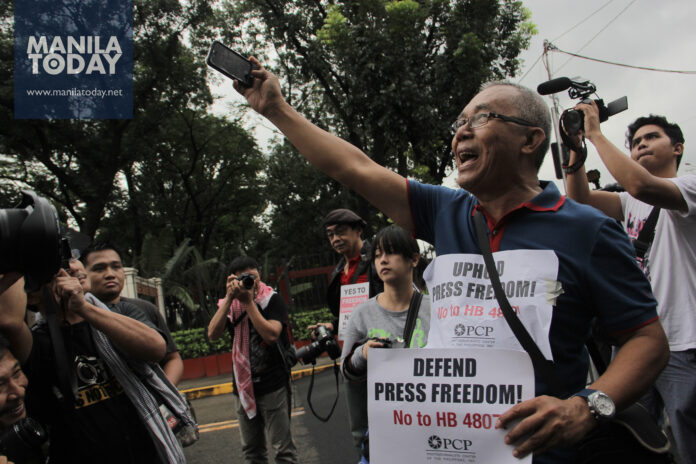 Photographers gathered at the South Gate of the House of Representatives in Quezon City to denounce and call for the immediate junking of House Bill 4807 or widely called “Anti-Selfie” Bill filed by Rep. Rufus Rodriguez of Cagayan de Oro 2nd District.

Mel Cortez, founder of BMSD Pilipinas said during the protest that “the bill only seeks to destroy freedom of expression in the guise of protecting privacy.” He also added that they believe “that personal privacy should indeed be protected at all cost and is provided by our constitution and laws. But it should not be used as an excuse to curtail freedom of expression, especially when it comes to matters of public interest.”

Rodriguez has said however in reports that the bill is not ‘Anti-Selfie’ but rather ‘Anti-Paparazzi’. A day prior the protest, the solon said though, in the plenary that he has already withdrawn his support for the bill.

Bayan Muna congressman, Carlos Zarate on the other hand said that with the intent of Rodriguez to ‘re-commit’ the bill, photographers and the people should remain vigilant in passing such kind of bills in the Congress. He also added that his party-list will work into finally junking the measure. Zarate exposed HB4807, which was already on its third reading in the plenary without consultation to stakeholders, to the media and dubbed it ‘Anti-Selfie Bill.’

Despite intermittent drizzle, protesters have continued their protest, which lasted for about half an hour. “Photography is an instrument of truth. Passing HB 4807 will be an instrument to silence not just photographers, but also every citizen. It is just a ploy to prevent photography from being used to expose the abuses of the powerful and corrupt,” Cortez concluded.