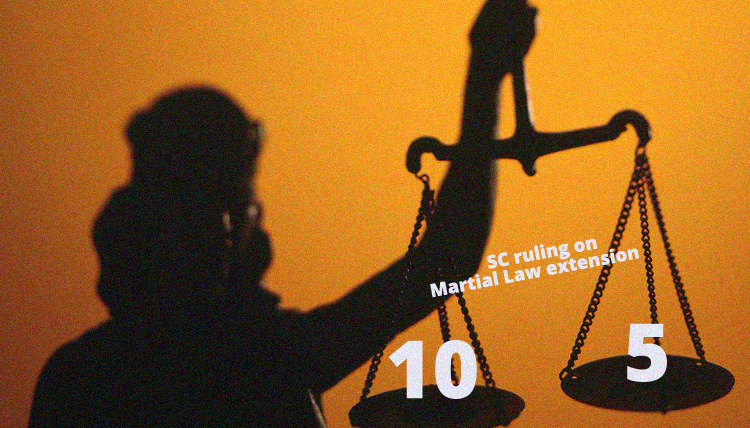 A human rights group in Mindanao expressed their condemnation against the Supreme Court ruling over petitions of various groups questioning the legality of the extension of martial law in Mindanao.

Barug Katungod Mindanao (Stand for Human Rights in Mindanao) called the SC’s upholding of martial law a go-signal for Duterte to “carry out naked fascism on all opposition on all fronts to his regime”.

The SC justices on Tuesday night voted 10-5 in favor of validating the constitutionality of the year-long extension of martial law over the entire island of Mindanao.

Four petitions were filed at the Supreme Court in January 2018, including Mindanao-based groups, people’s organizations, and the Makabayan bloc in the Lower House. The petitions questioned the “railroaded” martial law extension by the joint session of Congress in December last year.

Prior to its lifting on December 30, 2017, martial law in Mindanao was first extended on July 2017. The 60-day military rule was implemented by President Duterte last May 23, 2017 following the fighting that broke out in Marawi City between state forces and what the government identified as groups associated with Daulah Islamiyah.

The 10 judges of the high court who voted for the constitutionality of martial law include Associate Justices Tijam, Velasco, De Castro, Peralta, Bersamin, Del Castillo, Bernabe, Martires, Reyes, and Gesmundo.

The tribunal’s spokesperson Theodore Te announced the SC’s decision, saying that the Court found “sufficient factual basis” to legitimize Congress’ Joint Resolution No. 4. The resolution granted President Rodrigo Duterte’s request for the extension of martial law until December this year.

Barug Katungod Mindanao said that the junking of the SC justices of the petitions against extended martial law is a ticket to warrant Duterte’s “growing fascism and looming dictatorship”.

They added that the recent ruling “only shows that the Supreme Court is kneeling down before dictatorship and is cowering in fear to protect their own personal interests and the posterity of their careers”.

“The defeat of the people’s petition against the further extension of Martial Law consummates the wishes of a rising dictatorship to subject a third of the country to his militaristic whims and caprices,” said Barug Katungod Mindanao spokesperson Ryan Amper.

He stressed, “Duterte is now a step closer to imposing martial law nationwide and his being heir-apparent to the Marcos Dictatorship at this juncture of history, almost complete.”

Amper also added that more than half a million Mindanaoans have been forcibly evacuated since the Marawi siege and due to bombings of Lumad communities in the countryside. Hundreds of thousands of hectares of ancestral domain and Bangsamoro territories are up for grabs for investors, “as Duterte opens them up for wholesale bargains using tribal dealers at his command to legitimize the sell-out.”

Amper insisted, “Duterte has now combined the drug, terrorism, and communist bogey to legitimize his use of fascism to stifle dissent.”

The group also slammed the so-called anti-terror lockdown drills that will be conducted in the coming weeks in Davao City and eventually in other parts of the country.

The rights group sees this move by the Duterte administration as “trial balloons if not actual crackdown measures on all obstacles to the sinister schemes of the PNP and AFP even if these are clearly unconstitutional and violate all international human rights conventions.”

He said that Mindanaoans are decisively opposed to the further extension of Martial Law. A survey by the Social Weather Stations shows that 62% agreed to lifting martial law. Another study by Ateneo de Davao University conducted in October last year reveals that almost 60% of Davao residents want martial law to be lifted given that Marawi has already been declared “liberated”.