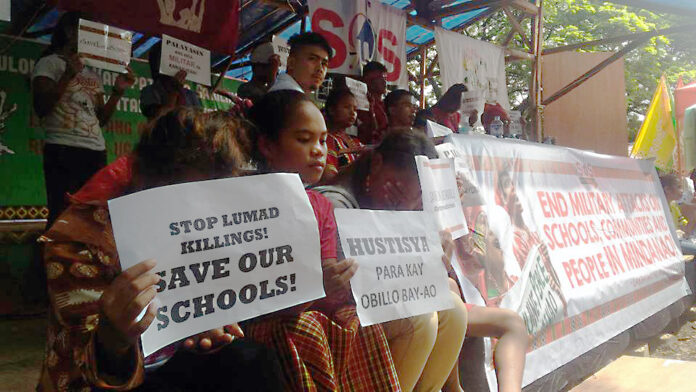 In a September 6 press conference, members of Save Our Schools Network expressed rage and condemnation over the recent killing of a Lumad student by identified militiamen in Talaingod, Davao del Norte yesterday.

Ben Salangani is an active member of Citizen Auxiliary Forces Geographical Unit (CAFGU) while Joven Salangani is a known member of paramilitary group Alamara. Joven is also responsible for the killing of 15 year old Salugpongan student Alibando Tingkas in 2015.

“After harvesting corn in their farm at around 2 o’clock in the afternoon, Obillo  was heading home when the Salanganis indiscriminately fired at him. Despite the wounds, Obillo managed to run towards their village. His mother immediately rushed him to Davao Regional Hospital. But due to the fatal gunshot wounds he sustained, he was declared dead at around 9:00 in the evening,” shared Rius Valle of Save Our Schools (SOS) Network Mindanao.

SOS Network Mindanao said the case further unmasked the fascist character of the Duterte government and this also clearly manifests in its genocidal attacks against the Lumads and Moros in Mindanao.

Valle highlighted that Obillo was among the 200 evacuees who fled their homes last July following the threat of Alamara to burn down Salugpongan. In August, evacuees went back to their community.

“Just like what we hinted, the elements of the Armed Forces of the Philippines (AFP) and its paramilitary groups would capitalize on the statement of President Duterte in perpetuating attacks against schools. Soldiers are highly motivated by Duterte to sow fear and terror among Lumad communities and even learning institutions intended for children,” Bonganay emphasized.

Rius said that the case proved that the AFP is supporting, funding and operating with the paramilitary groups like Alamara in Lumad areas in Mindanao.

During the press conference, Rius scored that Obillo was killed just four days after the second anniversary of Lianga Massacre wherein Executive Director of Alternative Learning Center for Agriculture and Livelihood Development (ALCADEV) was killed together with two other Lumad leaders.

“While Lumad students and tribal leaders are still conducting Lakbayan 2017 in Metro Manila to call an end to militarization and Martial law, military elements are killing their classmates in Mindanao. What have the Lumads done wrong to warrant this kind of treatment from the government?,” Valle questioned.

The SOS Network has called on other human rights advocates, concerned citizens and indigenous peoples and communities to express condemnation over the wanton killings of national minorities.