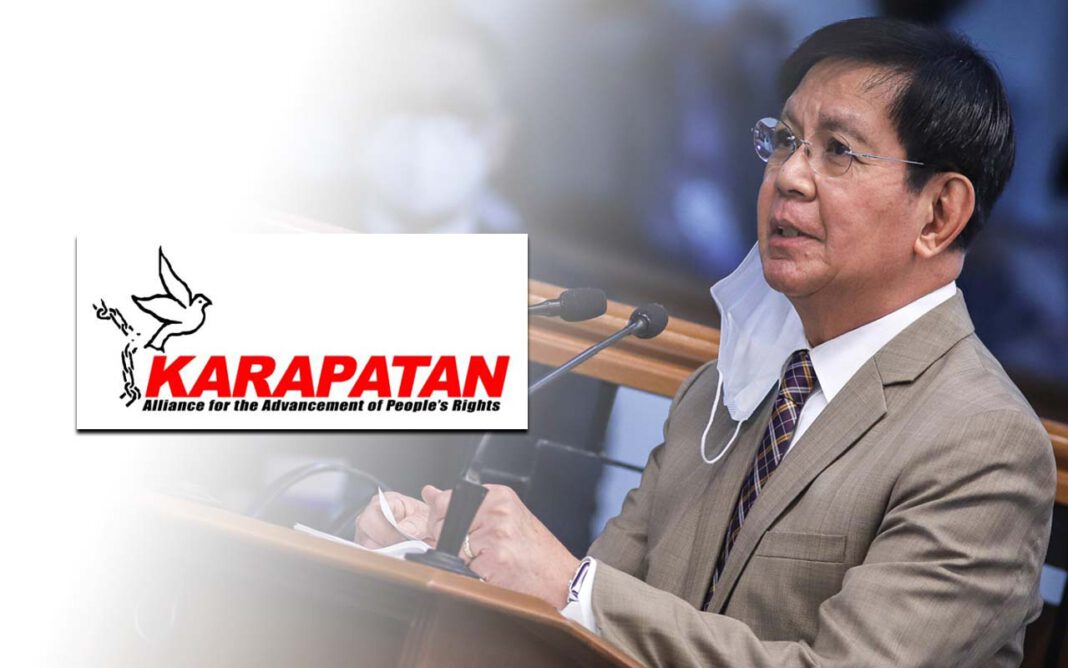 “I challenge Sen. Ping Lacson to come out with emailed or received copies of invitations to known HUMAN RIGHTS ORGANIZATIONS in the Philippines whom the Senate invited to the committee hearings. Karapatan and its members only knew about these hearings when media reports quoting generals come out,” said Karapatan Secretary Geenral Cristina Palabay in reply to Senator Panfilo Lacson’s statement that they invited to several hearings the groups that are now criticizing the anti-terrorism bill but they did not show up.

Palabay said they were able to participate and give position papers to the House of Representatives committee hearings because the Makabayan representatives informed us and insisted on inviting civil society.

The group’s officer mentioned, “Rep. Ruffy Biazon, to his credit, provided some space for this.”

Still, the group insisted that the proceedings did not amount to public consultations as many voices were not heard, including those of the peasants, workers, journalists, lawyers, and other sectors whose work or advocacy may be affected with the proposal.

“But all these proceedings cannot even amount to what is needed for public consultations especially for a crucial legislation such as the terror bill. Were the voices from Mindanao peoples considered? Were the peasants and workers asked to weigh in? Were the opinions of journalists and free expression advocates heard? The voices of the humanitarian workers, lawyers and health workers, whose future acts of providing service to their clients and communities may be interpreted as terrorist acts, were certainly nowhere in the picture?” said Palabay.

Lacson, one of the principal sponsors of the anti-terrorism bill in the Senate, said on June 4 that progressive groups, the Commission of Human Rights and other academic and legal experts were invited by lawmakers to work on the bill but did not show up.

[We have been inviting them, but they did not heed our invitation. Now that it has been passed in the House, they are making noise and spreading a lot of disinformation.]

He also replied to a tweet, saying the same thing.

In actual fact, we invited them to attend several public hearings called by the Senate Committee on Defense and Security last year but they did not show up. Now that both houses of Congress have approved the measure on final reading, they resort to disinformation.

A bigger number of people showed up at the University of Philippines (UP) Diliman on June 4 to protest the approval of the anti-terrorism bill in the Lower House on June 3. Hours before it was passed on third and final reading, a lightning rally among progressive groups were conducted outside the House of Representatives and UP Diliman a day earlier.

The Lower House fast-tracked the bill’s passage. It adopted and approved the approved Senate version at the committee level on May 29 and kept an unaltered copy throughout the plenary debates, rejecting all proposed amendments and shelving their own bills on the same measure so as to not go through a lengthy bicameral process. President Rodrigo Duterte, who certified the bill as urgent on June 1 to dispense of the three-day rule for approval between readings, would now only need to sign the bill for it to become law.

The bill works in conjunction with the government’s counterinsurgency program, where National Security Adviser Hermogenes Esperon once said the anti-terrorism bill is a better tool than martial law.