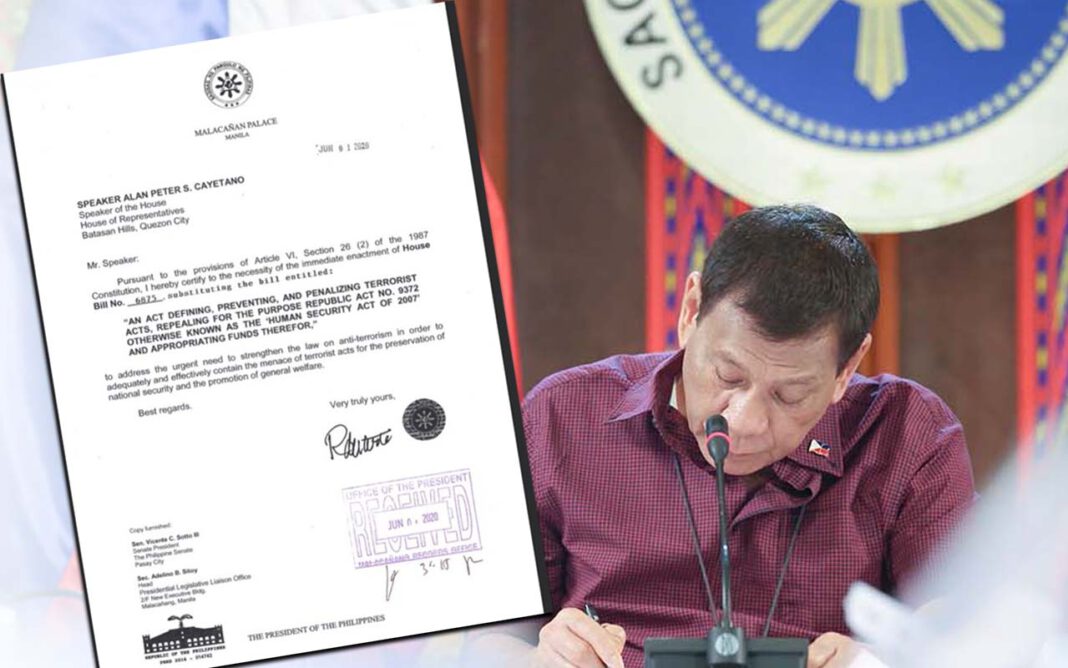 President Rodrigo Duterte certified House Bill 6875 “Anti-Terrorism Bill” as urgent to fast-track its approval on June 1. That the bill would be certified urgent was heard earlier in the day from Department of National Defense Secretary Delfin Lorenzana.

Today is the first day of general community quarantine or the “new normal” in Metro Manila after 77 days of lockdown the government imposed to address the COVID-19 outbreak in the country.

“We are appalled that the Philippine government is giving priority to repressive legislation but remains bungling in addressing the pandemic. We have seen too many deaths both from the virus and the violence President Duterte has unleashed against his people,” said International Coalition for Human Rights in the Philippines (ICHRP).

The Anti-Terrorism Bill, dubbed by critics as the “terror bill”, sought to replace and upgrade the country’s current Human Security Act (HSA). If made into law, the new version would allow warrantless arrests, detention for up to 30 days of suspected terrorists, and even wiretapping and other surveillance for extended periods of time that many groups assert are violations against the right to security and privacy, curtailment of the freedom of expression, freedom of association, and the right to due process.

“The terror bill erodes the freedoms and liberties of Filipinos which are inalienable, guaranteed by their Constitution and the Universal Declaration of Human Rights and other internationally agreed-upon instruments to which the Philippines is a signatory,” ICHRP asserted.

ICHRP reiterated that the proposed Anti-Terrorism Bill is the last piece of the puzzle of the Duterte government’s martial law.

Human rights group Karapatan said on Friday as the bill was approved in House joint committees that tabled it that the legislators “basically threw out all the position and recommendations of human rights organizations and international experts in the name of fast-tracking the Duterte regime’s desperate bid to crush dissent, civil liberties, and people’s rights.”

“We don’t need a law that will further erode the already dismal human rights situation in the country. Further unleashing State terrorism upon the people in the middle of a health crisis will only result to more lives lost,” said Karapatan.

In a statement, PAMALAKAYA said that the anti-terrorism bill could be “weaponized” against activists fighting for democracy and even ordinary critics and oppositions of the administration.

“Just on the same day that the anti-terrorism bill was being pushed in the congress, the National Task Force in Ending Local Communist and Armed Conflict accused us and other democratic groups as being the above-ground organizations of the armed group New People’s Army. Our taxes are being put into waste for funding this useless task force that spreads ridiculous anti-communist hysteria,” Fernando Hicap, PAMALAKAYA National Chairperson said.

The National Union of Peoples’ Lawyers (NUPL) said should the bill become law, it will only serve to worsen the climate of impunity that has made the Philippines fertile ground for extra-judicial killings, illegal arrests, and crackdowns against activists and progressive organizations and even ordinary citizens.

“Those who may think that these warnings amount to fear-mongering need only recall the events of the past two months,” said NUPL.

BAYAN Metro Manila said the definition of terrorism in the current and proposed law is too vague and overbroad that a mere protest against a government policy could be tagged by authorities as a terrorist act.

“When the country is in dire need of social and economic reforms, our legislators have conspired with Malacañang in passing a law that will enable Duterte to rule the country like a dictator…We will not back down as we continue to call for the junking of this draconian measure. To resist is justified,” said BAYAN Metro Manila in its statement.

When the House joint committees that tackled the anti-terrorism bill approved the measure on May 29 to send it to the last plenary sessions of Congress before it adjourns on June 3, #JunkTerrorBill and #OUSTDUTERTENOW became trending topics on Twitter.

#JUNKTERRORBILLNOW became a trending topic on Twitter again on the day Duterte certified the Anti Terrorism Bill as urgent.

What’s the purpose of it now?
Terror Bill is not what we need now. #JUNKTERRORBILLNOW pic.twitter.com/8cu4QBU89J

Why do we need to #JunkTerrorBillNow? The lockdown alone has seen a surge of murdered human rights activists, peasant organizers and advocates, as well as farmers. All of them were harassed by the military, red-tagged and vilified as terrorists before they were brutally killed. pic.twitter.com/pSa12KJAQ3

Hi guys! Please take time to read this and sign the petition to #JunkTerrorBillNow https://t.co/CexQCDK9nM

are you telling me that the anti-terrorism bill that you speak of is more urgent than the safe transportation of employees during GCQ? ive said this countless times, THERE ARE MORE IMPORTANT MATTERS TO ATTEND TO. RIGHT NOW IS NOT THE TIME FOR THIS #JUNKTERRORBILLNOW pic.twitter.com/bvQurt65QE

I'M A CITIZEN OF THE PHILIPPINES AND OUR RIGHTS AND FREEDOM ARE BEING THREATENED WITH THE PROPOSED BILL IN THE CONGRESS THAT'S ALREADY IN THE SECOND READING RIGHT NOW. #JunkTerrorBill #JUNKTERRORBILLNOW pic.twitter.com/8RnvRqA4Ly

THIS WILL HAPPEN TO US IF TERROR BILL WILL BE IMPLEMENTED IN OUR COUNTRY! WE SHOULDN'T LET YOUR PRESIDENT TAKE OUR RIGHTS FOR FREEDOM OF SPEECH!!#JUNKTERRORBILLNOW pic.twitter.com/IUyyWhglWE

this is what's happening to the philippines right now, AND THE BILL ISN'T EVEN PASSED YET! more of this will happen if it will, the police has complete power over everyone & NOBODY is safe.