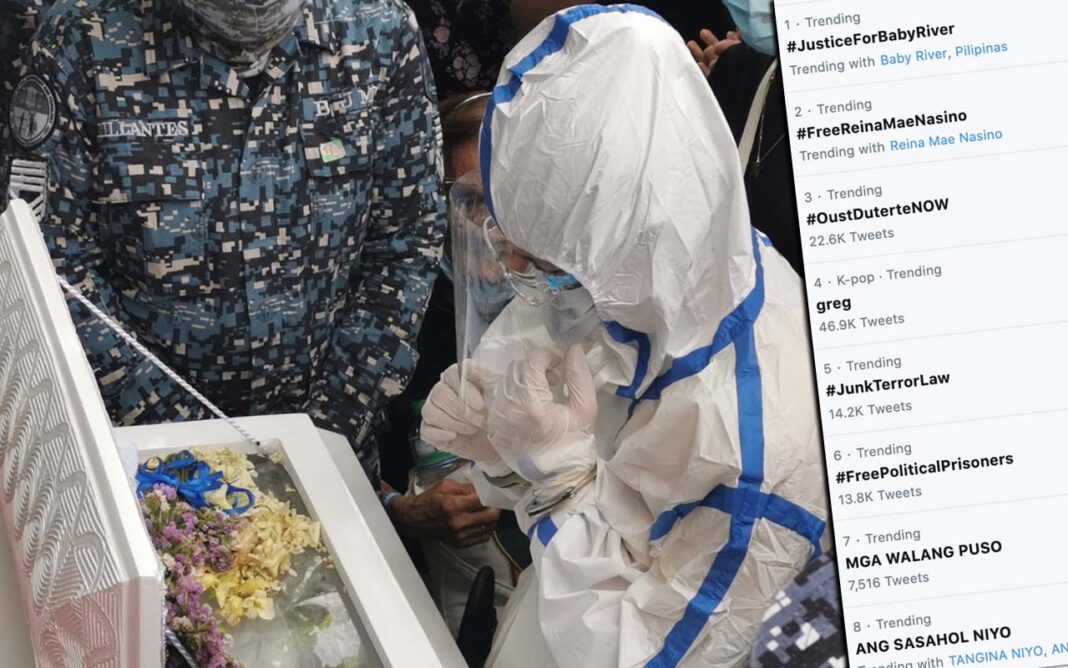 ‘Rest in peace’ is what we would customarily say as we pay our last respects to the deceased.

But this was very hard to utter even as courtesy following the events of the last three hours in baby River’s funeral up to her burial.

Three-month old River Emmanuelle who succumbed to pneumonia on October 9 and hospitalized only six weeks after she was separated from her political detainee mother Reina Mae Nasino was laid to rest in the Manila North Cemetery on October 16.

The day has been anything but restful or peaceful.

As wake-goers and sympathizers arrive at the time of the last mass and baptism for River, more than 20 police lined up in front of the funeral parlor preventing people from entering the wake. A file of them bearing truncheons covered the entrance. A SWAT team and SWAT vehicle was around. A firetruck–usually present for purposes of crowd dispersal when there is no fire to be put out–was also present.

The mass for baby River almost did not push through because of police barricading the entrance and barring people from entering, including priests and church group assisting the mass. A mass or baptism was required before the baby was laid to rest as she was not baptized prior her death.

Police harassed wake-goers, preventing them from holding up placards saying “Justice for Baby River,” giving the reason that this is prohibited but citing no law being violated. There is not any.

Why the police was in the funeral when Nasino was not there–whom at least 47 of them escorted in October 14 in the first of two three-hour furloughs granted by the court–this is not clear. BJMP Spokesperson Xavier Solda in an interview with ANC said this could have been part of the security protocol.

Police directed the time the casket was taken out. They also commanded the funeral vehicle to run ahead, leaving behind the wake-goers and family in confusion and pain.

The police took the baby’s casket inside the Manila North Cemetery without the presence of the family.

Inside, Nasino was present at around 12:30pm despite her scheduled three-hour visit at 1-4pm. She was flanked by police–Nasino stood over the casket, and all the police unrelated to them surrounding mother and deceased child. The rest of the family had to catch up.

Most sympathizers who wanted to attend the burial and some reporters were prevented from entering the cemetery. They stood in protest outside and waited until Nasino’s 3-hour furlough was over, and until baby River was buried.

Despite family and lawyer begging and pleading, the police did not remove Nasino’s handcuffs who can only extend her fingers to reach out to her baby. This also presented difficulty for her to wipe her tears, to wipe the sweat from her brow from the full PPE, face shield and face mask she was made to wear, and also difficult for her to drink water under the heat in the Manila North Cemetery. The police refused to remove the handcuffs when it was Nasino’s turn to sprinkle holy water on the casket, a rite of blessing from the family of the deceased. She was cuffed the whole time.

Many also decried how Nasino was not given privacy, space and respect to grieve.

Netizens also argued with pro-government supporters who were also actively posting on social media, while many still countered with the injustice of the way Nasino and baby were treated up until the baby’s last minutes on earth.

Kadamay Manila community organizer Nasino was arrested along with Ram Carlo Bautista of Bayan Manila and Alma Moran of Manila Workers Unity in an office raid via a search warrant issued by Executive Judge Cecilyn Villavert. Police said to have found explosives and guns in the Bayan Manila office in Tondo that led to the arrest of Nasino and two others. Nasino has been detained since November 5, 2019, and found out about her pregnancy only in jail.

Similar events happened in Negros and also in Manila days earlier Nasino’s arrest, with an activist couple and their two children arrested in Manila and more than 50 activists in Negros using search warrants issued also by Villavert.