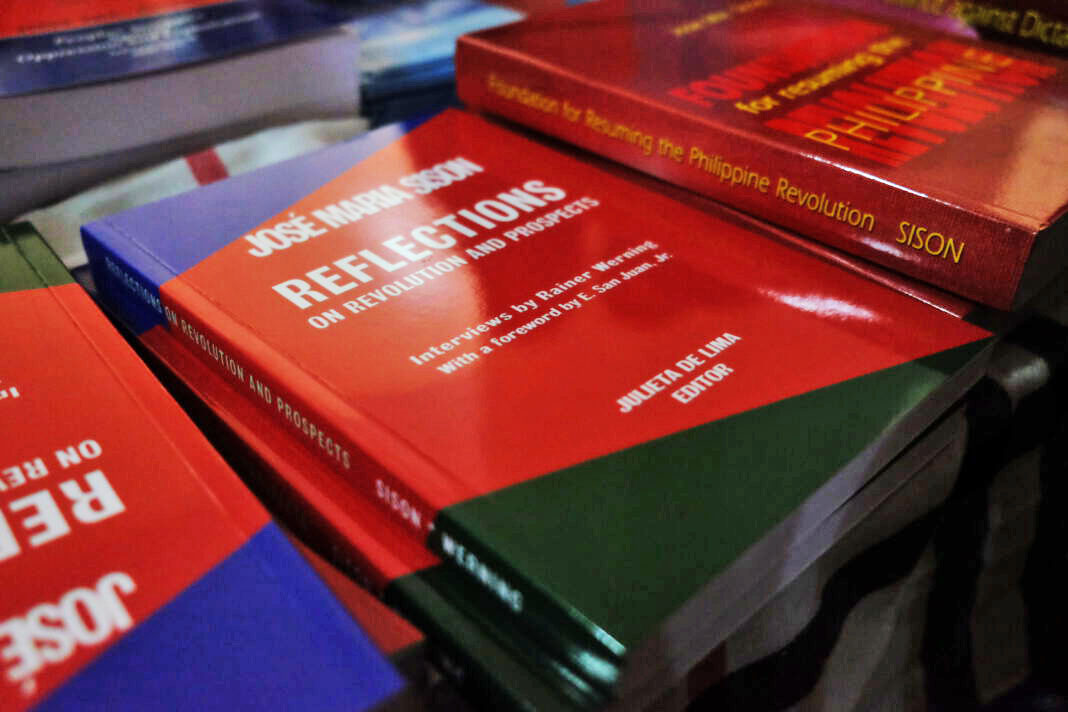 Joma Sison’s ‘Reflections on Revolution and Prospects’ book was launched at the College of Education in UP Diliman two days before his 81st birthday.

The book is an interview by Rainer Werning, edited by Sison’s wife, Julieta De Lima. It was published by the International Network for Philippines Studies.

“One of the most instructive sections of these interviews is Sison’s insightful critique of the neocolonial administrations since the fall of Marcos up to the current fascist Duterte regime. His discussion of the impact of global changes on the Philippine system, in particular the capitalist restoration in the former Soviet Union and in China, as well as the decline of U.S. global hegemony, gives us the framework for speculations on the prospects of the Philippine revolution amidst a worldwide socialist resurgence,” wrote University of Connecticut Emeritus Professor E. San Juan, Jr.  in the foreword.

The said book launch on February 6 was made possible by Bagong Alyansang Makabayan (BAYAN), BAYAN National Capital Region chapter, College Editors Guild of the Philippines, University of the Philippines Academic Union and Congress of Teachers and Educators for Nationalism and Democracy (CONTEND).

The launch was packed with students, teachers and attended by veteran activists.

“[‘Reflections on Revolution and Prospects’] is born of a material and spiritual kinship that has developed through 50 years and, I hope, would continue through another 50 years, part of which I expect to become solely spiritual. Though aged over a decade and located worlds apart, Joma’s and Rainer’s kinship started from their being Catholic sacristans,1 the former in Cabugao Ilocandia in Northern Philippines; and the latter in his own words, “in the plains of the Westphalian Münsterland in the northwest corner of …Teutonia, which of course means Germany,” said De Lima in a message.

The first German edition of the book Das Projekt Befreiung: Widerstand auf den Philippinen (Project Liberation: Resistance in the Philippines) was published in 1988 and the English edition, The Philippine Revolution: the Leader’s View was published a year later by the mainstream US and UK publisher, Crane Russak of the Francis and Taylor Group. It was then followed in 1993 by the second German edition, this time under the title Die philippinische Revolution: Eine Innennansicht.

De Lima shared that the book launched today was initially offered to Crane Russak of the Taylor & Francis Group, but was declined with the reason given being “that they do not publish the likes of the book” despite this being a sequel to the book they previously published.

De Lima said that a Filipino translation of the book will come in March.