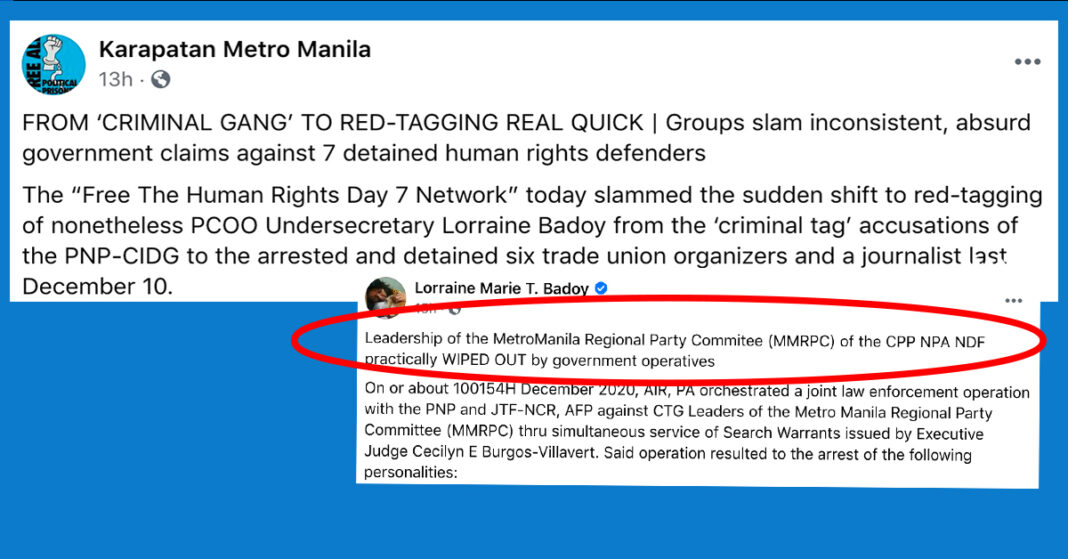 “From criminal gang to red-tagging real quick,” the group twitted.

The operation was made under the “intensified campaign against loose firearms and criminal gangs” as affirmed by PNP-CIDG.

However, the network deemed Badoy’s claim as “is in far contrast” to the PNP-CIDG claims alleging that the apprehended journalist and trade unionists were members of a “criminal gang” involved in loose firearms syndicate.

Badoy claimed in her recent Facebook post that the government operatives “wiped-out” the leadership of Communist Party of the Philippines’ Metro Manila Regional Party Committee in which she red-tagged the arrest of seven human rights defenders as alleged leaders of the CPP-NPA-NDFP.

Karapatan Metro Manila posed a questioned as regards the credibility of the Badoy’s agency based on her remarks.

According to them, “how can someone believe an inconsistent and ridiculous accounts from nonetheless Badoy and her cohorts if they themselves cannot consolidate and form a convincing case against activists?”

It must be noted that Badoy along with her agency had been grilled prior to the persistent remarks against progressive individuals, groups, even media outfits linking them as fronts of the communist movement.

Lawmaker solons had in fact called for her resignation due to her red-tagging remarks against them with which she denied saying that she “did not deceive the Filipino people.”

The network further suggested to both Badoy and elements of PNP-CIDG to “to first and foremost unify their fabricated myth and fake narratives on the background of the human rights defenders whom they have planted evidences such as firearms and explosives on their simultaneous raids last Thursday.”

“Given this kind of service from Badoy and the National Task Force to End Local Communist Armed Conflict, it is such a waste of our taxpayers’ money,” the network concluded.