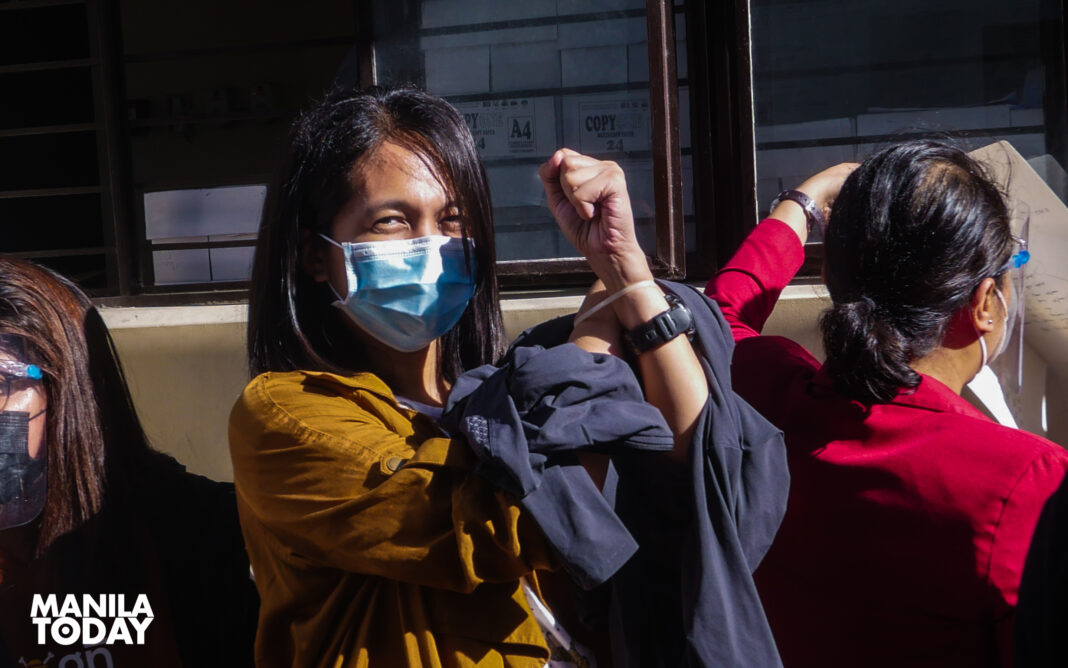 Contrary to her name Icy, the support system she is receiving never gets cold.

Individuals, groups, and institutions extended their support and called for the immediate release of Manila Today editor Lady Ann ‘Icy’ Salem. Icy is among the seven individuals arrested over alleged illegal possession of firearms and explosives—the common charges against activists—last December 10 on Human Rights Day.

The arrested are collectively referred as the #HRDay7.

In a short exchange with Altermidya, Icy revealed that the raiding team made them turn to their backs as they planted the evidence for an hour.

Days before her arrest, Manila Today had been one of the red-tagged media by the state on a Senate hearing from December 1.

Icy, as her kin calls her, received flooding support from friends, family, and those who believe in her innocence.

Atom Araullo, Salem’s colleague, expressed his disbelief of the accusations made against her in a tweet.

“Icy is a journalist and a former student leader. Authorities say they confiscated pistols, ammunition, and explosives in her residence. This is simply unbelievable,” Araullo exclaimed.

In a Facebook post, Salem’s sister Jasma Salem described how selfless and brave her ate is and asserted that the charges against her are all false.

“Noon pa man lagi niya iniisip ang kapakanan ng iba at magbigay kahit walang hinhintay na kapalit. Alam ko kakayanin niya to dahil matapang at independent siyang tao. Alam ko mas tatapang pa siya dahil patuloy niya ipaglalaban kung ano ang tama dahil wala katotohanan ang binibintang sakanya.” she said. [Even from before, she would always think of others’ welfare and give without expecting anything in return. I know that she can handle this because she is fearless and independent. I know she’ll be even braver because she continues to fight for what’s right, and there is no truth in what they’re accusing her of.]

Likewise, her brother Al Salem took to Facebook to defend Icy and condemned the police for failing to protect the rights of Filipinos and ensure their safety.

“For your information especially to those keyboard-warriors and brainless people who click and don’t think, my sister is a very intelligent, well-mannered, and highly educated person who selflessly care and help others without anything in return, even those she didn’t personally know. A very independent woman who often do not ask for any help from us despite of whatever hardships in life she’s into.

But now she was helplessly taken by those people who should be protecting our safety and rights as Filipino citizen,” Al pointed out.

Friend Bong Lazaro stated that Salem does not need the armaments the PNP and CIDG are claiming she owns as her “wit and charm” is enough to fight for the people.

“I doubt the intelligence and the brain function of the people who orchestrated Icy’s spurious arrest, and the crazy f**** armament she was supposedly in possesion of. She got no use for those. She already got what she needs to fight for the people, her smarts and her looks. She will slay you with her writing and make your dumbassary and treachery immortalized,” Lazaro decried.

Several groups also conducted a mobilization at Camp Karingal and Camp Crame last December 11 to condemn the series of arrests on Human Rights Day and to call for the release of #HRD7.

UP College of Mass Communication, in their statement, highlighted the service Icy has been giving to the marginalized as well as in upholding press freedom, taking pride in producing graduates like her.

“Icy cannot be guilty of documenting the plight of the marginalized in the articles that she has written and in the documentaries that she has produced. Her advocacy is her identity, even if it is now apparently the reason for her arrest and detention,” UPMC stated.

“That we produce graduates like Icy who opt to keep the torch of press freedom burning shows the quality of education we provide to our students. We teach them the value not just of seeking power of truth but also of speaking truth to power,” the college added

Her council mates from UP Diliman University Student Council 2003-2004 arranged a mass offering for her as well as for trade unionist Denisse Velasco who is also part of #HRD7.

Salem acted as the College of Mass Communication representative to the University Student Council. In her batchmates’ statement, they slammed the reason for her arrest.

“We denounce how her critical but rightful and diplomatic engagement with the government has led to her arrest based on trumped-up charges and planted evidence.”

National Union of Journalists in the Philippines ruled that her arrest proves that the government is insistent on suppressing critical voices in the media to ‘manipulate the flow of information’.

“Icy’s arrest is proof that this administration is bent on silencing the independent and critical Philippine media so it can manipulate the flow of information to the detriment of our people and of our democracy.”

The International Association of Women in Radio and Television, of which Salem serves as a communication officer, released a statement calling for her release and baseless charges against her to be dropped.

“The circumstances around Salem’s arrest and her continuing detention is a clear breach of international human rights and an alarming development in the dire situation that journalists and press freedom advocates continue to face in the Philippines. IAWRT, along with the rest of the global media community, continue to press for her release and that these baseless charges are dropped.

The International Federation of Journalists decries the state’s red-tagging of journalists and their attempts to ‘shut down, intimidate and silence journalists’ in the country. However, they maintained that these ‘blunt’ and ‘arcane’ attempts will fail to discourage the media community.

“The ongoing harassment of journalists in the Philippines on baseless links to political parties or ‘red tagging’ is the tactic of choice used by the powers that be to try shut down, intimidate and silence journalists. But the media community have not and will not be deterred by such blunt and arcane attempts. The IFJ condemns the climate of intimidation that makes a mockery of the state and system by use of these tactics which are completely unacceptable by global standards.”

The Free Lady Ann Salem Network was also launched to further amplify the demand for her immediate release. The Network had also started a petition which can be accessed and signed through this link: https://www.change.org/FreeLadyAnnSalem.

As of writing, her team awaits the prosecutor’s evaluation of the complaints against her. According to lawyer Kristina Conti, the earliest update could be tomorrow, Monday.