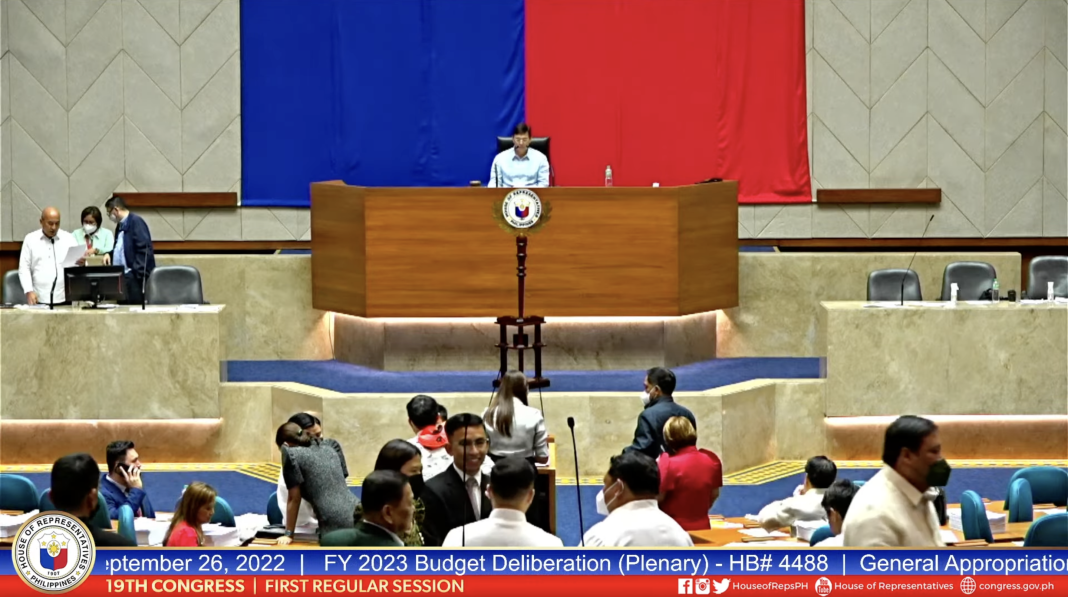 The Lower House of Congress passed the proposed 2023 national budget on second and third reading on September 28, 2022. Holding the second and third reading on consecutive sessions or on the same day was made possible after Pres. Ferdinand Marcos, Jr. certified the proposed legislation as “urgent.” The House of Representatives (HOR) passed the National Expenditure Program (NEP) 2023 as House Bill (HB) 4488 or the 2023 General Appropriations Bill (GAA).

The HOR received the NEP from the Department of Budget and Management on August 22, 2022. The chamber’s target was to finish budget deliberations before its break in October—a goal it was able to reach.

Important points about the NEP 2023:

The NEP 2023 or the proposed budget for next year is the biggest in history at P5.268 trillion. It is higher by P244 billion or 4.9% than the 2022 GAA of P5.024 trillion. However, despite the slight increase, social services such as State Universities and Colleges (SUCs), government hospitals, social welfare, and labor and housing sector received budget cuts.

Next year’s budget also features the biggest allotment for debt servicing in history, according to research group IBON. If to include the principal amortization (P1.02 trillion) with the interest (P582.3 billion) and net lending (P28.7 billion) payments, this will account for P1.6 trillion or 29.8% or 1/3 of the national budget. This will mean that for every peso revenue of the government, 44 centavos will go to debt payments, the biggest since 2011 when debt payments accounted for 68 centavos for every peso in government revenues. Debt payments are a part of the national budget that will not be used for the needs of the people.

The Department of Finance (DOF), however, said only interest and net lending are counted (amounting to only 11.6% of the 2023 budget), as the principal amortization is not part of new debt but only passed on to a new creditor. Also, the DOF said that while the allotted debt payments for 2023 is higher than the 10.8% in 2022, it is smaller than the 12.4% allotted in 2021.

Even the Congressional Policy and Budget Research Department (CPBRD) pointed out that while the proposed budget increased by 4.9% from last year, debt interest payments saw a greater increase (same pattern in 2021 and 2022) at 12.9%. The CPBRD said that while a bigger chunk is eaten up by debt payments, the productive part of the budget for the operation and implementation of the government’s programs gets smaller. It also added that if the government cannot find ways to increase its revenues and continues to depend on debts and loans, debt payments in the national budget will just continue to increase. However, the government has only or mostly or primarily looked into increasing taxes or imposing new ones to increase its revenues, meaning the burden (both increasing revenues and debts) will just be passed on to the people.

The budget of the OVP under Sara Duterte will increase three-fold in her third year. Duterte asked for P2.3 billion for the OVP in 2023, a 223% increase from the P713.4 million OVP budget in 2022. The biggest chunks in the 2023 OVP budget are the P500 confidential expenses (funds for surveillance activities conducted by civilian government agencies to support the mandate of the agency), P620 million in “extraordinary and miscellaneous expenses” (same amount in 2022) and P2.2 billion lump sum funds for “good governance engagements and social service projects.”

Former Vice President Leni Robredo only got more than P 3 billion in her six years in the OVP and did not get a share or asked for confidential expenses during her term.

Unprogrammed funds are not part of the total P5.268 trillion budget proposal, despite being included in the NEP. There are conditions that are needed to be met, like target revenues or allotments for debt payments, before it can be used. But if the NEP 2023 is passed into law, the executive branch will have standby authority to use the allotment for unprogrammed funds. Recto also pointed out that in 2022, even if government’s revenue collection was lower than the target, 100% of the unprogrammed funds were still used.

The much-vaunted top priority education sector got the smallest increase among the DBM’s five priority sectors of the NEP 2023, while social protection budget even got cut.

**Budget for Department of Public Works and Highways at DOTR for Build, Better, More Program

***Budget for Department of Health (DOH) and PhilHealth

****Budget for Department of Social and Welfare and Development (DSWD)

From P51.2 billion in 2022, the Department of Labor and Employment (and its attached or related agencies will get P41.4 billion (or a 19.2% decrease). This is despite the establishment of a new agency, the Department of Migrant Workers or DMW (will include the Philippine Overseas Employment Administration, Overseas Workers Welfare Administration at National Marine Polytechnic). DOLE’s budget in the 2023 NEP is at P26.2 billion, lower than 29.9% or P11.04 billion in 2022. The budget of the DMW for 2023 is at P15.2 billion.

Contentions from the opposition

OP and OVP budget riddled with pork and funds that cannot be scrutinized publicly. Makabayan bloc legislators lamented how they were not given enough time to deliberate and scrutinize the budget of the OVP and the OP at the level of the House Appropriations Committee and also little time at the plenary. Other lawmakers adduce the lack of deliberations to the “tradition” of giving courtesy to co-equal branches of government, such as the OVP and OP, allowing their budget presentations to pass with little to no questions or changes.

The progressive lawmakers assailed the lump sum confidential and intelligence expenses in the OP and the OVP budget, as well as the lump sum funds or “pork barrel” for the OVP for “good governance programs” and the lump sum unprogrammed funds that will be controlled by the president, leading House Deputy Minority Leader and ACT Teachers Partylist Rep. France Castro to dub it as “Marcosian pork.”

Repeal of automatic appropriations for debt. Castro also called for the repeal of the law on automatic appropriation for debt servicing. She belied claims that education gets the biggest chunk of proposed 2023 budget. Instead, debt servicing will still get the biggest chunk and the education budget still falls short of the United Nations suggested 6% of the Gross National Product (GDP) or up to P1.3 trillion.

“The need to repeal the law on automatic appropriation for debt servicing has become more urgent as the public debt has become an albatross for the nation. The country’s debt is bloated by revenue losses from trade liberalization, overly generous fiscal incentives for foreign investors, and the guarantee of profits as the government assumes contingent liabilities.” Castro said.

The group filed HB 1783 asking to set aside at least 6% of the GDP for the DepEd, SUCs, TESDA, and other agencies and instrumentalities with mandates directly related to education, and HB 2220 repealing the automatic appropriations for debt service.

“The [Rodrigo] Duterte administration left a P12.79 trillion debt, most of which did not even go to the COVID-19 response or other social services,” the lawmaker added.

Unfunded needs of the people. After HB 4488 was passed by the Lower Chamber, members of the opposition raised that some important allocations remain unfunded, such as:

Three lawmakers from the Makabayan bloc—Castro, Gabriela Women’s Partylist Rep. Arlene Brosas and Kabataan Partylist Rep. Raoul Manuel—voted no against the proposed 2023 national budget, citing that the budget is numb to the needs of the people: granting too much lump sum funds to the president and vice president, bigger funds for military, police, war and surveillance, while funding for the poor remains scarce as various social services and aid suffered budget cuts, small budget increases or no budget at all.

Other opposition lawmakers such as or those who have aired dissent on some provisions of the budget still voted yes with reservations to the bill. Albay Rep. Edcel Lagman said the country needs a timely-approved GAA for the operations of the government and to avoid the re-enactment of the 2022 GAA.

Camarines Sur Rep. Gabriel Bordado, Jr. voted yes with reservations and appealed for additional budgetary allocation to Department of Education for the special children project, the state universities and colleges, for the DSWD for the 4Ps beneficiaries.

Minority Floor Leader Marcelino Libanan voted yes with reservations but did not explain his vote.

House members voting in favor of HB 4488 number to 289 and with none abstaining.