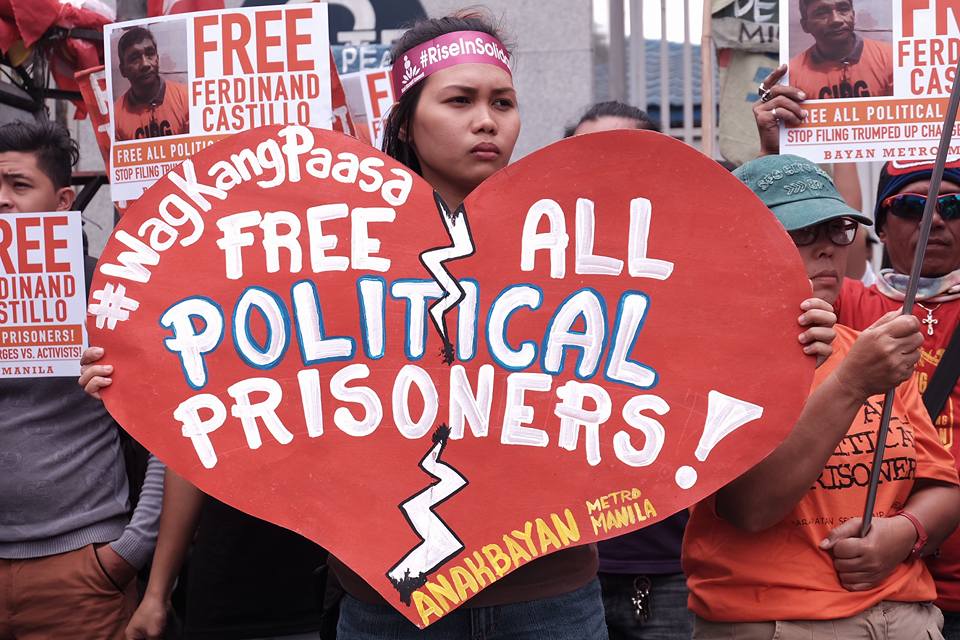 At past 8pm on February 13, he was allowed to eat on his own. His rice and viand were packed in what market retailers would call “1-kilo plastic bag.” He wrapped his right hand with one of those clear plastic bags so he could eat with his hand. He could probably have eaten with his bare hands, as Filipinos are wont to do, but not if he has not washed them after a grueling 30 hours. It was his first time to eat since 9pm the day before.

In a few hours from then, there would be an eruption of Valentine greetings, roses, chocolates, stuffed toys, dates and dinners. This would of course be far from his mind and none of his present surroundings could conjure up what is usually a celebratory, consumerist day.

Ferdinand Castillo, an activist illegally arrested on February 12 and detained inside the national police headquarters Camp Crame, ate a late dinner inside the facility of his jailers with the handcuff still attached on his right hand.

He would later sleep in the same room where he ate, without much trainings, his hands cuffed.

Matters of the heart

Castillo, 57, suffered from rheumatic fever in 1995. His body was paralyzed for two weeks and he had to take medication of Penadur for two years. He blamed this on his negligence of his health, for being consumed by and with his work in service of the people. Due this, he became afflicted with rheumatic heart disease as well.

A heart enlargement resulted from rheumatic heart disease. It was then found out that his heart had a left axis deviation. This then resulted to an irregular beating of his heart, or arrhythmia. This has caused him a condition of skip breathing that muddled his blood pressure. He would then suffer from hypertension, a type of hypertensive heart disease that may cause cardiovascular diseases such as stroke, heart failure, and renal disease.

He had survived two strokes. But he suffers also from transient ischemic attack, also known as mini strokes.

Castillo is on a diet of indigenous fruits and vegetables since 1995. It was what he and his family could do to prevent the fatal consequences of his various illnesses.

Castillo informed those who arrested him that he had several health conditions and was told while still in the vehicle that he would be brought to a hospital. But he spent a night not knowing where he was, an air-conditioned room on the third floor, barely slept through a night interrupted with interrogations, fingerprinting, photo taking etc.

The following day, he asked for a lawyer but they told him they would ask clearance for his request first. It was 10am when he was allowed to contact human rights group Karapatan and his group Bagong Alyansang Makabayan (Bayan) and the National Union of People’s Lawyers. It was then that his friends and family found out where he was in the last 16 hours he had been without communication with them.

For a man of his ailments, he should have chosen to rest. Instead, he continued to be an active fighter for workers’ rights and people’s welfare up to the day of his illegal arrest.

He came from a meeting on campaigning to end contractualization with Liga ng mga Manggagawa sa Central Caloocan (League of Workers in Central Caloocan) in Barangay Sta. Quiteria, Caloocan on February 12, 4pm, when he was nabbed by elements of the police Criminal Investigation and Detection Group (CIDG) and military Intelligence Service Group-Philippine Army (ISG-PA) and the Intelligence Service of the Armed forces of the Philippines (ISAFP).

(The ISG-PA was responsible for the abduction of activists Elizabeth Principe, who they made incommunicado for three days, and Jonas Burgos, still missing. The head of ISG-PA then was Eduardo Año, now AFP Chief-of-Staff.)

Castillo became a member of League of Filipino Students in his college days in the University of Philippines Diliman. He also became a member of the Gamma Sigma Fraternity. He soon answered the clarion call to the youth in those times of political strife and Martial Law.

Instead of a high-flying career, he went to the higher altitudes of Cagayan Valley to volunteer his skills and talents to the downtrodden in the region. He became co-founder of the Cagayan Valley Human Rights Organization, a member of the Northern Luzon Research Organization and a member of the Social Action Center in Ilagan, Isabela. He helped established the first chapter of Kilusang Magbubukid ng Pilipinas in Isabela in 1985. He helped organized the Sakbayan (campaign of people travelling from Cagayan Valley) to Manila to support the opening of peace talks between the Government of the Philippines (GRP) and the National Democratic Front of the Philippines (NDFP) in 1986.

He went back to Metro Manila as his health declined. He became campaign officer for Bayan Manila in 1997, then Bayan Metro Manila since 2007. He worked to help improve the conditions of the urban poor and the workers by empowering them to know their rights and the courses of action they may take to preserve their homes, jobs and dignity.

Castillo’s wife, a breastfeeding advocate and lactation specialist, tried to knock on the hearts of his captors.

And on Valentine’s day, activists and human rights advocates took to Camp Crame to protest the detention of the sickly Castillo.

He was told in the Caloocan City Prosecutor’s Office 2pm on February 13 that a .45 caliber pistol and some ammunitions were taken from him, that felt inane to him as “the captors do not even bother to show you or other witnesses now how they pull out their planted evidence from you.” He was charged with trumped-up cases of double murder and multiple murder from an encounter of the AFP and the NPA on March 2014 in Lopez, Quezon—essentially happenings in a civil war in the country beyond the responsibility or blame of one person. His inquest was scheduled on March 7, with possibly a witness to identify Castillo in the crime.

But Castillo is no NPA, even if his health was not enough for state authorities to go figure that out. Bayan Metro Manila rejected the accusation of Castillo being NPA, since he has been with them in planning for campaigns in the region. Well, there is also no NPA in Metro Manila as the armed conflict takes place in the countryside, if that would give more sense to many nonsensical notions abound.

The treatment of Castillo is a heartrending picture of, one would believe, how all other elderly or sickly prisoners have been treated by state authorities. One would also not forget easily, how an aging, emaciated political prisoner Bernabe Ocasla, fought for his life in the ICU of a hospital, died handcuffed to his hospital bed in December 2016.

READ: Release of political prisoners is a life and death matter

That the justice system in the Philippines serves to jail and treat inhumanly the best sons and daughters of the country and then free and rehabilitate plunderers and worst human rights violators is a heartbreak that would compete to top all heartbreaks on V-Day. A situation that we have seen and known for a long time, and one we should no longer agree to continue to suffer.