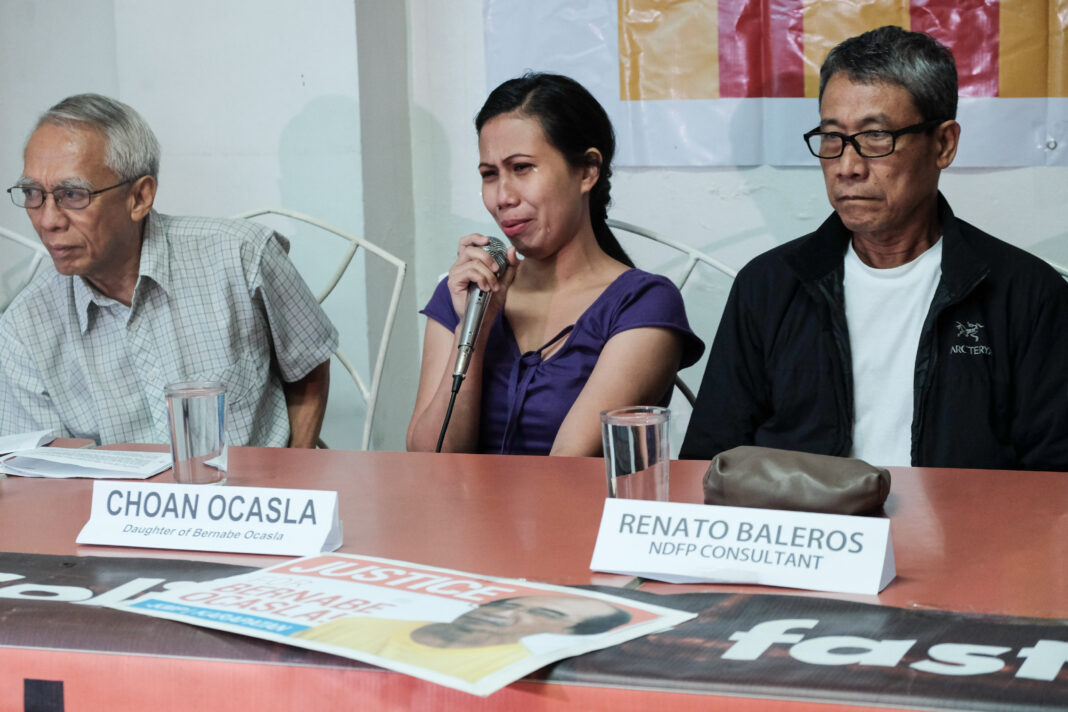 Bernabe Ocasla, 66 years old, a political prisoner for nine years died in Jose Reyes Memorial Hospital in Manila after his third and fatal cardiac arrest on November 28. He was in coma for three days after his blood pressure increased due to hypertension.

A peasant organizer from Calbiga, Samar, Ocasla was among the more than 70 respondents—including Benito and Wilma Tiamzon, Randall Echanis, Rafael Baylosis, Vicente Ladlad and Adelberto Silva—to a multiple murder case from a mass grave in Hilongos, Leyte filed by the Armed Forces of the Philippines. He was arrested in 2007.

Ocasla was among the 401 political prisoners listed as one of the the priorities and submitted by Karapatan to the NDFP and Government of the Republic of the Philippines (GRP) to be considered for release, following signed agreements by both parties in line with the peace talks.

“Natupad ang pangarap ng papa ko na makalaya pero nakalaya siya na nasa kabaong na (My father’s dream to be released from prison came true, but he will be released in a coffin),” said Choan Ocasla in between sobs during the press conference. Choan is the daughter of Bernabe Ocasla who is now working as a cashier in a mall in Manila.

Choan said that his father’s death would not have happened if the government fulfilled its promise to release political prisoners.

But since August 2016, only 19 has been released in line with the peace talks. Most of them were NDFP peace consultants and individuals protected by another peace talks signed agreement, the Joint Immunity on Safety and Immunity Guarantees. The released 19 participated in the first and second round of the peace talks, in August and October respectively. These releases were part of the agreement in the preliminary talks in Oslo in June before President Rodrigo Duterte took his oath of office. Two rounds of talks after, no releases followed.

“In the peace process (between the GRP and NDFP), there are agreements clearly stating the end the criminalization of political offenses, adhere to the Hernandez doctrine and release political prisoners,” said Casambre.

In the Joint Statement on the Second Round of Talks Between the GRP and the NDFP signed on October 9, 2016 in Oslo, Norway, the GRP affirmed its commitment to work for the release of the political prisoners. Both parties also agreed that the release of Joint Agreement for the Safety and Immunity Guarantees (JASIG) protected NDFP consultants, Eduardo Sarmiento, Emeterio Antalan and Leopoldo Caloza will be expedited through presidential clemency. The three consultants detained at the National Bilibid Prison are already convicted of alleged trumped-up cases.

The Comprehensive Agreement for the Respect of Human Rights and International Humanitarian Law (CARHRIHL) signed between the NDFP and GRP in 1998 also agreed that the GRP shall abide by the People vs. Hernandez (99 Phil. 515, July 18, 1956) doctrine which was further elaborated in People vs. Geronimo (100 Phil. 90, October 13, 1956).

Part III, Article 6 of the CARHRIHL states that the GRP “shall forthwith review the cases of all prisoners or detainees who have been charged, detained, or convicted contrary to this doctrine, and shall immediately release them.”

As of October 31, 2016, of the 401 political prisoners detained in different detention facilities across the country, 130 of them are sickly, 33 are elderly, 33 are women. Four NDFP consultants are still still detained, where the three are already convicted, according to Karapatan.

“The existence of political prisoners persists not because of the individual faults of the police or the court but because it is a continuing state policy since Martial Law until the present,” said Casambre.

“Non-bailable offenses are charged with the clear intention to prevent them from getting out of prison,” Casambre added.

“The continuing militarization in communities, which result to these arrests, happen under the government’s counter insurgency program, Oplan Bayanihan, which is being implemented since President Noynoy Aquino,” according to Karapatan Secretary General Cristina Palabay.

Palabay said that the Oplan Bayanihan is no different from the past administrations’ Oplans (operation plan), that have the main objective of crushing revolutionary groups in the country.

“The problem with these Oplans is that they do not resolve the root causes of the armed conflict. It only causes widespread human rights violations among the civilians,” Palabay added.

Renato Baleros, NDFP consultant who was released in August in line with the peace talks, recalled the difficult life in prison.

While in detention, Baleros suffered from lungs, liver and kidney problems and was brought to the National Kidney and Transplant Institute (NKTI) in Quezon City July this year. He was then detained at the Samar Provincial Jail in Catbalogan, Samar.

“Kung hindi ako nadala sa ospital ay maaaring namatay na rin (I could have died if I was not brought to the hospital),” said Baleros.

“Political prisoners are not criminals, they fight for the advancement of people’s rights, they fight for genuine change in our society,” said Cristina Palabay, Karapatan’s Secretary-General.

Gloria Almonte, wife of political prisoner Dionisio Almonte, shared with Manila Today that ever since 1978, her husband has been an organizer among students and peasants in Southern Tagalog advocating for their rights and social change.

Almonte said that anywhere he goes, people will look for him just to consult their problems including land problems and family conflict.

Dionisio was arrested in Valenzuela City on January 9, 2014 and is currently detained at the Special Intensive Care Area-1 at Camp Bagong Diwa in Taguig City. He is one of the severely ill political prisoners suffering from diabetes, ailments in the prostate, hypertension, slip disc and recently acquired tuberculosis inside the prison.

In the past weeks, GRP Chief Negotiator and Labor Secretary Silvestre ‘Bebot’ Bello III has repeatedly said that they will release 50 political prisoners before December 10.

However, in a statement the Communist Party of the Philippines (CPP) assailed the GRP’s plan.

“The planned release of a mere 40-50 political prisoners is an unacceptable token,” said the CPP. “Worse, they are being made to go through a tedious legal process which add to their agonizing legal ordeal after being made to face trumped up criminal charges, typically, possession of explosives which are unbailable.”

On the same day, Bello said in a statement that President Rodrigo Duterte signed an order granting presidential pardon to four political prisoners.

“These rebels have long been recommended for pardon but the previous government did not sign the draft order to release them,” said Bello.

Karapatan said the names of the four have been submitted to the Presidential Committee on Bail, Recognizance and Pardon and recommended to former President Benigno Aquino III, who did not act on their release.

“We hope that the rest of the 400 political prisoners will not suffer the fate of the four, who had to wait for government action for many years to see the day when they can be with their families again, nor that of the deceased political prisoner Bernabe Ocasla,” said Palabay in a statement.

Hunger strike for the release all political prisoners

“In behalf of the families of political prisoners, I am calling on President Duterte to release all political prisoners since he had promised this since the campaign period, when he became president and during his talks with NDFP consultants in Malacañang,” said Almonte.

Baleros reiterated the call and said that the government should comply with its obligation to release all political prisoners.

Political prisoners in different detention centers across the country are set to hold a hunger strike on December 3-10 to amplify the call for their release. Their families, former detainees and NDFP consultants are supporting them with a fasting at Mendiola bridge in Manila on the same dates.