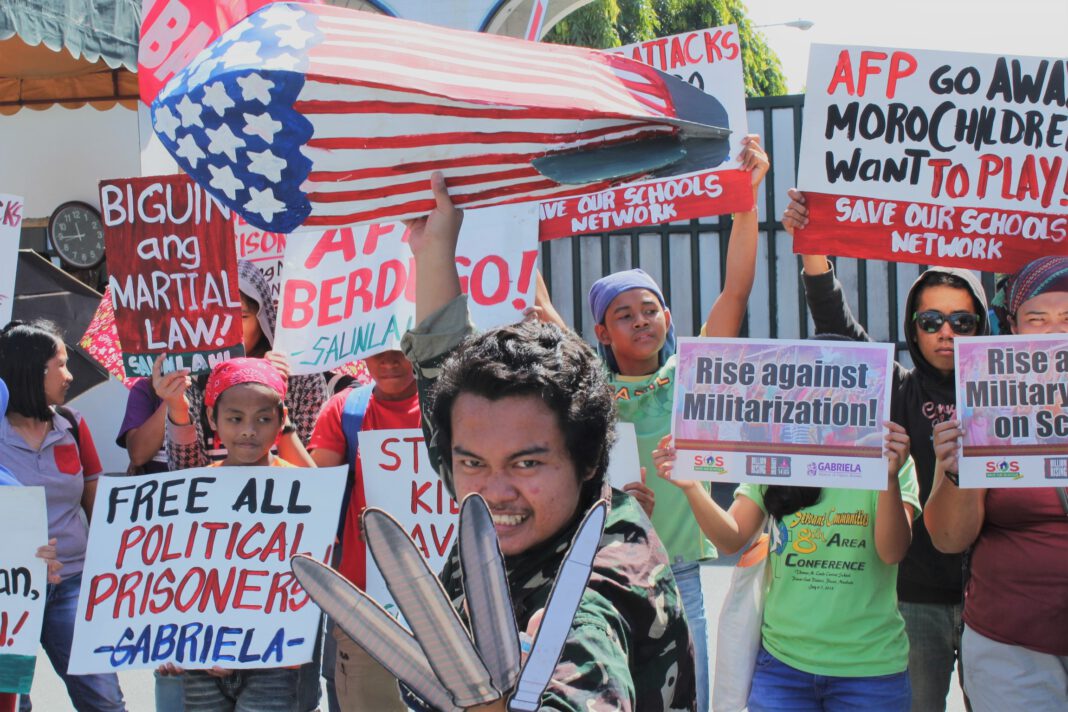 Lumad alternative schools campaign center Save Our Schools Network with child rights group Salinlahi Alliance for Children’s Concerns and Gabriela trooped to the Department of National Defense head office at Camp Aguinaldo in Quezon City to denounce continuing militarization and bombing in Lumad communities in Mindanao. These harassments, they said, were related to big mining and plantation activities that displace the Lumads from their ancestral lands.

According to the protesters, nine Lumad communities in Lianga, Surigao Sur suffer continuing and intensified airstrikes and militarization, where 244 families and nine Lumad schools are affected and have evacuated due to presence of the AFP and due to human rights abuses because of coal mining.

According to Salinlahi, the attacks on the Lumad communities have affected the Lumad schools, the education of the children and have made vulnerable to harassment by state forces  the women and children and all those who help the Lumad.

Eugenia Bay-ao, mother of slain 19-year old Grade 6 Lumad student Obello, recounted the killing of her son in the hands of an Alamara paramilitary group member and a member of the Citizen Armed Force Geographical Unit (CAFGU).

The protesters also cited the harassment case of Lumad educator Amelia Pond. The group said Pond has been in jail for more than a year, arrested and detained on trumped up charges. To the Lumads, Pond was attacked because she tried to teach Lumad students how to protect and defend their ancestral lands.

Relita Malundras, SOS Network Spokesperson and Salinlahi Deputy Secretary General alleged that cases of human rights violations of the Armed Forces of the Philippines (AFP) and its paramilitary groups have intensified specially after United States of America President Donald Trump visited the Philippines. Trump attended the 31st Association of South East Asian Nations (ASEAN) Summit and the 12th East Asia Summit in Manila from November 12 to 14.

The protesters also dispraised the continuing regime of Martial Law in the whole of Mindanao, in spite of government’s proclamations that Marawi has been liberated.