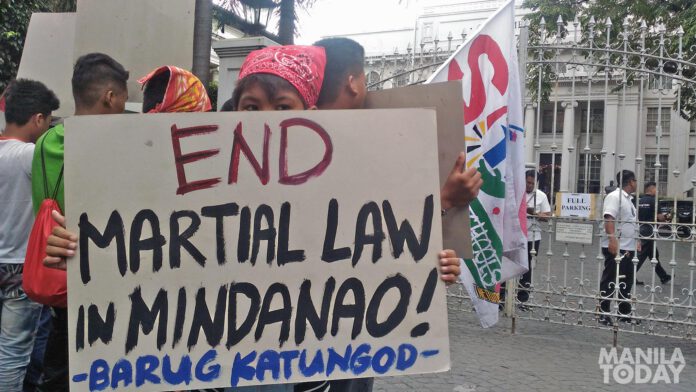 Mindanao-based groups Barug Katungod Mindanao, Save Our Schools Network, Kasalo Caraga, Kalumbay Northern Mindanao Region and Pasaka Southern Mindanao Region trooped to the Supreme Court (SC) and Department of Justice office in Manila today to slam the government agencies over the rising human rights violations in various provinces of Mindanao due to the continuing implementation of martial law in the entire island.

The groups said that martial law in Mindanao only caused fear and grave abuses against the rights of the people since its declaration on May 23, 2017.

The en banc denied three motions for reconsideration that appealed the ruling. The SC voted 10-3-1, denying the motions for mootness and lack of merit.

“We are enraged by this decision of the SC. By affirming martial law in our island, the High Court in effect is also affirming and legalizing the bombings, massacres, killings and attacks on the rights of the people of Mindanao,” says Ryan Amper, spokesperson of Barug Katungod Mindanao.

He added, “We urge the SC justices to review their decision and question the legalities of the Duterte’s militaristic rule in our land. We are still hoping that the SC will stand in favor of the affected innocent civilians in Mindanao and not those who bomb their communities and those who killed them.”

The group noted that the latest collateral damage of the martial law in Mindanao is the eight civilians killed and two others wounded in Lake Sebu, South Cotabato last December 3.

The groups also said that in essence, the SC decision is giving the president pretext to put the entire Philippines under martial law.

After their protest at the SC, the groups proceeded to the DOJ office to call for the junking of trumped-up charges filed against activists, leaders and individuals being critical to the anti-people policies of the government.

Amper insisted, “Martial Law in Mindanao and these trumped-up charges must immediately be junked.”

The groups further condemned the ‘ineptness’ of the DOJ to serve justice to hundreds of unresolved killings of indigenous leaders, farmers, Moro and human rights defenders who were victims of extra-judicial killings, trumped-up charges, intimidations and harassment perpetrated by the Armed Forces of the Philippines (AFP) and its state agents.

According to the group, in Mindanao alone, about 428 cases of trumped-up charges have been documented against individuals who are struggling for land, rights, education for Lumad communities and protection of the environment.

Amper said, “Clearly, the DOJ is in cohort with the Defense Department, AFP and the Philippine National Police (PNP) through the creation of the Inter-Agency Committee on Legal Action (IACLA).”

IACLA is reminiscent of the Inter-Agency Legal Action Group (IALAG) under the Arroyo administration that has been used against activists and human rights defenders. Amper said that this body is also a machinery of the Duterte government to intensify its tyrannical measures to quell dissent.

He added that with the intensification of attacks on communities and people, it is expected that the DOJ will work together with the AFP and PNP by issuing arrest warrants against leaders and members of progressive people’s organizations as a countermeasure against the growing resistance.

Barug Katungod Mindanao lamented that despite the creation of IACLA, activists and human rights defenders will continue to expose and oppose the anti-people policies of the Duterte government.

The protests were held days before the observance of International Human Rights Day on December 10.