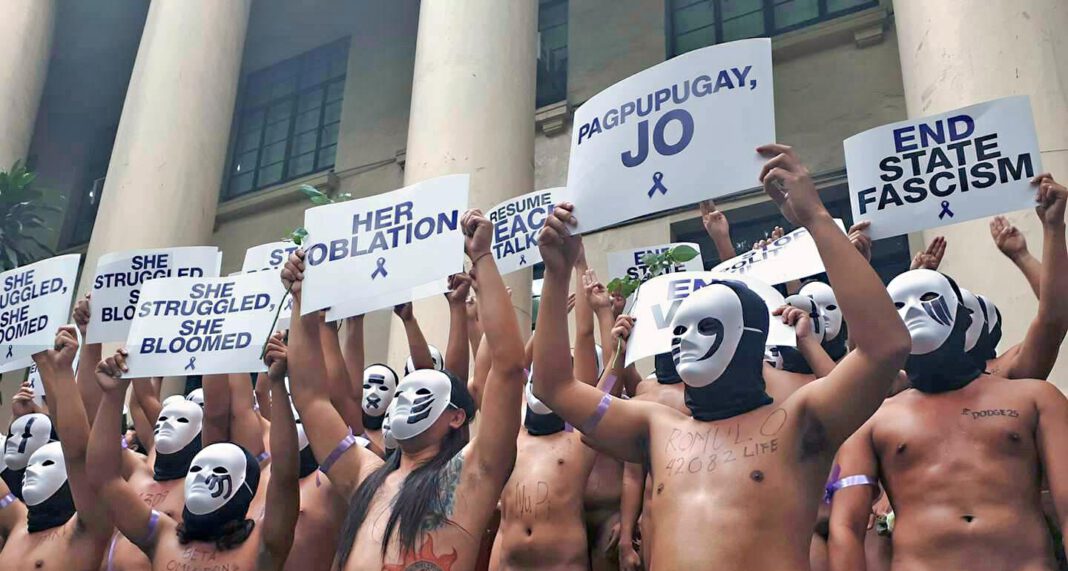 Members of Alpha Phi Omega (APO) in the University of the Philippines (UP) Manila offered the ‘Oblation Run 2017’ today for their fellow ‘Iskolar ng Bayan,’ Josephine Anne Lapira who was killed along with fourteen others by elements of the Armed Forces of the Philippines (AFP) in Nasugbu, Batangas on November 28.

Lapira was a biochemistry student and officer of the UP Manila chapter of women’s group Gabriela Youth.

Members of UP Manila APO ran naked at the Rizal Hall Steps of the College of Arts and Sciences today carrying placards signifying their salute to Lapira. Some fratmen held placards with the words ‘She Struggled, She Bloomed’ and ‘Her Oblation’ in purple-colored print as a form of their tribute to Lapira.

In a statement distributed to media, UP Manila APO said that while it is the duty of every ‘Iskolar ng Bayan’ to maximize their platform of honor and excellence to highlight issues that affect the country, there are times when that light needs not just to be shed not on just issue but on an individual who has taken the spirit of Oblation to heart.

Oblation Run or the “Ritual Dance of the Brave” is an annual event held by the UP chapters of APO in the different UP campuses nationwide, where runners traditionally run completely naked in public places to serve as a protest to contemporary national issues.

The event was first organized in 1977 at University of the Philippines Diliman to promote the film, “Hubad na Bayani” (Naked Hero). Oblation Run took its name from the statue Oblation, an iconic symbol of the university, that depicts a man facing upward with arms outstretched, symbolizing selfless offering of oneself to his country.

“Josephine Lapira, or Jo as she was fondly called, believed in women’s rights and gender emancipation above all. To some fortunate enough to be close to her, they know that she is more than the things she believed in,” says UP Manila APO.

They added, “Her service to the people and to the cause she believed in was inspiring as she turned principles and values into something tangible and real, a great feat of its own.”

The group described Lapira as “a student-leader, a gender-advocate with political beliefs that people may or may not agree with.” They added that Lapira will be remembered as “a loving daughter, a dedicated friend, and a passionate servant of the people.”

Fratmen of UP Manila APO noted that this year’s ‘Ritual Dance of the Brave’ was dedicated to the ‘one of the bravest women UP Manila has ever seen.’

“As she (Lapira) has once walked the halls of our esteemed University, so shall we run to remind the community of her legacy. We stand with all the women of the world, as Jo had, and fight for a world where they are free, empowered and unbound,” ended the frat’s statement.