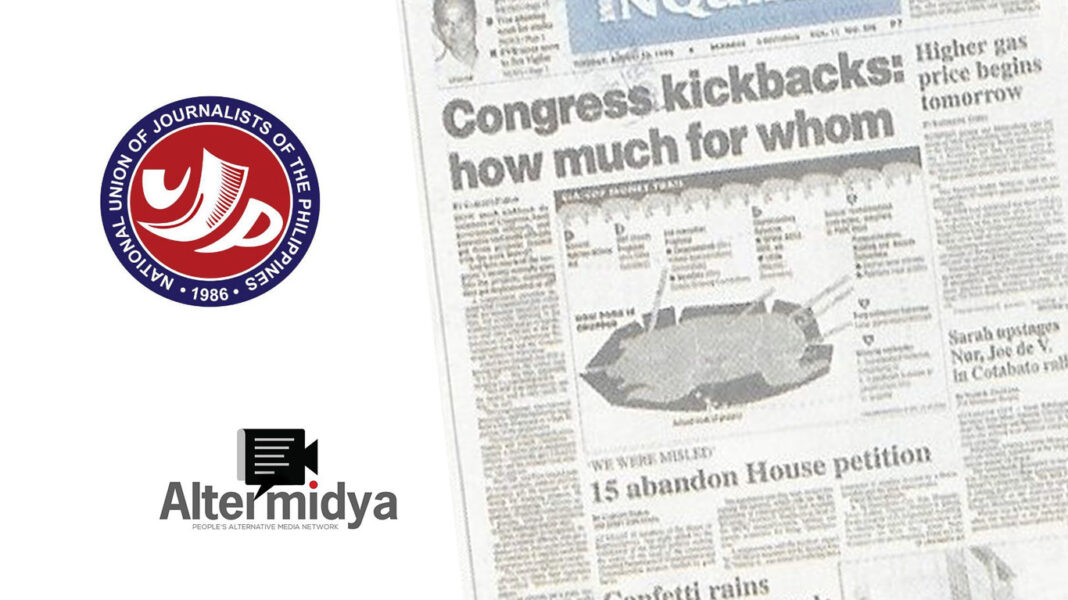 The National Union of Journalists of the Philippines (NUJP) expressed disappointment over the Philippine Daily Inquirer’s management-backed compromise deal to expunge award-winning investigative stories on the P10-billion pork barrel scam in exchange for dropping a libel case filed against them by DZBB radio broadcaster Carmelo Del Prado.

“It is not only a huge setback for press freedom in the country, but it spreads chilling effect among the ranks of the media besieged by attacks that have never been more brazen since the fall of the dictatorship,” the NUJP stressed in a statement on August 5.

In exchange for dropping a libel case filed against them in 2014, the Inquirer agreed to:

The print and online public apology were published on July 30.

“The documents do not show that Mr. Del Prado received payoffs or benefitted from the PDAF. We regret the inconvenience and adverse effects that the news reports may have caused Mr. Del Prado, his family, GMA Network and colleagues in the media,” the Inquirer said.

“We appreciate the statement published by the Philippine Daily Inquirer and posted on the Inquirer.net. That’s a welcome development. We are happy that with this clarification, we can finally put this issue to rest,” Del Prado said.

The post by GMA Online news also said that “an internal investigation by GMA Network Inc. in 2014 had already cleared Del Prado of links to the pork barrel scam.”

Apart from the chilling effect that this deal could create, the NUJP said that this sets a dangerous precedent.

“The Inquirer management’s tragic decision to submit to capricious demands sets a dangerous precedent and emboldens the powers that be to exploit criminal libel to restrict and gag the press from ferreting out the truth and live up to its duty in keeping the public informed,” said NUJP.

“The NUJP lauds Mr. Nolasco, Mr. Engracia, and Ms. Carvajal for standing by their stories and not bowing down to pressure,” said NUJP.

Nolasco, Engracia, and Carvajal refused to sign the agreement. This will leave them to face the legal battle on their own without the backing of the management.

“This only highlights the NUJP’s call to decriminalize libel and put a stop to the use of lawfare to silence the free press,” said the NUJP.

“PDI’s investigative reports on the pork barrel scandal brought to light information about which the public has the right to know. This kind of journalism is what is needed in these times – we are in the middle of a pandemic during which billions in public funds are unaccounted for, and when lack of transparency abounds in government,” said the group in its statement.

NUJP said the deal is “a complete departure from the Inquirer’s longstanding journalistic tradition of fearless and courageous reporting, a legacy that its late editor-in-chief Letty J. Magsanoc and countless other journalists have stood and risked their lives and names for.”