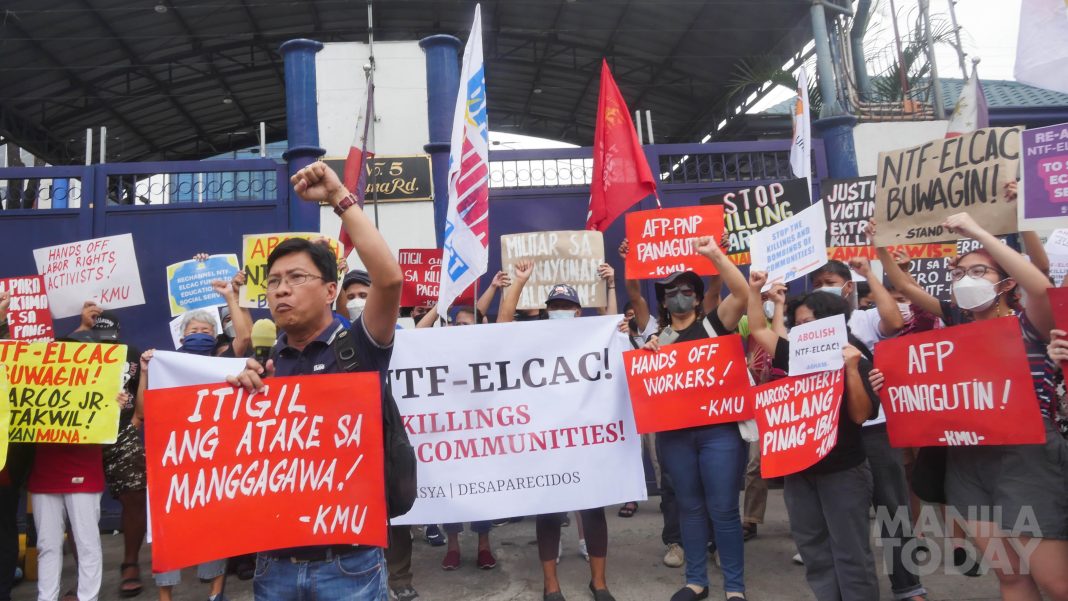 Incomplete documentation, low fund utilization and unutilized funds, unauthorized fund transfers, and lack of guidelines on the use of funds are only a few grounds to deter further or higher budget allocation to a government agency. However, the National Task Force to End Local Communist Armed Conflict or NTF-ELCAC is set to get a higher allocation this year on the onset—at the national budget proposal level.

For the 4th year, rights group Karapatan reiterated the call for NTF-ELCAC’s abolition. Along with various groups, they trooped to the National Intelligence Coordinating Agency headquarters to call for the rechannelling of the NTF-ELCAC’s funds to social service programs.

The group further slammed House appropriations committee chair and Ako Party-list Representative Zaldy Co’s proposal for the restoration of the P10-billion budget for the said task force at the bicameral conference committee.

Co admitted in the conference that the move was upon the instruction of House Speaker Ferdinand Martin Romualdez and Deputy Senior Majority Leader Ferdinand Alexander “Sandro” Marcos.

The much-detested task force helped its creator and head, former president Rodrigo Duterte, in his administration’s counter-insurgency efforts, but more popularly for red-tagging critics and activists.

Many of the victims amid relentless red-tagging campaigns ended up arrested and detained on trumped-up charges, while others have been killed by vigilante groups or in armed encounters staged by the military, said Karapatan.

“NTF-ELCAC’s budget may be restored as part of the horse-trading and dirty-dealing that go on, away from public scrutiny in the bicameral conference committee,” said Karapatan secretary general Cristina Palabay.

Such an approach has authorised military presence and detachments in the rural area even in the urban area to conduct an all-out-war against the Communist Party of the Philippines, New People’s Army, and National Democratic Front (CPP-NPA-NDF).

However, groups like Kilusang Mayo Uno were quick to refute the red-tagging made by NTF-ELCAC, linking them to the CPP-NPA-NDF.

According to KMU secretary general Jerome Adonis, the said task force has long infiltrated schools, communities, workplaces and other areas to mobilize fake surrenderees claiming to be members of CPP-NPA-NDF alongside the unwarranted and false claims against the group that they referred to as terrorists.

Adonis added that this tactic continued, even with the decision made by Manila Regional Trial Court Judge Marlo Malagar who denied the government’s bid to tag the CPP-NPA-NDF as terrorists.

The labor leader lamented how the people’s funds are being used for the activities of the NTF-ELCAC.

[It’s sad because their funds that are used to kill the workers, the natives, the youth, the women, and the urban poor come directly from the pockets of us ordinary citizens through our taxes.]

At least 56 workers killings were reported from 2016 to present, or since former president Duterte sat in power and up to the term of Marcos Jr.

Adonis meanwhile pointed out that the government should differentiate activists holding placards from revolutionaries wielding guns.

[We as workers under the KMU, we are not members of the CPP-NPA-NDF. But we believe in the reasonable and just struggle of the CPP-NPA-NDF and until the fundamental problem of landlessness, injustice, false industrialization is not resolved, the people’s armed and parliamentary struggle will continue.]

In the upcoming commemoration of International Human Rights Day (IHRD), Adonis and Palabay affirmed its symbolic value not just to memorialize victims but to continue fighting for people’s rights, given that this would be the first IHRD under Marcos Jr.’s watch.

Along with the rest of the progressive sectors, they called on the participation of the Filipino people to call for wage increase and lowering prices of basic commodities.

They also called for the immediate release of political prisoners, numbering now to more than 800.

Almost two years ago, several police pre-dawn raids on IHRD led to the arrest of six labor organizers and one journalist, collectively known as the Human Rights Day 7 (HRD 7). Four of the HRD 7 who remain in jail are trade unionists Romina Astudillo, Mark Ryan Cruz, Jaymie Gregorio, and Joel Demate. Manila Today editor and Reporters Without Borders Independence Prize nominee Lady Ann Salem alongside labor organizers Rodrigo Esparago and Dennise Velasco were released upon quashal of warrants and dismissal of firearms and explosives charges against them. On December 6, court hearings in Quezon City and Manila will be held for the cases of the HRD7 who remain jailed.