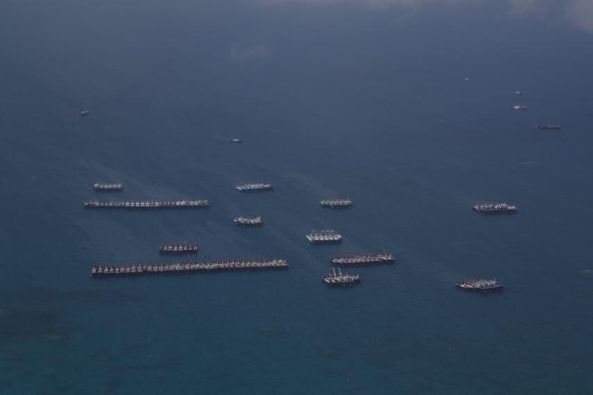 Armed Forces of the Philippines had dispatched troops and confirmed the ship’s presence 175 nautical miles west of Bataraza, Palawan.

Immediately, the Philippines has filed a diplomatic protest condemning the China’s another threatening presence over the disputed seas. However, the latter has denied the allegations; saying that the ships the country deemed as maritime militias are only fishing boats anchored to avoid the rough seas due to bad weather.

“Despite clear weather at the time, the Chinese vessels massed at the reef showed no actual fishing activities and had their full white lights turned on during night time” The National Task Force for the West Philippine Sea (NTF-WPS) said in a statement.

Defense Secretary Delfin Lorenzana called on the Chinese to “immediately recall these boats violating our maritime rights and encroaching into our sovereign territory.”

It must be noted that these territories are within the country’s Exclusive Economic Zone (EEZ) and Continental Shelf (CS) which permits Filipinos to have the sovereign rights in the area and explore resources.

The AFP Western Command has ordered additional deployment of Air Force and Navy assets to conduct sovereignty watches and further validate the report and ensure the security and safety of Filipino fishermen there. Still, the ships have ignored the demands to leave the area.

China’s action is no longer new given their narrative since their last year’s presence in WPS, claiming to be fishing vessels.

University of the Philippines Institute for Maritime Affairs and Law of the Sea director Jay Batongbacal said that the formation of the ships signifies they plan to stay longer in the seascape. He also added that the presence of Chinese vessels in the reef is the “escalation point” of China in claiming territory.