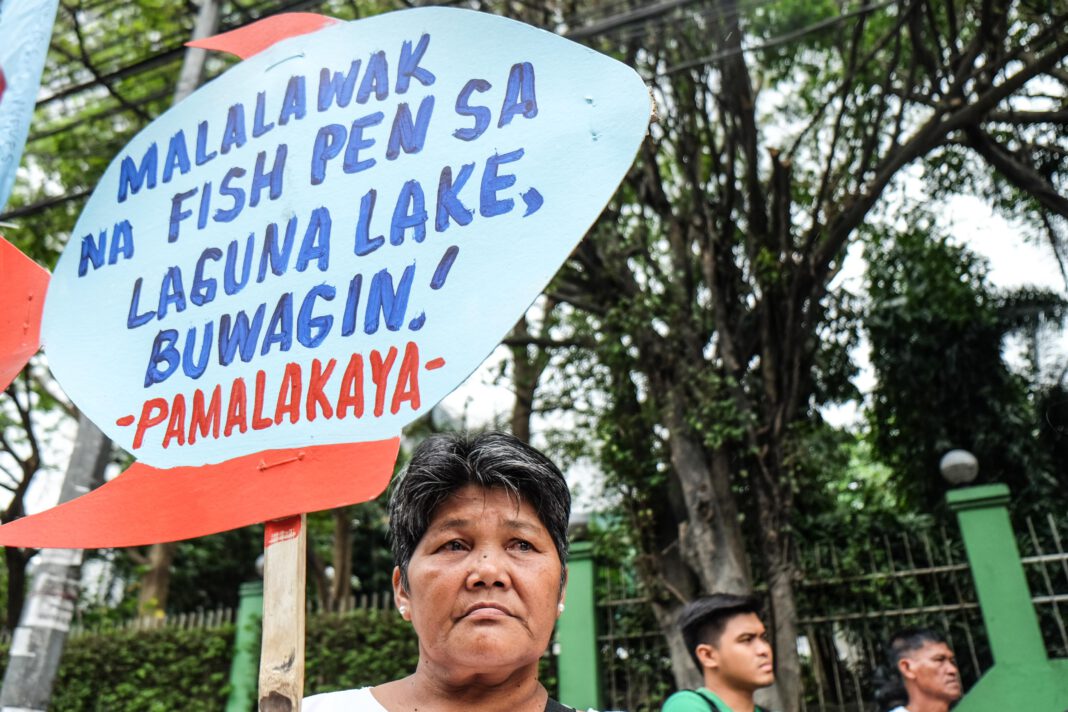 Fisherfolks and advocates under the Save Laguna Lake Movement (SLLM) called for the immediate removal of large and foreign owned fish pens in Laguna Lake.

The Laguna Lake Development Authority (LLDA) approved a board resolution on November 2016 ordering the removal of all large fish pens and the moratorium against installing new fish pen for one year.

In the LLDA resolution, all fish pen owners are ordered to voluntarily remove their structures until March 31, 2017, otherwise, the LLDA will forcibly remove the structures by April 1.

Molera said that when they talked to LLDA General Manager Jaime Medina when he visited Muntinlupa on February 8, he assured the fisherfolks the ‘baklad’ owned by small fisherfolks will not be included.

Small fisherfolks put up small structures called ‘baklad’ or fish corrals which serve as fish trap and keep fishes until they are fully grown.

In August 2016, DENR Secretary Gina Lopez announced that she will remove large fish pens in Laguna Lake to give way for a larger fishing ground to small fisherfolks. In addition, she plans to convert the lake into an eco-tourism area.

DENR Undersecretary Ipat Luna clarified in a dialogue with SLLM and Pambansang Lakas ng Kilusang Mamamalakaya ng Pilipinas (Pamalakaya) on February 13 that fish pen owners will be given ample time to harvest their fish. The structures will be demolished seven days after their harvest.

Usec. Luna further clarified that the one-year moratorium will start as soon as the fish from the last fish pen has been harvested. She said that the removal of fish pens aim to give way to a larger fishing area for small fisherfolks. According to her, the moratorium will also allow LLDA, DENR and other concerned agencies to clean the lake and re-assess its real carrying capacity.

LLDA is an attached agency of the DENR where Secretary Lopez is the Chairperson of its Board of Directors.

According to Pamalakaya, a study they conducted with SLLM reveals that corporate-owned fish pens occupy 60% or around 54,000 hectares of the total of 90,000 hectares aggregated surface area of Laguna de Bay.

“The carrying capacity of Laguna de Bay for aquaculture is only 10% of its size, meaning it can only hold up to 9,000 hectares of aquaculture. But even the LLDA’s conservative data shows that total size of fish pens in the lake has exceeded to its carrying capacity,” said Pamalakaya in a statement.

Molera expressed that whatever project will be implemented in the Lake, the effects on the residents around the like and fisherfolks should always be considered.

Molera expressed their support to DENR’s plan to remove large fish pens owned by local and foreign corporations as they have taken up most of the fishing grounds in Laguna Lake. However, he worries that small fisherfolks like him might get affected and lose their livelihood with the order to remove fish pens.

Pamalakaya Chairperson Fernando Hicap appealed to the government to not include the fish cages of the small fisherfolks.

Usec. Luna guaranteed the fisherfolks that they would prioritize the small fisherfloks in the application for permit to put up fish pens once they have implemented their one year moratorium. She also promised them that they will further clarify with the LLDA the guidelines of the removal of fish pens.

Molera said that the government should address the pollution in the lake to make it sustainable again.

But the government-led Laguna Lakeshore Expressway-Dike Project (LLEDP) which the SLLM consider as a threat still looms in the background.

LLEDP is a P122.8 billion Public-Private Partnership Project (PPP) that “will provide a high standard highway with a dike that will ease traffic flow and mitigate flooding in the western coastal communities along the Laguna Lake.”

The 47-kilometer expressway will run from Taguig in Metro Manila through the towns of Calamba to the Los Banos-Bay boundary in Laguna.

The project would also reclaim 700 hectares west of Laguna Lake and will give a 37-year concession to the winning private corporation.

Although the project did not progress during former President Noynoy Aquino’s term due to failed biddings, Department of Public Works and Highways (DPWH) Secretary Mark Villar was quoted in January that he would pursue the project.

On February 7, DPWH also announced that two lanes from Napindan to M. L. Quezon section in Taguig City of the Laguna Lake Highway, formerly known as C-6 Dike Road, would be serviceable by February 9. Construction for the widening of Napindan Bridge 2 is on-going and is expected to be completed by December 2017.

The C-6 Dike Road is to be connected to the planned megadike project.

Although Usec. Luna assured the fishefolks during the February 13 dialogue in DENR that they will not allow any reclamation in Laguna Lake, SLLM and Pamalakaya were still apprehensive.

Hicap expressed that residents along Laguna Lake should remain vigilant.

“Mas higit na kailangan mainform ang mga tao, mamonitor at masingil ang gobyerno sa pangako nito na hindi idedemolish (There is an urgent need to inform the people, to monitor the government that it will stay true to its promise not to demolish homes),” said Hicap.