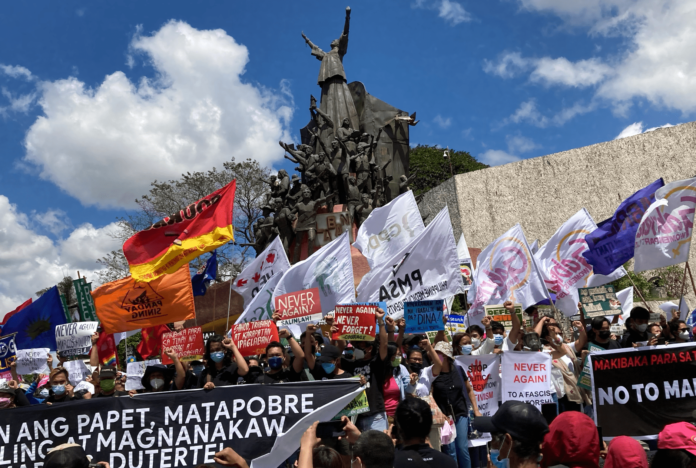 On February 25, thousands of Filipinos from different sectors and groups of society united and marched along Epifanio Delos Santos Avenue to commemorate the 36th Anniversary of the EDSA People Power Revolution to end the rule of the late dictator Ferdinand Marcos, Sr.

Groups led by Bagong Alyansang Makabayan (BAYAN), Campaign Against the Return of the Marcoses and Martial Law (CARMMA), Movement Against Tyranny (MAT), and Akademiya at Bayan Kontra Disimpormasyon at Dayaan (ABKD) turned the People Power Monument into a big classroom where speakers acted as teachers to expose the truth about the myths laid out by Marcos supporters.

The program with the theme “Ibalik ang Ninakaw, Hindi ang Magnanakaw” was attended by various groups of individuals including youth and senior citizens, different media outlets, teachers, and individuals who experienced the gravity of the abuses and corruption of the Marcoses.

They aim to let the nation know the horrors that the Marcoses has brought to our country. Flags, cards, and banners filled the EDSA monument to show their hopes and demands and recite their calls to stop the return of the Marcos regime.

They expressed how the May 2022 Presidential Elections is just around the corner and the tandem of the dictator’s son and namesake Ferdinand “Bongbong” Marcos, Jr. and the current president’s daughter Sarah Duterte had left a lot of groups and sectors feeling uncertain or threatened, especially the victims of Martial Law and the current regime.

They want to rectify the situation where the youth seem to lack knowledge of what really happened to the Filipinos during the Marcos regime. Though this has been part of the Philippine History taught in school, the knowledge was too shallow and incomplete, while some revisions also proliferated in or out of the schools and in social media. The goal of the 36th Anniversary of the EDSA People Power Revolution was to enlighten and retell the stories of sufferings experienced by the victim of the Marcoses and how they were able to defeat a tyrant.